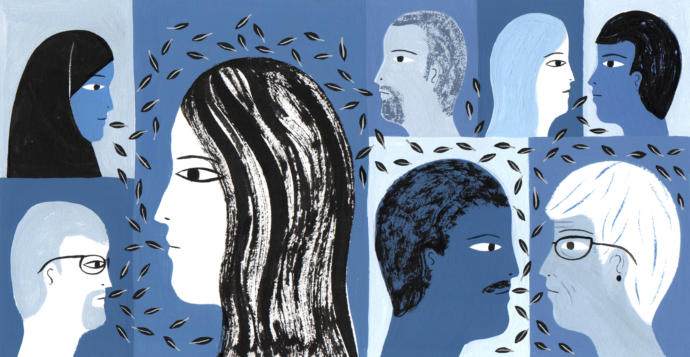 At The New Yorker, Jia Tolentino reflects on an Alabama-set documentary project in which citizens use Walt Whitman's poetry to speak about themselves.

Crandall found her subjects slowly, in the course of two years. Friends and acquaintances gave her recommendations; she approached people sitting on their porches and knocked on strangers' doors. She tried to apply a "diverse notion of what diversity is," she told me, adding, "In journalism, we can overprescribe who people are, in an attempt to get them down on camera." Her project shows, deliberately and sometimes unexpectedly, the varied face of a region that is often thought to be homogenous, and a Whitmanesque alchemy materializes: every subject comes off both as an individual with a clear political identity and as part of an indivisible whole. "Whitman was thinking beyond his time and place, drawing on this empathy that allowed him to approach something far beyond himself," Crandall said. "He allowed for the space that lets us use that material today."

At Medium.com, Sonya Childress argues that the new political climate requires a shift in priorities from "empathy" to "solidarity."

When empathy is the dominant goal, the filmmaker (or impact producer) positions film to "humanize" the subjects by presenting them as worthy of empathy, compassion, understanding  -  even rights. More often than not these people who need humanizing are the marginalized in our country: queer folks, Muslims, African Americans, immigrants, etc. The hope is that audiences will connect emotionally with the woman who crosses a border to provide a better life for her child, or transgender teen who comes out to his family, or formerly incarcerated man who cares for his ailing mother. In essence, we want the audience to witness the film subjects behaving "just as we do", so they are "humanized" before our eyes. But let's be honest here, the "we" that always goes unspoken, is white America. And in order to present these "others" as human we need to present them in ways that are less foreign, less threatening, and frankly, more relatable to white Americans.

The notion that low-income and working-class people, or people with backgrounds different from our own, do not derive meaning from the arts, or do not value free and full expression - this notion is equal parts insulting and ignorant. In fact, the arts and humanities are necessary to address a kind of poverty that goes beyond money - a hunger that lives not in our bodies but in our souls, a uniquely human hunger for dignity and for transcendence. The arts lift us toward this dignity, and open us to this transcendence.

At Sundance Institute, 14 women address the need for more female voices in film.

Earlier this year, Sundance Institute announced its fifth class of Women at Sundance Fellows to support emerging and mid-career directors and producers as they strive to create sustainable careers in a highly competitive environment. To celebrate Women's History Month this March, we went to the creators themselves – including directors, actresses, and producers – to get their thoughts on the need for female voices in film, the boundless nature of gender, and how to support stories both about and by women.

"Visionary fiction" speaks of art that is self-aware, that understands there is no such thing as neutral  - art either advances or regresses our evolution, justice and liberation. We use the term to identify work that centers marginalized communities, understands change as a bottom-up process, challenges single hero narratives and moves beyond the binary of dystopia/utopia. It was important for us to gather these stories from people doing the work, because we believe that all organizing is science fiction, shaping the future to be a just and liberated place.

Also at Immerse, a response from Michele Stephenson says that visionary nonfiction should embrace collective interdependence.

The way in which the practice of process and creativity have been embraced in Detroit with speculative fiction represents an urgent call to action for all storytellers. New media platforms present an opportunity to avoid repeating or maintaining the same oppressive paradigms in the spaces we can control. Front and center are not just the stories we tell, but who tells the stories — and for whom they tell them. The collaborative practice at DNA and the specific voices being engaged are by their very existence acts of a visionary present-day.

At POV's Documentary Blog, Tom Roston speaks to festival directors about who watches documentaries - and who doesn't.

Was the documentary community guilty of focusing on identity politics too much and thereby (in a small way) contributing to a blind spot in not telling the stories of middle-of-the-road, dispossessed white America, which helped Donald Trump’s alt-right base sweep him and us into the mess we’re now in?

Also at POV's Documentary Blog, Dawn Porter responds to Roston by saying she's no longer worried about "alienating" an audience.

I think what we've learned from this election is that if people want to isolate themselves from the world and from facts, they will. The fact that some people choose to deny climate change, racism, homophobia and other social ills is not going to stop me from telling stories to people who are interested in not living in an echo chamber. Does that mean we should stop producing films about climate change? About homophobia? About black people getting killed by the police? I don’t think creativity is a zero-sum game. You can't make a person want to learn. So what is meant by do we need to understand this group better? I think if anything we’ve IGNORED their racist behavior, and allowed it to fester until it exploded like cancer across this country. Are we to also understand when they have small-minded politics? Or racist views? Or just understand that they are suffering? Does one excuse the other?

"I'm sure many of us, just as we have been horrified by the discourse as it plays out in what passes for "news," have been heartened by the growing resistance to that discourse, the movement for Black lives, and the opposition to Islamophobia and other forms of resistance. If past is precedent, the growing movement will lead to an upsurge of interest in our field. The documentary form will attract more and more young people of color and emerging artists who will expand the form and bring a hunger to craft new and vital stories. The question is whether our field will be ready to include them. Every field and institution with power in the US will have to grapple in the coming years—the next decade especially—with whether it will adapt to what we are now calling "the unstoppable future." The willingness of our institutions to bring diverse people and points of view out of the margins will determine whether they continue to be relevant—even whether they continue to exist."