Exit Interview: Ken Jacobson Reflects on His Years at IDA 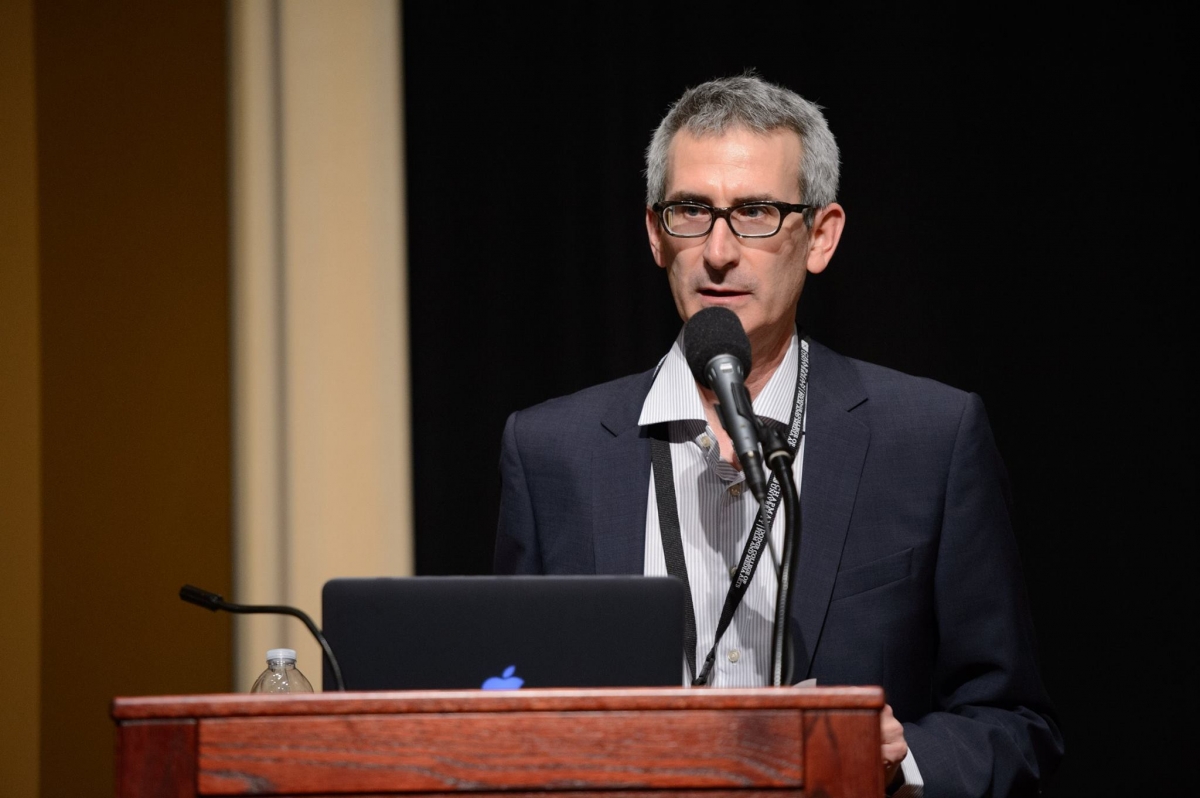 Ken Jacobson recently departed IDA, having served just over three years as its inaugural director of educational programs and strategic partnerships. In that short tenure, he added significant value and visibility to the organization, expanding its programming to include intensive master classes and enhancing the profile of the "Conversations with…" series by securing TCM host Ben Mankiewicz to commandeer the evenings. And then there was Getting Real, the groundbreaking filmmaker-to-filmmaker event--developed and produced by Jacobson, Execeutive Directors Michael Lumpkin and Simon Kilmurry and Director of Filmmaker Services Amy Halpin--that in 2014 firmly established IDA on the national map and in 2016, with its A-list network of partners and advisors that Jacobson helped assemble, gave it global cred.

We spoke to Jacobson by email, just after he wrapped up a whirlwind month of programming docs at the Palm Springs International Film Festival and covering the VR offerings at Sundance for Documentary magazine. Here he reflects on his sojourn at IDA and his stint as a Los Angeleno, and offers some advice to his soon-to-be-named successor.

You came to IDA in 2013 as the organization's first director of educational programs and strategic partnerships. Although IDA had been producing educational programs for several years prior to your coming on board, your arrival marked the beginning of what would evolve into a full-fledged department. What did you feel were the strengths of IDA at the time, and what were some of the challenges that needed to be addressed?

At the time of my arrival in 2013, IDA had an impressive tradition of producing educational programs; what stood out were the "Conversations with" filmmaker events, which had existed in various iterations and at different venues for quite a few years. There was also a monthly panel series that touched on key issues in the doc community. What I felt was missing was a range of programs that could serve the professional development needs of all filmmakers. I also knew that its existing programs could use a fresh pair of eyes to see what we might be able to retool and, hopefully, improve upon in terms of venues, speakers and formats. As a result, one determination I made was that the panel format was, for the most part, an inefficient delivery system for information exchange with filmmakers. I'm fine with panels if the topic is best suited for that, but there was a sense that we were doing panels more out of rote, rather than because they best served the needs of filmmakers. I felt a strong commitment, shared by my IDA colleagues, that serving the needs of filmmakers was always the primary lens through which we should view all of our programs and initiatives.

In terms of new programs, I also felt there was a need for longer form Master Classes so that we could delve deeper into the art and craft of documentary. I knew we could draw upon a deep pool of expertise from veteran filmmakers based in LA and elsewhere who could collaborate with us on the design and execution of such a program.

Looking at the "strategic partnerships" side of your title, what were some of the most valuable alliances that you helped to forge, that you feel have placed IDA in a more prominent place in the documentary community?

I think the full range and clearest expression of those strategic partnerships came to fruition at Getting Real '16, where we partnered with approximately 20 key players in the documentary space, from Sundance Institute Documentary Film Program to Firelight Media, ITVS, CAAM, the Flaherty Seminar, the Center for Investigative Reporting, Field of Vision, European Documentary Network, BritDoc and many others, all of whom contributed to content—and, hopefully, also benefitted from those collaborations. And, of course, our presenting partnership with the Academy of Motion Picture Arts and Sciences was critical to the success of both conferences. I'm also particularly proud of the partnership that we were able to initiate with the Austin Film Society, which has allowed us to team up with a great organization in a city that is a vibrant but somewhat underserved hub of documentary filmmaking.

I would guess that Getting Real '14 and Getting Real '16 were your two monumental achievements. Talk about the differences between the two, in terms of planning, production and execution. How did the first one serve the next one? What were the key successes of GR '14 and where did you see a need for growth and improvement?

The biggest differences between GR 14 and 16 were in three areas: programming partnerships, convenings of filmmakers, and the international focus and representation. In GR 16, we implemented programming partnerships with various doc organizations, which was something that we had discussed for GR 14, but didn't have time to carry out, and which became a huge part of the programming for GR 16; second, we expanded on the idea of GR as a "convening of convenings" by encouraging and facilitating gatherings at GR that were organized by others— for example, the Asian American filmmakers meeting (which was, by the filmmakers' own accounts, truly historic); third, we were able to live up to the "international" in IDA's title by achieving our goal of bringing in a group of international filmmakers and organizations that far exceeded what we were able to do for GR 14.

The most important idea laid down by GR 14 that informed GR 16 and all future conferences, I think, is that this event is "filmmaker-to-filmmaker"; it is led by and for filmmakers. Everything flows from that core concept.

What were your proudest takeaways from GR 16? Where do you see a need for improvement?

My proudest takeaway was just seeing the incredible response by the doc community—the demand for passes was double for GR 16 what it was for GR 14, and the feedback during and after GR 16 was overwhelmingly positive. I'm also particularly proud of the producing/programming team of Katy Chevigny, Chloe Sosa-Sims, Jai Tiggett and Eliane Henri that we brought in; their energy, ideas and ability to deliver top-level content and memorable experiences were absolutely critical to the Conference. Meeting the capacity demands for nearly 700 attendees was a major challenge and, so, finding the venue and staff support necessary to make things run efficiently will be key for GR 18.

Looking ahead to GR 18, what advice would you give to your successor? Talk about the challenge of building on GR 16 and taking it to the next level.

For GR 18, I definitely think laying the groundwork as early as possible is key. One of Simon Kilmurry's first major decisions upon taking the helm at IDA was to commit to GR 16, and that made an enormous positive impact on planning; however, one can always start earlier, and that would be my suggestion. I think a big question mark for next time is whether the Academy will continue to be our presenting partner; with the opening of the Academy's museum getting ever closer, that may be an issue for them. Related to that is whether the Pickford Center should remain as the festival hub. The foundation is there for a great, vital GR 18 that will take on its own character and, no doubt, inspire the doc community just as much, if not more, than GR 16.

Looking back on the other programs you helped to develop—Conversations with…; Master Classes; What's New—what were some of the more memorable events among those programs?

There were a lot of highlights! I've said before that my favorite moments at IDA happened on Saturday mornings in the IDA conference room, when I looked around the room during our Master Classes and witnessed the almost rapturous joy of filmmakers "leaning in" to absorb as much information and inspiration as they could from each other. Those classes have an almost archetypal campfire quality to them in which knowledge and experience is shared among the tribe. I also have some great memories of Conversation events—hanging out backstage with a surprisingly mellow, down-to-earth Werner Herzog; hearing Heidi Ewing and Rachel Grady get fired up during the presidential debates that we piped in to the theater prior to their Conversation; chatting with Henry Rollins and Morgan Neville on the patio at Cinefamily; and just listening, riveted by the stories of the many filmmakers whose work and sacrifice I've so admired over the years.

You were new to Los Angeles when you joined us. Three years later, what have you appreciated most about this city, in terms of its documentary community?

In my opinion, the LA documentary community is hands down, along with New York, the top documentary hub in the US. The thing that strikes me again and again is how collegial and generous LA filmmakers are with each other. They truly want to help each other make great films and continue to get work. I'm sure this is true in other cities as well, but in LA, you can actually see and feel the manifestation of that spirit of generosity. For example, the Documentary Meet Up—the quarterly event organized by Doug Blush, Matt Radecki, Laura Nix and others—is a truly grassroots endeavor that brings filmmakers together in an informal, but highly valuable, way. I don't think there's anything else like it anywhere else. I'd love to see that take root in the Bay Area, for example.

What's next for you?

Right now, I'm in Oakland enjoying the company of my wife and our two cats, and living near my father and sister for the first time in over five years; it's good to be back here, although I do miss LA and IDA. I've recently completed my sixth year overseeing the doc lineup at the Palm Springs Film Festival, where I also program a special annual doc filmmaker retreat at Sunnylands. I'm in the process of looking for opportunities in the documentary community and the festival world. I'm also very keen on virtual and augmented reality as applied to doc filmmaking and have started doing some writing and programming in that space, including a new stint in April as the Minneapolis St. Paul Film Festival's first VR/AR Programmer.

Ken Jacobson can be reached at ken@psfilmfest.org.

Tags:
Getting Real
Inside the IDA