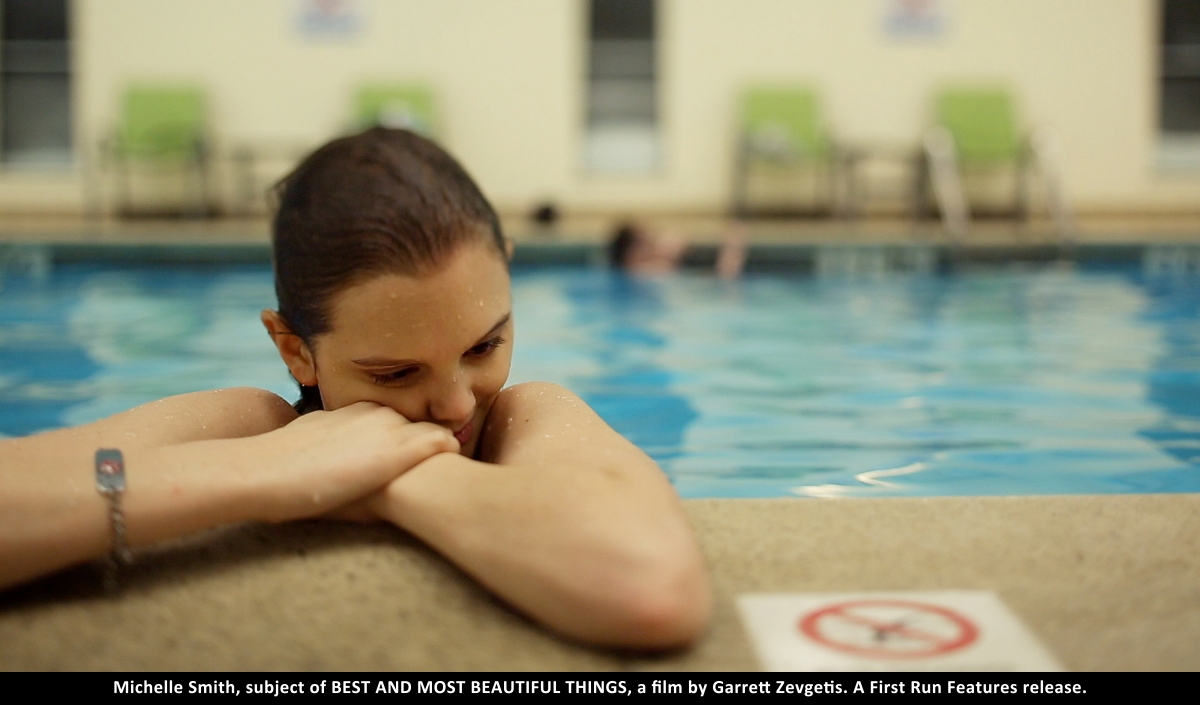 Editor's Note: Some of the greatest documentaries of all time would be inconceivable without their protagonists to drive the stories and keep us viewers enthralled. From the Beales to the Friedmans, from Bob Dylan to Bob Flanagan, these real-life people were transformed, through the dynamic collaborative processes with their respective filmmakers, into indelible and engaging characters of cinema. And it's thanks to the access and intimacy that these protagonists granted to the filmmakers that these films were made in the first place.

So when writer Lauren Wissot proposed a column in which she would interview a documentary subject every other month, we welcomed the idea. So, here is the inaugural Doc Star of the Month (even though it's every other month): Michelle Smith of Best and Most Beautiful Things.

Thus, it was a true honor to have had the opportunity to speak with this thrillingly unconventional, pansexual, sex-positive activist prior to the film's January 2nd debut on PBS' Independent Lens.

Michelle Smith: I haven't heard of that movie, but it sounds like something I'd like to watch! It was my first time really making friends out of high school, and it helped me to realize that I can make friends as an adult, in real life, not just on the Internet. Like I say in the film, I had BDSM in my mind for a long time, but whenever I saw a video or something and thought, "Oh, that would be fun," it would immediately be followed up by, "Why would someone want to do it with me?" So, discovering that people in the kink community are accepting and really did want to play with some blind chick really helped my confidence. Plus, I found out there are a lot of kinky nerds.

Well, it started with the fact that I approached him first. I didn't know he was making a film; I just saw that he was sitting by himself. I always try to make it a point to say hi to people sitting alone because I remember being that person and always wished someone would talk to me. So that's a big part of it. If he had just come up to me and said he was making a movie, I would have been more apprehensive. Also, the movie slowly became about my life. At first, I was just one part of it. And, I made friends with everyone who made it. When they would come over, it just felt like we were all hanging out. They paid me in Dunkin' Donuts.

During the six years it took to make the film, Garrett received incredible access to you and your family. But were there particular times when you resented having the camera in the room?

There were a few moments but it was never because I thought the people making the film were bad, and it was never an extended thing. It was just a couple minutes where I was upset and then when I turned my head, the camera was two inches from my face. It did take a bit more convincing to have the camera two inches from my mom's face. Luckily my family was also really cooperative. I don't think it would have happened if it weren't for the fact that my family was willing to be there.

One of my favorite scenes in the film involved your confronting a counselor who'd had low expectations for you. Brilliantly, you tell her that the individuality of persons with disabilities is not respected in the same way as the individuality of the nondisabled, who are allowed to have quirks without those quirks being deemed "side effects" of a condition. Wasn't her behavior really just another example of power games, though, of the "normal" attempting to dominate and control the "other" through condescension? (Society does this to the elderly - who are too often treated like children - as well.)

Yeah. That's actually one of my favorite scenes in the film, too. I always love to see the reaction of the audiences. In some places people are nearly silent and in other places people boo loudly. But the fact that she did say something so explicitly condescending helped me to reach closure and realize that it's not me, it's her. Because even when I planned ahead - and trust me, even I think it's awesome when I say, "Other people's ignorance is not my burden to bear!" - even with all that, she still shot me down. So that made me realize that no matter what I said, she wouldn't get it. The only thing I worry about is the other students she's working with. I don't want them to get discouraged and think they can't do things.

You're actually the second documentary subject I've interviewed this year who's described herself as pansexual. (Pansexual may soon be the new transgender!) Do you feel that the LGBTQ community is really any more accepting of the differently abled than society at large, though?

In my experience, yes. Do I think that "pansexual is the new transgender" in that it's now the thing that you have to describe to people? Yes! In every other way, it's very different, as I'm sure you know. There are still people in the LGBTQ community that discriminate against people with disabilities. Just because you're gay doesn't mean you can't be a jerk. But I have had fewer problems with people grabbing my arms and forcibly trying to help me at Pride events than in normal everyday life.

Best and Most Beautiful Things is streaming on the Independent Lens website through February 2. The film is also available on DVD through First Run Features.

END_OF_DOCUMENT_TOKEN_TO_BE_REPLACED

A Question of Ethics: The Relationship between Filmmaker and Subject