Docs for Change: ‘Story Movements’ Celebrates the Power of the Form 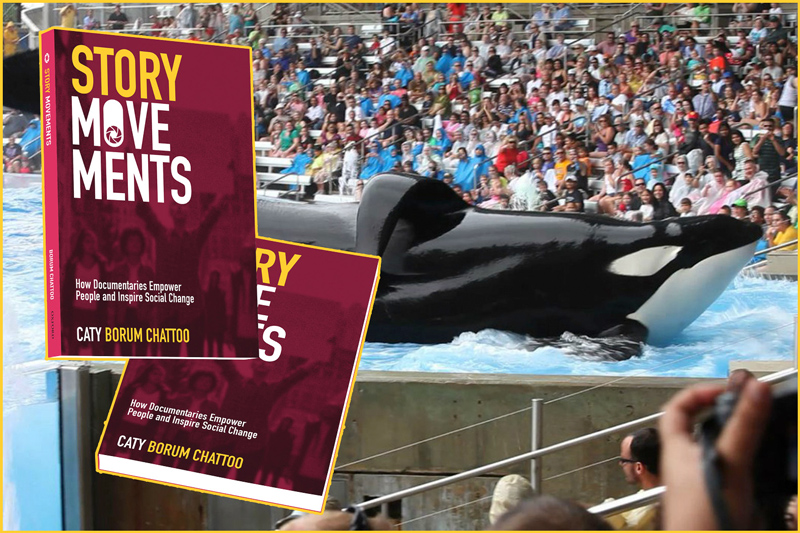 What was the first documentary film you saw that shifted something within you? That helped you see an issue differently? Changed your behavior? Spurred you to take political action?

While it may not have been the first documentary to change me, I have never forgotten how Justin Schein and Laura Gabbert’s No Impact Man, a year-long profile of Colin Beavan trying to eliminate his family’s carbon footprint, permanently transformed my consumption habits.

For author/educator/filmmaker Caty Borum Chattoo, it was Kartemquin’s Hoop Dreams and Stanley Nelson’s The Black Press that opened her eyes to the power of documentaries to catalyze positive social change. Her new book, Story Movements: How Documentaries Empower People and Inspire Social Change, offers a comprehensive look at the various ways docs have contributed to positive social change in the US. More than that, she makes the case that “Documentary is a vital, irreplaceable part of our storytelling culture and democratic discourse” and that “by opening a portal into the depth of human experience, documentary storytelling contributes to strengthen our cultural moral compass.” A lofty notion.

Chattoo interviewed over 50 filmmakers, nonprofit leaders, impact strategists and policy makers, and details substantive case studies of over a dozen social-issue films, from Blackfish to The Invisible War to Southwest of Salem. Because Chattoo sees the current “networked age” as critical to her analysis of documentaries and social change, her case studies focus mainly on films made after the 2010s. And by her own admission, the book takes a mostly US-centric view.  She alludes to a second book on the international phenomenon of documentary social-issue storytelling, and I hope she writes that book. (For a taste of global social-change documentary culture, check out Doc Society [and their fabulous Impact Field Guide and Tool Kit] and Good Pitch.)

Story Movements couldn’t be more timely. In the midst of a global pandemic that is revealing systemic social inequities; when nations around the world face economic crisis; and streets fill with protestors, governments spread misinformation, and social media fuels conspiracy theories and racist tropes—we are deeply in need of powerful, trustworthy, extensively researched, nuanced documentaries aiming to set the record straight, shine a light on misdeeds, offer counter-narratives to official stories, and change conversations, spark action and mobilize movements.

Filmmakers and audiences may know anecdotally that documentary films have helped build social movements and changed behaviors, attitudes and even laws. This book thoroughly lays out the compelling recent history of “how documentaries empower people and inspire social change.” The book will be useful in university settings—film history classes, documentary studies, American Studies, sociology and communications—and will hopefully reassure funders that documentaries are increasingly effective game-changers.

The book will also be an inspiring read for doc filmmakers, enthusiasts and activists. As a longtime documentary filmmaker, who makes what I’ve coined “sideways social-issue films,” I was inspired and re-energized by Chattoo’s book. Even the choir needs preaching to…

The book includes lists of films referenced, people interviewed, and organizations and initiatives active in the “documentary and democracy landscape.” For scholars, researchers and the rest of us who habitually check sources, each chapter is extensively footnoted (40 pages of footnotes!) and a detailed index is helpful for zeroing in quickly on a film, filmmaker or topic.

Documentarian Mark Jonathan Harris has said that structure is the primary aesthetic challenge in documentary filmmaking; Chattoo literally lays out a “roadmap for reading”—a sound structural journey through the book. She starts by deconstructing Grierson’s classic definition of documentary (“the creative treatment of actuality”), and acknowledges the problematic roots of early “social-issue” documentaries—i.e. Flaherty’s manufactured and romanticized portrait in Nanook of the North and Grierson-era simplistic “victim” portrayals of marginalized groups. Chattoo brings this up to date by citing Dinesh D’Sousa’s Death of a Nation—and then dismisses it as propaganda outside the realm of what documentary is commonly understood to be.

Chattoo’s first few chapters lay out the documentary landscape: She presents a thematic cultural history of American documentaries; explores the various functions documentaries play in what she frequently refers to as “the networked age” (as counternarratives, conversation-changers, mobilizers and tools to strengthen civil society); and explores “the ecology of organizations, activists, and collaborators” working together to engage audiences for the purpose of enacting positive social change.

Several chapters follow with detailed case studies of over a dozen American social-issue docs, examining filmmaker and activist strategies, audience engagement and the impact of the various films. Chapters are organized by theme: “Mobilizing for Change”; “Humanizing the Headlines”; “Shaping Laws”; and “Interrogating Hidden Truths.”

The final chapter, “Imagining the Future,” is a sort of “state of the documentary,” examining ongoing challenges in our field such as career sustainability, funding, distribution and representation. Chattoo charts the evolution of #OscarsSoWhite and #DocsSoWhite, and the birth of A-Doc, Brown Girls Doc Mafia, Documentary Producers Alliance, and other collectives formed in response to the marginalization of many communities. She reminds us that the current boon of streamers and other market-driven companies embracing docs in large numbers doesn’t necessarily foster a much-needed diversity of voices and viewpoints. As she quotes media scholar Victor Packard, “The commercial logic driving this system isn’t troubled by democracy.”

Chattoo continually reminds us why documentary matters as an essential component of a healthy participatory democracy.

Story Movements was completed before the global pandemic. It remains to be seen how the documentary ecosphere will be changed and challenged, as philanthropists and foundations shift their giving away from media to address urgent human needs; as film production has ground to a halt; as nonprofit organizations scramble to survive and support their documentary constituencies; and as festivals and theatrical exhibitors try to reinvent themselves to stay afloat.

Nonetheless, Chattoo’s book is a useful and impressively up-to-date pre-COVID look at how US documentaries have addressed the need for social change in myriad ways, almost since the birth of the form.

I finished the book feeling that it’s time to turn our lens on ourselves. As Sundance Film Festival’s Tabitha Jackson points out in Chattoo’s last chapter, as we make our documentaries, we need to consider “not just what they are made about and who’s making them, but literally how they’re made, how the making of work impacts communities, how everything you do is, in some sense, kind of a political act…As a field, we have been able to look out and observe and critique the world and make films about social justice. But now we are asking ourselves more intentionally, ‘Is our practice itself just?’”  Well worth considering.

Armed with the many examples in Chattoo’s book, our task now is to walk our talk as we continue to intrepidly make documentaries that aim to build a more just world.

Lisa Leeman has been making what she calls “sideways social issue documentary films” for the last 30 years, and is a professor at USC’s School of Cinematic Arts. She’s currently finishing Trans*Formed, a 30-year follow-up to her first film, Metamorphosis.

END_OF_DOCUMENT_TOKEN_TO_BE_REPLACED

Anatomy of “The Blackfish Effect”