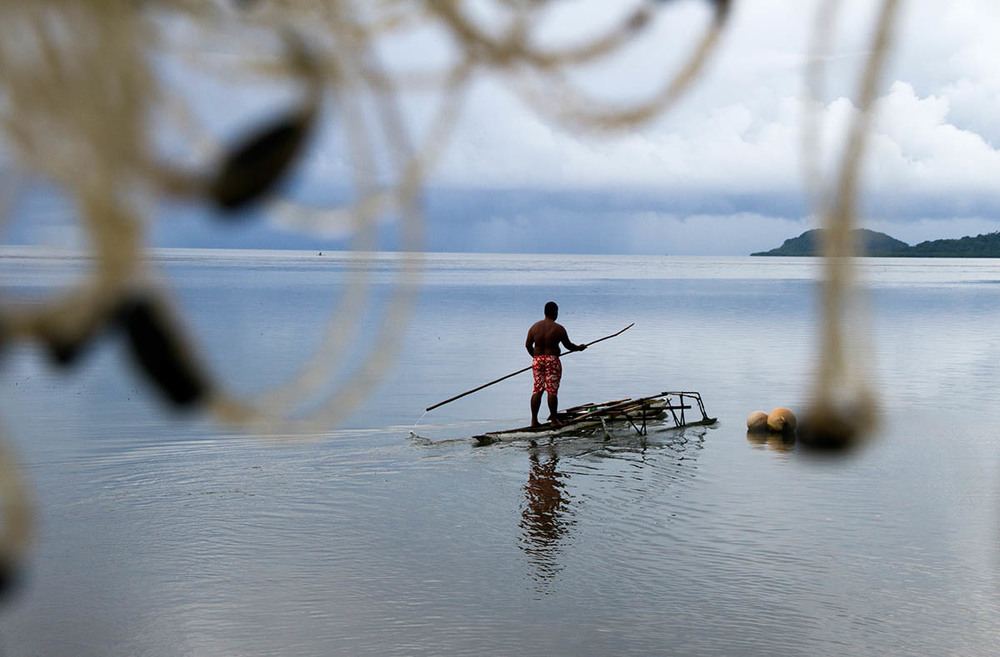 Since IDA’s DocuClub was relaunched in 2016 as a forum for sharing and soliciting feedback about works-in-progress, three DocuClub alums have premiered their works on the festival circuit this past month. In an effort to both monitor and celebrate the evolution of these films to premiere-ready status, we reached out to the filmmakers just prior to their festival premieres.

To launch this series, we contacted Nathan Fitch, producer/director, and Fivel Rothberg, producer, of Island Soldier. They premiered the film at Full Frame Documentary Festival and subsequently screened it at Hot Docs this week.

Synopsis: Island Soldier follows members of the Nena family from one of the most remote islands in the world to the training grounds of Texas and the battlefields in Afghanistan. The death of Sapuro “Sapp” Nena in Afghanistan makes waves through his tiny home island of Kosrae—where nearly everyone is connected to the military, either directly or through family members. In an attempt to heal from his own deep wounds, Sapuro’s best friend in the Army, Mario Robles, heads to Kosrae with his family to meet Sapp’s parents for the first time and pay his respects on Veterans Day. It is an emotional gathering of two families, from opposite sides of the world, brought together by loss, love and honor.

Going into our DocuClub screening, we were very excited to screen Island Soldier for an audience beyond the filmmaking communities who had already provided feedback (Brooklyn Filmmakers Collective, Meerkat Media) to get an outside perspective on the film.

Prior to our screening at DocuClub, we had several small screenings of the rough cut in the Pacific for our funder Humanities Guåhan, in which we engaged with Pacific Islanders around the themes of the film.

One of the central challenges that we faced on Island Soldier was figuring out the narrative structure. Because the film intertwines the stories of multiple characters in different locations, it was extremely helpful to get feedback on points in the film when viewers were confused or where more context would be important.

Having the written feedback forms filled out by audience members was incredibly helpful in allowing us to compile notes of valuable takeaways to our screening. The biggest takeaways had to do with the film's structure, as well as with a few specific scenes.

One audience member voiced an opinion that she thought that we should have intervened in a specific scene in the film, which led to an interesting conversation around the role of the documentarian. Ultimately, the response was helpful, because the reaction proved that the film was evoking a strong emotion from viewers.

Most of the changes that we made back in the edit room had to do with structure, and trying to include additional context around the issues/themes of the film.

What were the key factors that determined that your film was ready for the premiere?

Once we had the cut in a place that we felt was strong enough, we began submitting, although we were still making changes to the edit. Once we got news of the acceptance to Full Frame, we made a timeline to determine if we could complete the film in time for the screening (color/sound).

When you screened your film at Full Frame, what were some of the reactions, questions and observations that you found most surprising and unexpected?

The most surprising and gratifying part of our premiere at Full Frame was when we learned that Micronesian veterans/service men had traveled hundreds of miles and other states in order to attend the screening. Having them there, and their positive response to the film, were very meaningful to us as filmmakers. We also had other members of the armed services in attendance, some of whom had served in the Pacific, and had some great thoughts about the film.

Did you go back to edit the film after your premiere at Full Frame?

What are your expectations going into Hot Docs?

We are thrilled to be having our international premiere at Hot Docs, and are looking forward to screening with a slate of amazing documentaries.

Tom White is editor of Documentary magazine and documentary.org.

END_OF_DOCUMENT_TOKEN_TO_BE_REPLACED

Are You Ready For Some Feedback?

Full Frame Serves up a Feast of Nonfiction