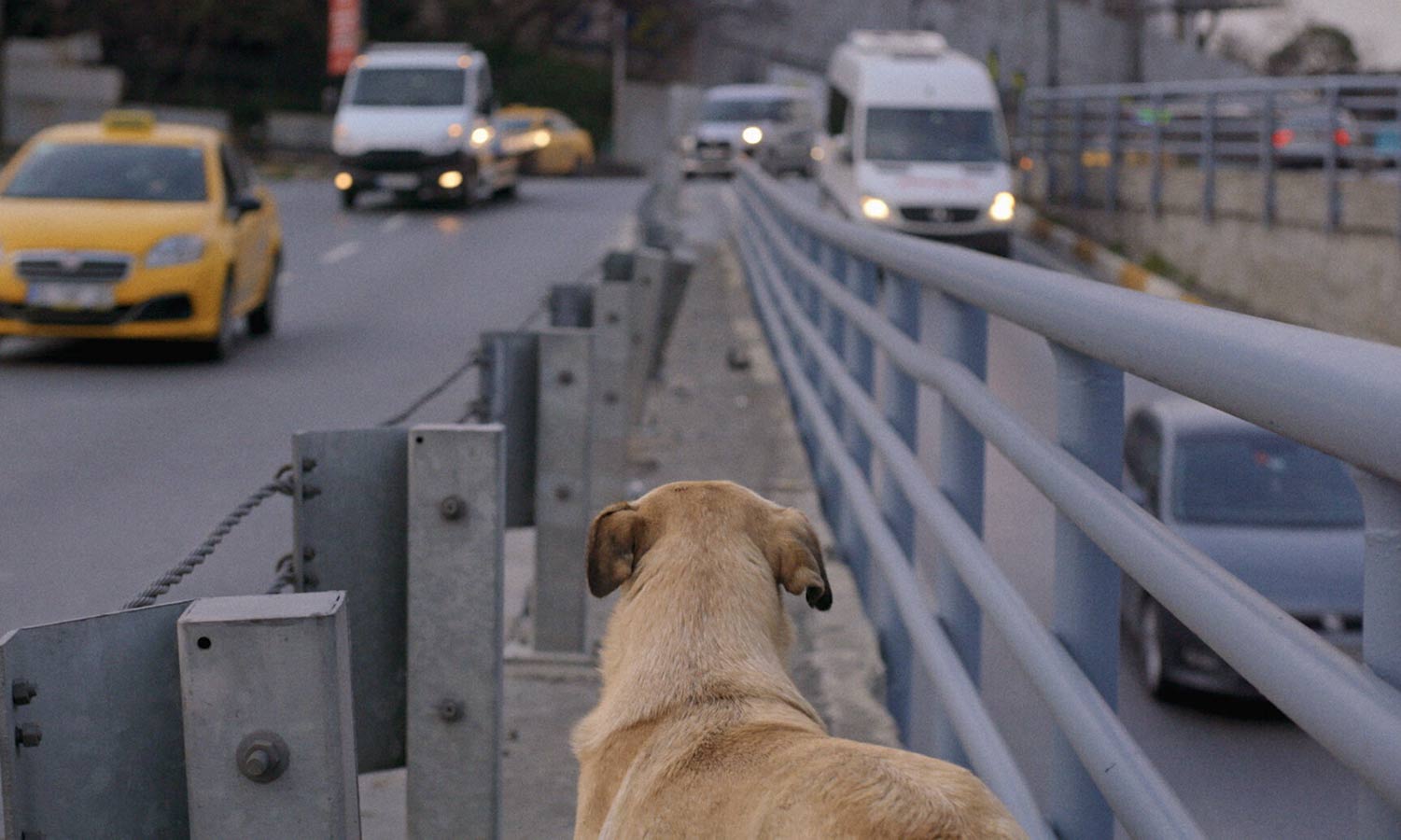 Shooting Scenarios is a new column that takes a single scene and breaks it down cinematographically, looking at the shooting logistics, creative challenges, and camera gear deployed.

Istanbul has a special relationship with their street dogs. It’s not merely tolerance; it’s collective care. Elizabeth Lo discovered this after the death of her childhood pet prompted her to examine how cultures around the world act towards the canine creatures with whom mankind has evolved. Thus was born Stray, a feature documentary that gets inside the life of one dog in particular, Zeytin, and shows how full of agency and rich with encounters her life is.

Several weeks into production, the Hong Kong–born, Los Angeles–based director/cinematographer was returning from dinner and ran into her leading dog. She decided to run back to the hostel, grab her gear, and set out solo, unaccompanied by a producer/soundperson. The result from this hour-long meander was a seven-minute sequence full of canine drama. It captures two explosive dog fights, a protective barking jag, meaty treasures in the trash, treats from a young stranger, and a happy reunion with the homeless Syrian refugees who had befriended Zeytin and her dog pal Nazar.

These moments are captured in long uncut shots, mostly from a dog’s eye perspective. “I wanted the film to literally challenge the ways of seeing,” Lo explains. “When you’re at a dog’s point of view the entire time, that does something to audiences on a subconscious level. You’re being forced to embrace a vision that you’re not used to. One of the goals of the film was to recenter the world away from an anthropocentric mode of seeing. Anthropocentrism and putting humans at the center of all our narratives is so destructive. So the film in its cinematography was trying to move away from that.”

Something wakes Zeytin up. It’s not the footsteps of evening shoppers who bypass her and Nazar sleeping in the middle of Istanbul’s busiest shopping street, but something else. She sits up, starts barking, and walks straight towards the camera with a slight tail wag. The camera backs up, past an overflowing garbage bin. The dogs become distracted by the heavy plastic bags and start ripping them open to forage for food.

In the next shot, a municipal garbage truck arrives. Two huge, meaty bones tumble out of the trash, and Nazar claims them both. When Zeytin approaches, a ferocious fight breaks out. The garbage truck driver, watching in his rear-view mirror, gets out to intervene. Instead of shooing them away, he points Zeytin towards the second bone. When Nazar tries again to horde both, he cuts her off, saying, “Asshole, why won’t you share?” Next, Zeytin is seen gnawing on a bone, the argument settled.

Their adventure picks up on a side street, where a father encourages his young daughter to give Zeytin a treat. When the toddler seems shy about approaching Nazar, he reassures her, “She won’t do anything,” showing a level of trust in large stray dogs that’s characteristic of Istanbul.

As the two dogs wander away, a violin fades up. As the melancholy music plays, Zeytin spots a cat and runs across the street to the garbage bin where it’s scavenging. After the feline leaps to safety, the dogs notice something further down the block and bolt towards it, outpacing the camera and falling out of focus. A person with a blanket draped over his shoulders runs towards the camera, shouting “Salaam.” With this greeting, the music abruptly stops and sound-on-film resumes. It’s one of the young Syrians, whom we’ve met earlier in the film. The refugees greet the dogs with rough pats on their backs, but then, out of the blue, Nazar attacks Zeytin. It’s a blood-curdling fight, but the boys manage to break it up. It’s clear that Zeytin’s paw is hurt, and soon the Syrians are gathered around, offering kisses and asking, “Why did you fight?” The sequence ends with a close-up of Zeytin lying on the street, looking pensive.

Getting a dog’s-eye perspective was the technical challenge, and maintaining it for 12 hours a day was the physical one.

Lo had two modes of shooting, based on the two cameras carried from New York. Thanks to a grant from Arri, she brought an Arri Amira, which she either shoulder-mounted or set on tripod. But for this scene, she deployed a stabilizing rig built around a Canon EOS C300 Mark II. The C300 also came through a grant from Rooftop Film’s Filmmakers Fund.

That grant also enabled her to carry a set of Cooke S4 vintage prime lenses. “They’re ancient lenses from the 1960s or ’70s, but rehoused into modern casings, where the ridges are very clear, so you can pull focus very easily,” which she herself had to do. “Going to Turkey felt a little like time travel, to a space in history where dogs are allowed to live freely among us. So capturing the dogs with these vintage lenses and lending them a romantic feeling with the softness of the lenses was important.” Her workhorses were the 24mm and 35mm, and this scene was shot entirely on a 24mm. Since she was alone this particular night, she also brought her Schoeps shotgun mic— “the best investment I’ve made.”

For the rig, she got what was available in Istanbul: an EasyRig Vario 5, the company’s most popular model. That was coupled with an older stabilizer, a DJI Ronin gimbal. But even with the camera underslung, Lo still had to stoop down to be on the dogs’ level. With takes typically running 10 to 12 minutes, that was physically taxing, to say the least. “I couldn’t technically figure out a better system with so few people,” admits Lo, who simply powered through. “I just put my body to the test. And my will power.” As with any athlete in training, the pain in her back and legs lessened as the weeks rolled by.

The last piece of essential gear was for the dogs. Each night when they parted, Lo would put a GPS tracking collar on Zeytin, donated by Tractive GPS. That allowed Lo and her producers to locate the dog’s whereabouts on a smartphone the following day.

It was only when Lo was editing that she realized what Zeytin was barking at. Standing behind her was a man peppering her with questions, whom Lo did her best to ignore. Zeytin must have picked up on Lo’s annoyance. “She was trying to ward him off,” Lo surmises. Despite the fact that Zeytin usually seemed indifferent to her presence, this was one of many subtle acknowledgements of Lo as the dog’s part-time traveling companion.

For Lo, the film built on “the tiny moments of drama that happen in a stray dog’s life.” The fight over bones was a big one. The fact that the garbage collector took it upon himself to restore harmony between Zeytin and Nazar was surprising to Lo, and notable: “To me, that speaks to this engagement at every level of society with these dogs, who they see as part of their social fabric.”

Lo used sound design to heighten the fight, thinning out ambient noise as the dogs do battle. “Ernst Karel, our sound designer, lifted all the frequencies to mimic how dogs hear a higher range of frequencies than we do. So you’d hear the clinking of metal meeting the ground and wouldn’t hear the humdrum of people passing by. We felt in such a tense moment, the dogs would only be concentrated on each other.”

Regarding the use of music in this scene, Lo says, “It was a dilemma whether to include music in this film at all,” given that music has little to do with dogs’ experiences. In the end, she decided to go with her personal preference and worked with composer Ali Helnwein on a score. “It’s a passage where nothing’s really happening, and I just liked the way it makes a mundane scene feel almost melodramatic. There’s not that many moments in the film that you’d consider a ‘plot.’ These tiny moments of a dog wandering through the city are heightened by music.”

The Syrians served as a narrative anchor. “They’re familiar faces in this dog’s life,” says Lo. That shot of the dogs running towards them and out of focal range is Lo’s favorite in the film: “Me failing to catch up with the dogs and unable to control the focus,” she says with a laugh. “There’s something poetic about that shot. And I love that it preserves the continuity, the integrity of the sequence of events. You know they left that little girl and her father in that same sequence; they chase the cat, then they meet the young men. I wanted audiences to experience what I experienced in the field by not cutting.”

As to why the dogs fight a second time, Lo can only speculate. Some viewers think it’s jealousy over who got more attention from the boys. But Lo has a different theory: “My suspicion is that the memories and grudges of dogs are long. And that Nazar held a grudge against Zeytin for having to share her bones” after the earlier fight. “I don’t think any of us can ever know. That’s part of what I love about that scene: the inscrutability of the dog’s mind. Even as they’re so familiar to us, at the end of the day they are a different species, and it’s impossible to fully know.”

Stray premieres online on March 5 through Magnolia Pictures. For more on the film, see “The Feedback: Elizabeth Lo’s Stray.”

END_OF_DOCUMENT_TOKEN_TO_BE_REPLACED

Building a Documentary Culture in Turkey