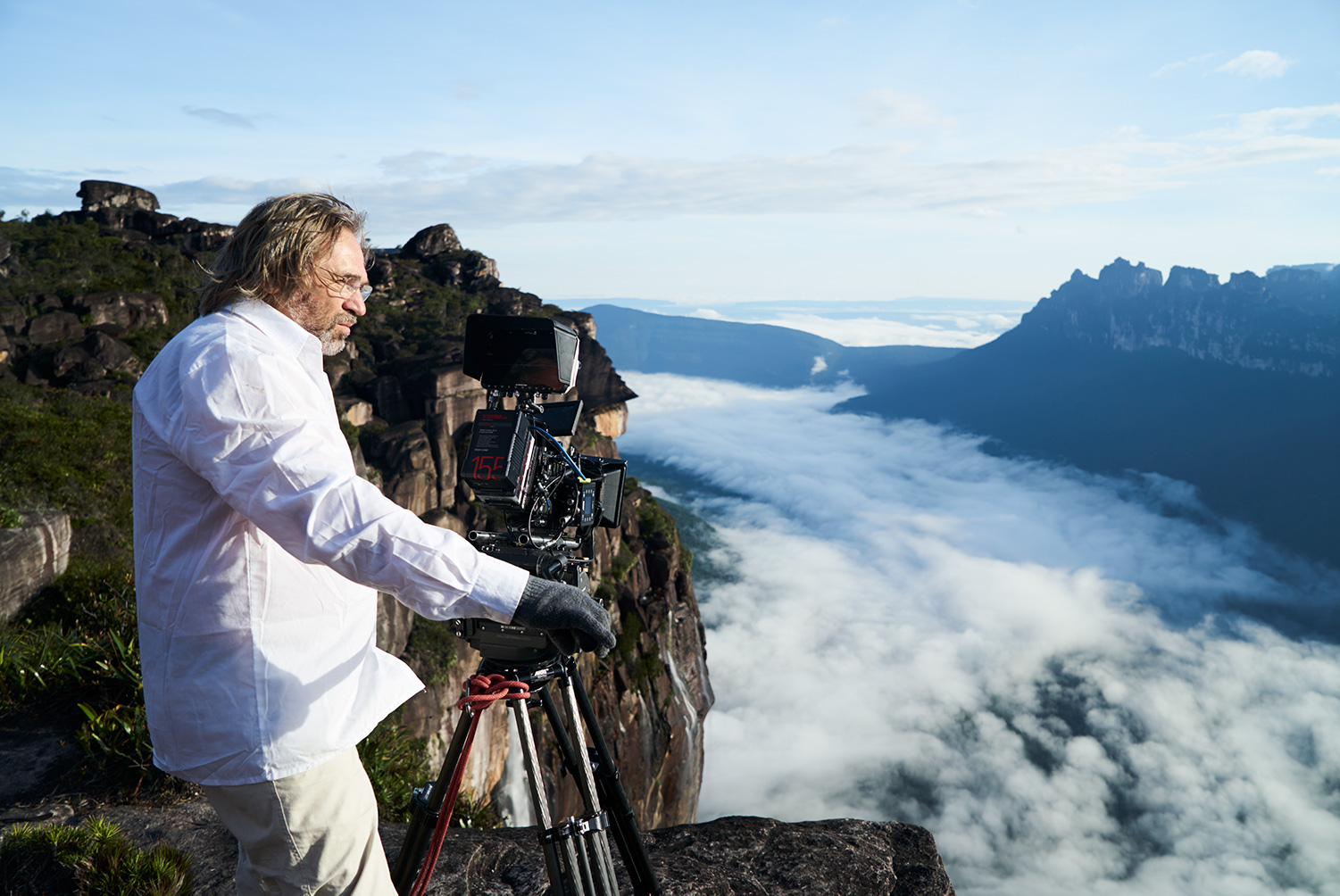 “You [Americans] did it for me. You wrote Moby Dick, The Old Man and the Sea. You inspired me with this amazing literature….It was just a question of saying the same thing, but with pictures, not with words.”

Master Russian filmmaker Viktor Kossakovsky does not want to tell you anything—he wants to show you everything. Aquarela is his 90-minute visual symphony to water and our planet’s precarious ecology. Filmed in 96 frames per second and projected in theaters at a stunning 46 fps (with no fewer than 118 channels of audio), the result is a triumph of European-style, non-narrative, nonfiction filmmaking that takes on one of the defining existential issues of our time.

Documentary spoke with Kossakovsky by phone as he was readying Aquarela for its August 16th theatrical release via Sony Pictures Classics. This interview has been edited for length and clarity.

DOCUMENTARY: US audiences are very familiar and comfortable with social impact documentaries that explain a contemporary problem and call on us to take action. There’s no explaining in Aquarela—it’s a non-narrative, sensory-driven experience—but there’s an implicit commentary on climate change. How do you approach the question of social impact?

This is for me always a surprise when I watch American documentaries. I am a member of the Academy and I watch 300 films a year. Most of them are talking heads, talking about an issue. It means American documentary is a kind of department of the United Nations, or Greenpeace Movement, or environmental or human rights movement. But cinema is a language to show people something they have never seen before, not to tell them. If you want to tell them, go to TV, go to newspaper, make a book, make a political speech.

D: In Aquarela, water is the main character. We go on a journey that follows its transformation from solid, to liquid, to mist. How did you develop this character in the field and in the editing room?

VK: We knew in the beginning that the most interesting thing is this transformation. We knew it because the scientists still don’t know the process behind it. They still don’t know why the coldest water becomes warmer faster than normal water. Or why the warmest water freezes faster than normal water. They still don’t know so many things. What we only know now is that water is a molecule that never dies. An iceberg might be a hundred thousand years old or a million years old, and still you can drink it. This is amazing.

This is what we wanted to show. But, of course, when you make a film and you want to raise money, you have to tell a story on paper. Honestly, in Europe I was not able to raise money.  Only Participant Media understood. If Participant had not come onboard, this film would never have happened.

The idea when we started was a little bit different. But when I came to the Baikal [an ancient, massive lake in Siberia], in the first shooting day I filmed this tragic moment [a man drowning]. From that moment I realized, Wow, it’s much more serious than I thought. So I threw out the script and I said, OK, I’m going to follow water wherever it goes. After this accident, the next thing must be something more crazy, more serious. What could it be? And I came to Greenland, where I managed to film below an iceberg.

I realized that the iceberg was becoming a kind of character, and we started following the iceberg to the ocean. Then we said, OK, if we’re on the ocean, we have to go into a storm. And when we came to the storm, we were not able to go out and we were three weeks in the storm. We wanted to go from Portugal to Greenland, but the storm brought us to Canada. And then from Canada we came to Greenland. And then, of course, waves hit Miami and we were just kind of following this.

So in the editing it was not a big deal. I was just following this shooting process. There were only two problems: Number one, if I show you a wave 10 meters high, the next one has to be 15 meters high. If the next one will be only five meters you will say, Ha-ha, I have already seen a bigger one.

But the biggest problem in editing was, if you look at the most popular films in the US box office right now, the average length of a shot is 1.2 seconds. It’s cut, cut, cut, cut, cut. It means the director tells you what to think in imagery. After this shot, another shot, then another shot. But you cannot do this with water. You cannot watch one second and show that it was water. You need time to see water, so this was a problem for me.

Then I understand that my best idea was to make a film without music because the sound is so rich, and we made it 118 channels. It was like a symphony of sound.

But I knew that, for example, we have a shot of an iceberg churning in the sea. It churns and then it will be 20 seconds of pausing [as the iceberg disappears underwater before reappearing]. After 20 seconds the iceberg will appear again, and again churn, and then again 30 seconds of pausing and then again it will appear. If I cut it, it will be not the same story, right?  The impressive thing is when you see the same iceberg appear and disappear like an animal, like a creature.

I knew that people cannot wait through 20 seconds of pausing. So that’s why I used music and I said to the composer, “Make me a crescendo so that people will know something is going to happen. Because of the music, people will wait.” So that’s how music was used, more or less.

D: You filmed Aquarela in 96 frames per second. Most theaters can’t project at that speed.  Why did you feel this was important?

You don’t see rain in 24 frames per second. Rain looks like white stripes. If you see my film in real 96 projection, every drop will be individual. So now I’m just begging big filmmakers, “Let’s change; you will see much more when you film 96.” I checked everything: I checked 72, 96, 120, 48, 60. The best result, the most emotional, least digital and still cinematic is 96.

It’s really an amazing result; I would say it’s 3D without glasses. We will change the industry if big guys follow me. And if big guys follow me, of course, you cannot just film talking heads with 96. It doesn’t make any sense. You need to have an aesthetic idea behind it. That’s why I have a lot of fast movement. I have very close textures. I have a lot of things that you see differently in 96.

D: You sound optimistic about the future of cinema. Are you confident that cinema will survive climate change?

VK:  I would say I am the most pessimistic optimist, and I am the most optimistic pessimist.  This is my position. For example, in the US you guys eat on average 220 pounds of meat a year, each of you. You are almost 400 million people. It means you kill 200 million big animals a year. So we can disturb the planet, or we can save the planet. We can destroy cinema, or we can embrace cinema. It depends how we look at this.

If we respect water, if we first understand it…Why don’t we still understand a drop of water? Can you imagine the power of water? We don’t understand, but we behave as if everything is for us.

The American president, when he makes a speech, he puts his hand on the Bible. Even in the US, there are a lot of Muslims, a lot of Jews, a lot of Buddhists—but he puts his hand on the Bible. In the first page of the Bible, it is written that on the first day God made light and dark.  On the second day, water and earth. On the third day, plants. On the fourth day, animals. And the fifth day, mankind to rule all of this—and we believe in this. We believe that everything is for us and everything came like this. But who are we, compared to this unbelievable world? Why are we destroying everything, killing everything, destroying forests, changing the direction of rivers?

If you go to the Indian Ocean, you will see islands bigger than almost the size of Australia—plastic islands. Can you imagine what we are doing? It’s absurd. But, look, I am a filmmaker. A filmmaker is supposed to talk with images, not with speech.

Peter Kurie is a cultural anthropologist and creative producer based in Los Angeles. He can be reached at www.peterkurie.com.