The Full Frame Documentary Film Festival Asks, Why Are “#DocsSoWhite?” 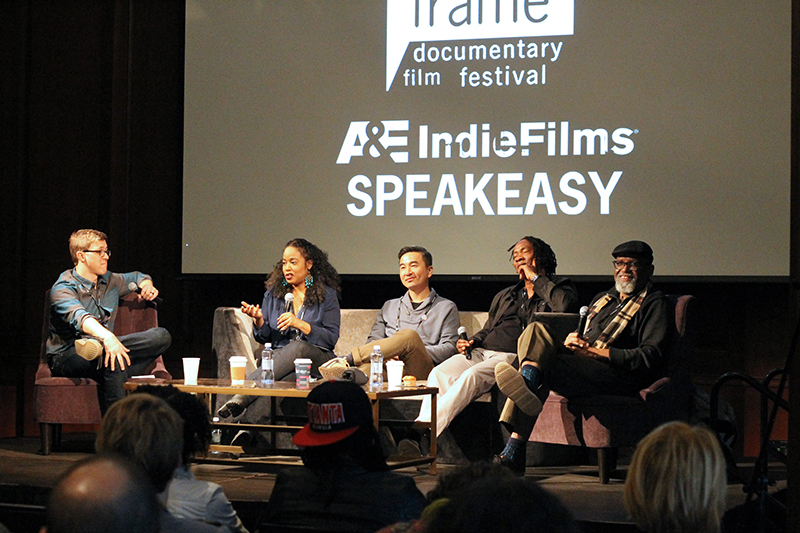 Now nearly two decades old, the Full Frame Documentary Film Festival is perhaps the closest thing America has to a European doc fest in terms of engagement, both from its prestigious attending filmmakers and its rabid audiences. And for the past six years this finely tuned fest has been hosting its laidback A&E IndieFilms Speakeasy conversations. Free and open to the public, the most recent series of panels was held in the 21c Museum Hotel (which, intertwined with a contemporary art gallery, is definitely the most unique hotel this traveling journalist has ever stayed at), and boasted a wide-ranging lineup of both participants and topics.

While attendees could sample everything from "The Glass Ceiling" (female documentarians discussing gender bias in the industry), to "Slippery Truths" (Robert Greene and Penny Lane holding a lively chat, complete with afternoon cocktails, on mixing "art and artifice" in their work), for me the most thought-provoking session was a conversation playfully titled "#DocsSoWhite?." By the time I arrived at 9:20 a.m.—five minutes late on a Saturday morning!—the conversation had already started, and the house was packed. Moderated by Ian Robertson Kibbe (producer of Raising Bertie, and the only Caucasian face onstage), "#DocsSoWhite?" featured S. Leo Chiang (Out Run), Sabrina Schmidt Gordon (Hip-Hop: Beyond Beats and Rhymes), Oscar winner Roger Ross Williams (Life, Animated), and elder statesman Sam Pollard, who brought his latest, Two Trains Runnin', to the fest.

As Kibbe began by running down some damning statistics, including the fact that there are twice as many women in documentary filmmaking as in narrative, I couldn't help but be aware of the makeup of the highly enthusiastic, but overwhelmingly white, audience. Chiang saw this as well, noting that as an Asian-American gay man he instinctively picks out other Asian (there were two) and gay ("several") faces as soon as he enters a room. Pollard added to the point, rolling his eyes in exasperation at the notion of whites that claim to be "color blind." Williams nodded knowingly.

The elephant in the room thus diffused, Schmidt Gordon brought up the importance of the question "Who is behind the lens?" and the problem of financing. For too often, even the most diversity-friendly funder's focus is on subject—i.e., telling black stories—yet not on recruiting black filmmakers to tell those stories. Chiang nodded, and wryly wondered why it's Ken Burns who has an upcoming doc tackling the Chinese Exclusionary Act. The panel agreed that it's crucial just to ask these questions, regardless of who ultimately ends up being the best choice to helm a film.

When Kibbe brought up the fact that the audiences at Full Frame are mostly white, Pollard countered that the location of a festival and what type of outreach is done are primary factors in determining the makeup of an audience. He cited the example of Philadelphia's BlackStar Film Festival as a sea of color. And when Kibbe smartly asked, "What are our responsibilities [as white filmmakers tackling people of color as a subject]?", not one of the panelists took a reactionary stance. They pretty much concluded that a white director might ultimately end up being the right choice. That we're even asking the question in the first place is what matters most.

Pollard went on to blame the funders and the studios for moviemaking's general lack of diversity—adding that the whole Academy Awards controversy was aimed at the wrong target, and not focused on the actual problem. Chiang mentioned something from an article he'd recently read. The reason white guys with one indie film under their belts get tapped to direct superhero flicks, he explained, boils down to the powers-that-be saying, "That guy reminds me of me." Older white executives are more apt to take chances on younger versions of themselves. It's that simple. "Asian-Americans don't have that," he sighed.

"Do you understand your own biases?" is the question Pollard concluded with, for that's the one thing all filmmakers of every color must ask.

Lauren Wissot is a film critic and journalist, filmmaker and programmer, and a contributing editor at Filmmaker magazine. She currently serves as director of programming at the Hot Springs Documentary Film Festival, and programming consultant for the Santa Fe Independent Film Festival.