'The People's Moon': A Collective Memory in Mosaic and VR 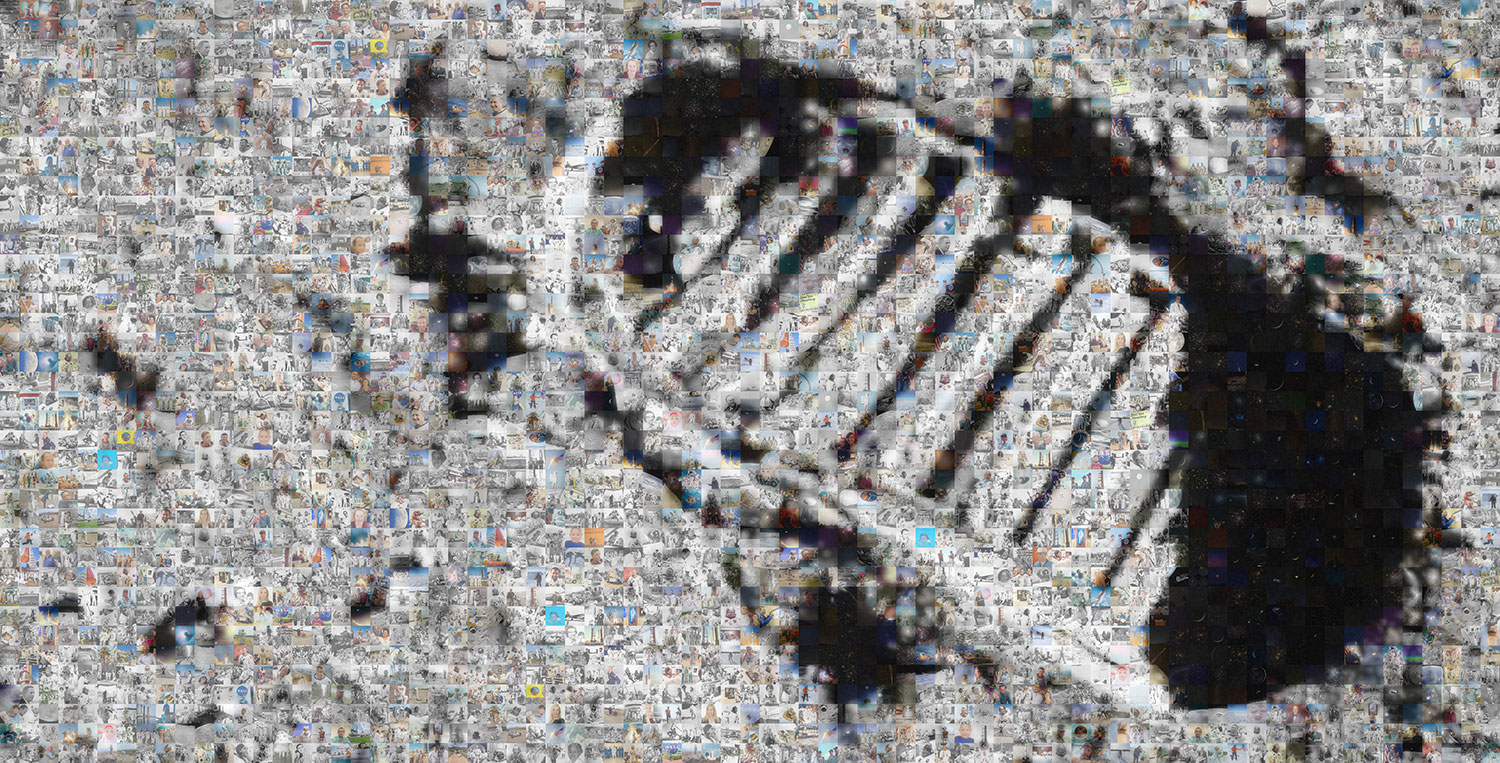 On July 20, 2019 at 2:56 p.m. UTC, it will be 50 years to the minute from when a human being stepped onto the moon for the first time. NASA’s successful Apollo 11 mission will have—at a time of uncertainty the world over—brought an entire planet’s population together, even if just for a moment.

Over half a century later, the world might still be as uncertain, especially when the advance of climate change is brought into the fold, and peoples’ collective consciousness is decidedly fractured. But there is a group of three women—each with distinctive talents—who have had one goal of bringing us back together for another moment.

The People’s Moon was founded by Christina Korp, CMO & COO of the Aldrin Family Foundation. She partnered with virtual reality director and cinematographer Jannicke Mikkelsen, FNF, Technical Director of Interactive Activations for The People’s Moon, and photo mosaic artist Helen Marshall, whose most recognizable work is the mosaic of The Queen at London Gatwick Airport.

The mission: unite the world in celebration of Apollo’s 50th anniversary.

Over the last two years, the group has been collecting hundreds of personal reflections from around the world and all walks of life in the form of photos and written and video messages of how space exploration inspired them to work towards and achieve their own dreams. All messages have been gathered to form a time capsule in the shape of a giant photo mosaic that will be unveiled in New York City’s Times Square and London’s Piccadilly Circus on July 20, and will become a permanent exhibit at NASA Kennedy Space Center and NASA Johnson Space Center.

Korp began working with the Aldrin Family Foundation nearly 12 years ago, running the nonprofit organization, handling Aldrin’s media and PR and speaking engagements. Throughout all those years with Aldrin, Korp often heard stories from people wanting to share their memories from the moon landing. On the 45th anniversary of Apollo 11, she called on the public asking them to share such stories and was able to get celebrities to send her videos, too. The foundation produced a video on YouTube and there was some national press, but Korp didn’t quite get the traction she’d hoped for.

“Five years ago,” Korp says, “people were much less comfortable with their devices. Now, everybody knows how to post a selfie. I knew that I always wanted to do another public engagement project for the 50th anniversary, but I kept thinking, ‘What am I going to do with this content?’ Other than just having it live online, I wanted something more to come out of it. And then, one day, I saw the photo mosaics at Gatwick.”

Something clicked. Korp felt Marshall’s work was the perfect way to display people coming together. She decided to generate a call to action again and have real people—the people who were impacted or the unsung heroes, the people you don’t know about, the people other than the astronauts and NASA—commemorated inside this mosaic.

“There will be tons of Apollo 11-focused events,” says Korp, “and they will all give glory to the astronauts and to NASA, who of course deserve all of it. But what has really stuck, after all these years, is how this was something that united and changed the world and its people. I wanted to do something to honor those people, the ones who stayed up all night and watched it, or the ones who were kids and it made them decide to do something with their lives.”

Korp met Mikkelson two years ago at the science communication and art festival, STARMUS, for which Mikkelson was organizing the VR components alongside other major participants like Stephen Hawking, Brian May and Alexei Leonov. Aldrin was scheduled to speak at the event but couldn’t make it and Korp gave a keynote in his place. Korp and Mikkelson bonded immediately. After collaborating on some projects together over the next few months, they decided they wanted to create something groundbreaking for the upcoming Apollo 11 anniversary.

Marshall came on board not long after meeting Mikkelsen and Korp at the Kennedy Space Center Gala event last year. “We’ve been on a really interesting journey together,” Marshall says. “Certainly, for me, coming to a subject that I knew nothing about and to be immersed in that community of very interesting and peculiar people, the space geeks [laughs]. We all came together and decided we wanted to deliver an artistic experiential project that unites everybody’s talents and experiences around human beings achieving their dreams—their very own giant leap, so to speak.”

Though the permanent exhibit of The People’s Moon at Kennedy Space Center has been funded, Korp, Marshall and Mikkelson have been working on this pro bono since the beginning. With the milestone of a 50th anniversary, many have asked for sponsorship, operation funds, etc. for their own Apollo 11 commemorations and events. “Every aerospace company has been drained of their marketing budgets,” says Korp. “It’s tough to get the mainstream world to see the value or why this would matter to them.”

Each time one of them spoke about The People’s Moon project, it was met with enthusiasm, but trying to get dollars committed proved difficult. Getting people on board, however, was not; many wanted to help, many wanted to be involved. Mikkelsen alone did much to rally the visuals and technology needed to create the Lunar Window™, an interactive installation which she designed specifically for The People’s Moon. She even got John Knoll, a multi Oscar-winning VFX artist and the inventor of Adobe Photoshop, to help; he said that the moon landing in part inspired his life in filmmaking, and he handed over content made in his spare time of technically accurate renderings of the lunar orbit.

For Marshall, getting seemingly impossible funds for art is familiar territory. In her 25-year career she’s often had to work under conditions where financial support was slim to none. “We are delivering it no matter what,” she insists. “We’re going to take over Times Square. To capture people’s imaginations and gather all their photos and dreams, you don’t actually need lots of money; in fact, there can be issue when [bringing on brand dollars] because they often want their logo all over the artwork. As an artist, I like to work with really challenging financial conditions because, in a way, it gives you more freedom.”

Korp has, over the years with Aldrin, heard so many stories about moon-landing memories. And the one that was the catalyst for her to pursue The People’s Moon project was from an Armenian woman who grew up in a Turkish village. There were no televisions, but her father had a radio. The village knew about the moon landing because of the newspapers, and so the day before it happened, everyone in about a 100-mile radius, from other small villages, gathered in her village to listen to this one radio. Transfixed on every word, when they heard that Armstrong had stepped on the moon, they all hugged and cheered, cried in happiness as if it were they themselves who had they landed on the moon.

“She was proud of what humans had done,” says Korp. “She made the decision that day that if they could go to the moon, then this girl from a village with no running water and no electricity could do something with her life. She went on to get her PhD in quantum physics and runs a very successful company in the US now.”

This story, and hundreds of others like it, is a part of Marshall’s photo mosaic in Times Square (and on a digital screen in Piccadilly Circus) on January 20—a printed mosaic of over 3,000 images that will take up most of the ground space between 43rd and 44th that people can walk on and look around to find themselves, friends, strangers and celebrities; there will also be AR patches and a giant moon map and Mars map. And it is stories of connectedness that continued to help the trio get there in the months leading up to July 20. For example, Clear Channel (which owns the majority of the screens in Times Square) came on board to donate screen time early on because someone who worked on that account is married to the step-daughter of an Apollo astronaut. Another example was getting approved with the Times Square Alliance—a notoriously tricky move. But Korp had posted a picture on LinkedIn of her new orange NASA shoes and a connection noticed and commented. Korp realized he worked with Times Square Activations, so they were able to meet and he helped her get approved by the Alliance.

“I think what the moon landing does for us is it reminds everybody that we’re on the same planet together,” Korp says. “Regardless of age, gender, color, location, economic status, we all share that same moon.”