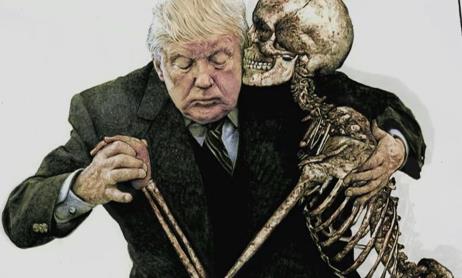 Merely a week after 9/11, San Franciscans Jay Rosenblatt and Caveh Zahedi teamed up to address the national crisis, putting out a call to 150 of their fellow filmmakers to create short films or videos as a response to the mainstream media coverage. The result, Underground Zero, a feature-length omnibus consisting of 11 short works, went on to play on both HBO and the Sundance Channel (and with the participating filmmakers receiving an honorarium, along with $10K of the proceeds going to charity).

Now, over a decade and a half later, a new national crisis has emerged in the form of "a real threat to our democracy, to freedom of speech, and to civil rights," as Rosenblatt and collaborator Ellen Bruno put it in their recent call to (filmmaking) action. Reaching out to over 200 media-makers, the duo selected 13 shorts from more than 50 submissions to create Filmmakers Unite, a project that "documents diverse thoughts and feelings about the current state of our union," as they explained in their description of the project. And "diverse" is certainly the key word here. In addition to Rosenblatt's own Scared Very Scared, Filmmakers Unite's standouts include a mesmerizing short (State of the Union) from one of my favorite documentarians, Alan Berliner, and an intoxicating experimental collage (Who Matters?) by Shy Hamilton, a distinct voice whose work I'd not been aware of before.

I actually caught Filmmakers Unite in advance of this year's (60th anniversary!) edition of DOK Leipzig, where the film was making its debut. "We cast a very wide net of filmmakers we know and filmmakers we admire, with the intention of having the program reflect the diversity of this country," Rosenblatt and Bruno explained when I spoke with them via email as they busily finalized plans for the overseas premiere.

So how did such a thoroughly American project end up at a doc fest in the former East Germany in the first place? "DOK Leipzig was doing a major retrospective of my work," Rosenblatt clarified. "They had seen my film Scared Very Scared and wanted to know whether they could include it. I told them that it was part of a collective project that Ellen Bruno and I were producing—and they said that actually they wanted to do a program related to Trump. So we sent them Filmmakers Unite and they decided to screen it."

As they readied for Europe, I asked the pair about what must have been a tricky editing process, with such a wide range (narrative, documentary and experimental) of cinematic collaborators. "We wanted there to be a flow to the entire program," the filmmakers emphasized. "We were mindful of the chronology of events and the tonality of each piece as it related to the next. We wanted to assemble a program that expressed the growing anger and frustration many of us are experiencing, as well as ending with some sense of hope, faith and decency." In other words, FU, as furious and playful as its abbreviated title, is ultimately a noble endeavor for our nervous interconnected world.

END_OF_DOCUMENT_TOKEN_TO_BE_REPLACED

The Tyranny of Memory: 'The Films of Jay Rosenblatt, Volume I'

Fables of Reconstruction: 'The Films of Jay Rosenblatt Volume 2'