Post-Inauguration Realscreen Summit Highlights Stories from Between the Coasts 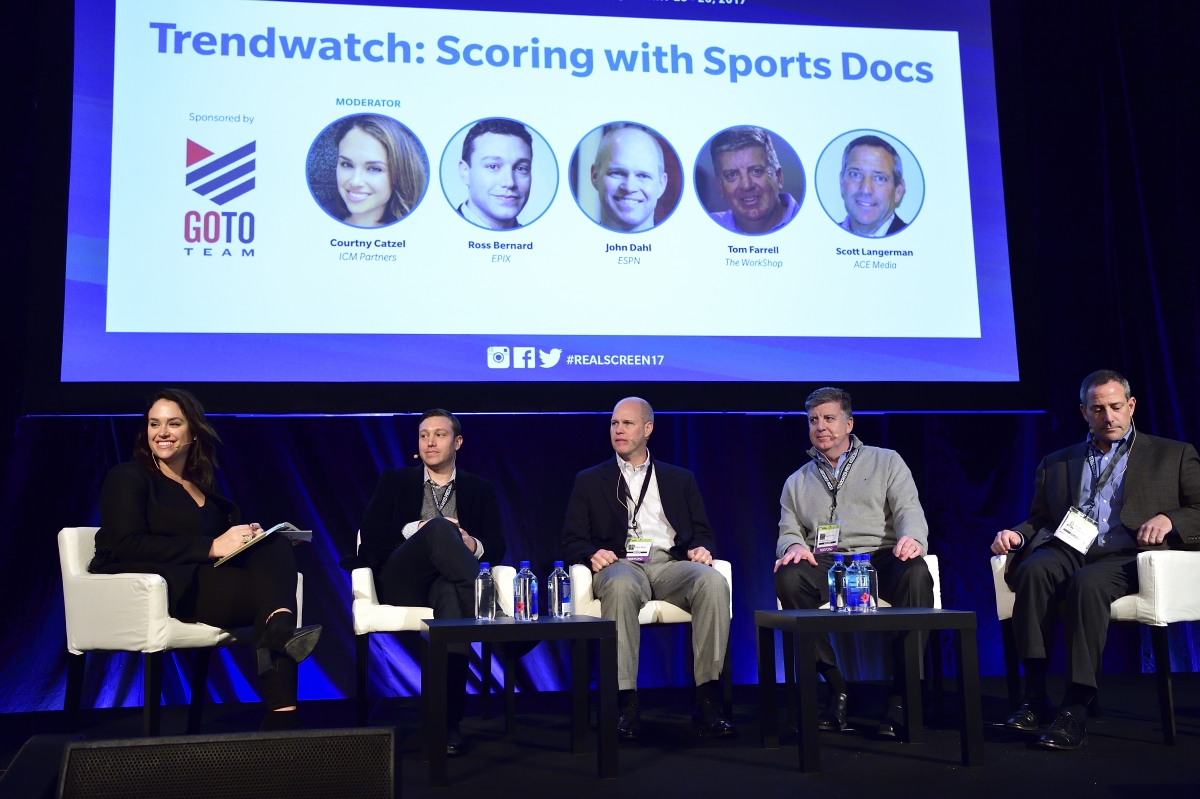 With the US Presidential Inauguration only a few days earlier, this year's Realscreen Summit was bound to hit on some related topics. After all, as one participant said, we helped create the reality star who became president. One panel in particular, "America: Getting the Whole Picture," was based on the idea that perhaps the stories between the coasts were being lost, or not explored. And is there a broader audience out there for producers to tap into? Are channels concerned about missing viewers, much like polls miscalculated voters?

Participants in the session were from companies all over the country, such as Minnesota, Missouri, Colorado and Tennessee. Patrick Jager of CORE Innovation Group explained, "Some networks only want to see people like us. Others want to see people not like them." Jager warned that to attract new viewers, you can't just duplicate existing programs. "That's a problem. Then we depict the same type of person and what you get then are crazy personifications like the Honey Boo Boo's of the world." One of the shows he helped develop, Fixer Upper, is based in Waco, Texas.

Jeff Keane of Coolfire Studios' philosophy was "tell great stories with great characters in the Midwest." "Characters matter," added Jane Durkee of Tremendous! Entertainment. But the bottom line is, even the best characters might not sell. Moderator David Eilenberg of ITV offered, "Advertisers say they are not interested in talent from flyover country."

At times the panel seemed like it was more about bashing Los Angeles and New York, and conversely, how wonderful it was to live in cheaper nicer markets like Eden Prairie, St. Louis, Knoxville and Denver. The bottom line for all the panelists, though, was clear: Figure out your brand and stick to it, no matter where you are located.

That session was just one of the many during the 19th annual Realscreen Summit late last month at the Marriott Marquis in Washington, DC. Taking place at the same time as the Sundance Film Festival, Realscreen was a little smaller this year - just under 2,000 people participated. Twenty-seven countries and more than 300 network buyers were represented. Carlo's Bakery of Cake Boss fame even gave out cupcakes, while WE hosted a much-needed candy bar. There were new faces, too. The Nonfiction Producers Association hosted a reception to introduce themselves. In between all that was some good information for documentary filmmakers and producers.

One of the big players in the land of docs was there, Netflix. Its audience or membership today numbers about 94 million. Cindy Holland, VP of original content, was the keynote speaker; her company earned three Academy Award nominations the morning she spoke to a standing-room-only crowd. (One Oscar nod came for Ava Duvernay's feature doc 13th, and two more for shorts.) According to Holland, Netflix has made a huge commitment to new works with a $6 billion budget this year, second only to ESPN. "We believe there is a huge future for docs, and we are staffing for that," she said. "We are ready to open the doors and see what people can produce for and with us."

In 2017, Netflix will have twice the programming of unscripted shows as last year, with up to 20 new titles and 1,000 hours in the pipeline. Coming soon is the continuation of their 2015 mega hit, Making a Murderer. The producers are currently working on new episodes. A new Bill Nye talk show also hits screens this spring.

Unlike cable channels, Netflix doesn't have to worry about primetime slots, demographics, genres, or the US market only. Holland admitted they don't spend a lot on development. "We have a real bias to production,” she explained. "We are looking for high-quality programming, diverse shows for a global audience. We are looking for the best storytellers. And we welcome stories from around the world. That could be local ideas that appeal or big global ideas." At the end of her session, she spent a lot of time giving out contact information for the new hires on her development staff.

John Paquet, executive producer at Chicago-based Intersport, found Holland's presentation to be enlightening. "Their service is different from the traditional network, and her insight and approach to programming and acquisition was refreshing," he noted. "Especially hearing that she has not been confined by formats or lengths of projects, and that she is open to new ideas. As producers, we need not be confined by the screen and make sure we understand where the audience is consuming content, because that target keeps moving away from linear television."

First-time attendee Dawn Hirn agreed. "As a female who has 'risen in the ranks,' Holland is an inspiration. Her down-to-earth personality and humble background was refreshing. And she knows her stuff." Hirn was at Realscreen getting a sense of where the nonfiction industry is these days, and also pitching her film, Our Backpack, about the death of her young son. She is hoping to capitalize on the rise in faith-based films. However, Hirn found, "The executives I talked with are hesitant about 'new' subjects because of their fear of losing viewers. They seemed to want to stay in the 'safe zones' of Housewives, etc. To sell my show, I'd have to find an executive who thinks more forward and who is willing to take a chance."

Succeeding in this business was on everybody's mind while at Realscreen. You have ample opportunities to meet acquisition folks, pitch executives, and search out the right niche for your programming. Jay Hunt, chief creative officer of the UK's Channel 4, threw a curve ball into the mix. In her keynote, she suggested that a little failure as a means to success was a good thing. The very open and engaging Australian talked about how shows that were once flops, were cared and nurtured for, and eventually, became hits. "The reason Channel 4 succeeded is because it failed," she emphasized. "Most viewing is habitual. You watch what you know. Yet you have to grow new hits." Fear of failure, she added, is why some shows never get a chance.

When Hunt was thrust into the leadership role in 2013 at Channel 4, "It was bloody awful." She changed the way her team worked, and how they created shows. "We have to risk failing and have to trust each other. Failure is just a success that hasn't happened. We have to be confident." This point was well received by the crowd, many of them filmmakers and producers. She explained that for those wanting to pitch her channel with a show, they must come in with an ambitious idea. "We are living in extraordinary times. Let's be bold, let's have cultural insights." She concluded, "There is nothing more persuasive than passion."

Other hot spots during the Summit were the panels on sports docs, true crime and the state of documentaries. Sports programming is "going through the roof," according to Tom Farrell, CEO of The WorkShop. That's because the shows are going beyond the story on the field. And that's what brings in viewers. A perfect example is O.J.: Made in America; it earned an Academy Award nomination the first day of Realscreen. ESPN's John Dahl said, "The OJ doc is not about sports, but about a sports figure."

Scott Langerman of Ace Media has a partnership with the NFL Players Association. For them, docs are "an opportunity to build a brand for the athlete. They sum up what we are trying to accomplish: show the other sides of athletes." Farrell highlighted another perk of working with athletes; they are used to having the camera on them. He currently has a program in production with Amazon about tennis great Novak Djokovic.

How do you get a big name to agree to having a camera follow them? Dahl explained, "There has to be a lot of trust and cooperation." Bottom line for Ross Bernard of EPIX: "The idea must be mutually beneficial to all parties." EPIX scored a success in 2016 with its intimate profile of tennis great Serena Williams. "Shedding some light on their family and their personal interests, it completes them as a person," noted Bernard. "You can relate to them as a mass audience." Bottom line for ESPN: "We don't want to hit the same note with each show. We need variety and to mix it up, to keep it fresh."

Crime programming is rocking the ratings, too. The accounts lend themselves to great storytelling. Yet, outlets like Investigation Discovery and producers are looking for new approaches. Kevin Bennett, general manager of ID, said "Even if we say no to a concept, as a crime network, it's going to come back around again."

The Doc Talk session "Who Wants What" revealed what we are all thinking: We are in the golden age of documentaries because there are so many platforms. "Millennials grew up with docs, and have an appetite for it," explained John Miller-Monzon of CMT. "Great documentary filmmaking requires great creative vision. We are all passionate about films, but not all of them work." As always, CMT, CNN, PBS and Discovery are all open to new documentary ideas.

Decreasing production budgets and profit margins, and more competition are always a subject for conversation at Realscreen. "The State of the Unscripted Nation" panel tackled this subject pitting producers against networks. Michelle Van Kempen of the Nonfiction Producers Association, and a former co-owner of the company, Film Garden Entertainment, liked the conversation. "There are such intense pressures on both networks and producers right now, that I think it's important to talk about those pressures in a public way, with the ultimate goal of easing tensions between the two so the industry can grow and change." David Lyle, PactUS President, agreed: "For a healthy ecosystem, there has to be health on both sides."

If there were soft spots this year, it was around the absence of top-level executives who stayed at Sundance, and the talk about virtual reality. Last year's packed session was just a memory. The VR panel was muted this time around with only about half the seats taken. Experts blamed the sluggish debut on the cost of equipment for viewers, and bad uses of the format. Yet, the panelists were still passionate about the product: Brady Connell of Base Camp Films said, "In five years we will be booming. The amount of content will be astronomical."

Lauren Cardillo is an Emmy Award winning filmmaker who is currently producing two independent documentaries; one about a promising Olympic athlete, and the other, a local production of the holiday favorite, "The Nutcracker."

END_OF_DOCUMENT_TOKEN_TO_BE_REPLACED

Keeping It Real and Authentic at Realscreen