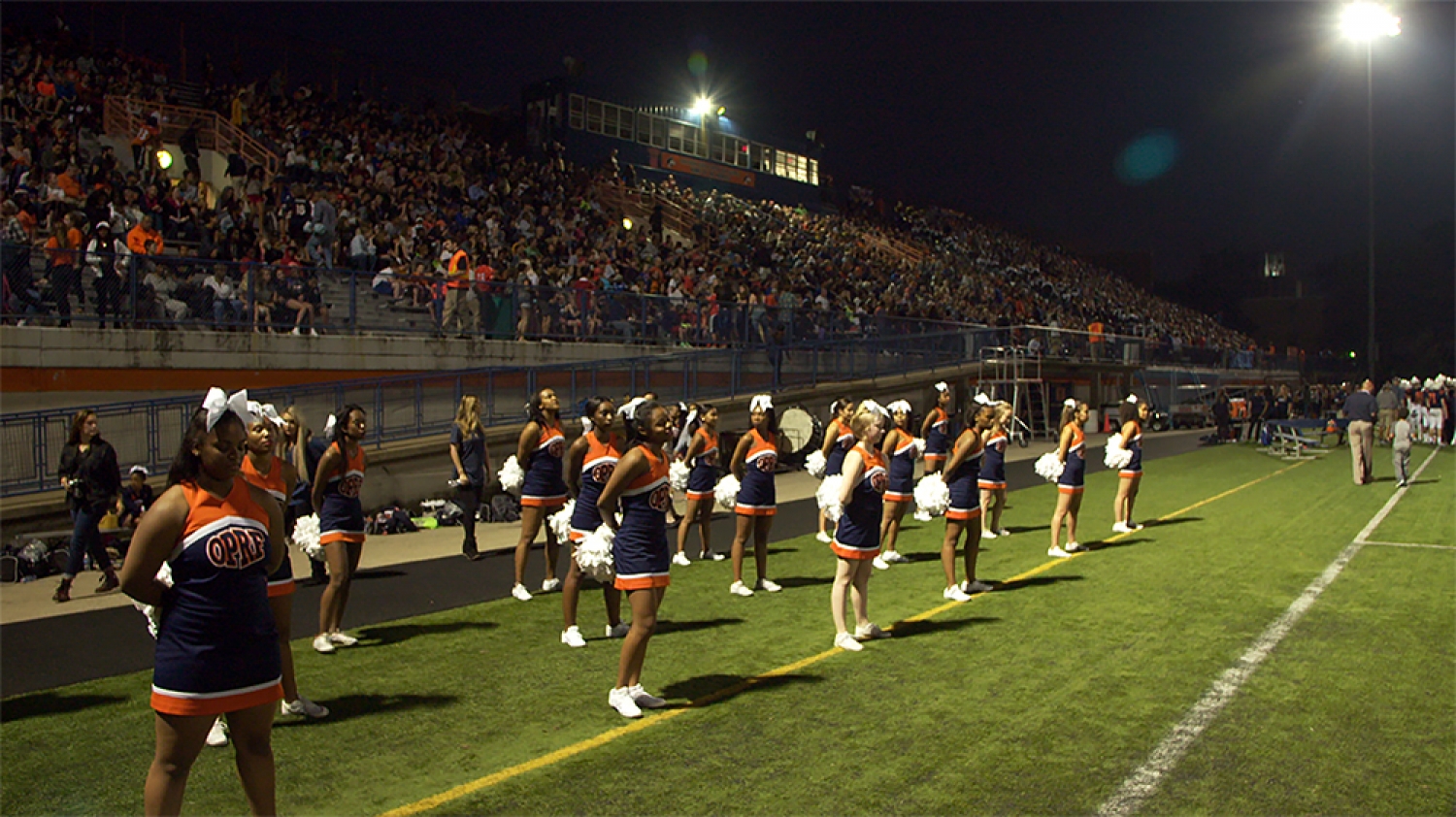 Filmmaker Steve James earned the first Best Documentary Oscar nomination of his distinguished career earlier this year for Abacus: Small Enough to Jail, a film that took him far from his home turf of Chicago to New York's Chinatown. But he's back on more familiar ground with his latest project, the Starz documentary series America to Me.

Across 10 episodes, James weaves the stories of a group of mostly minority students navigating life at racially-diverse OPRF—Oak Park and River Forest High School—a stone's throw from where he lives in suburban Chicago. "The location is three blocks from my house," James tells Documentary. "I have never been closer to a subject."

It's also where he sent his own kids to school. OPRF is nestled in a prosperous, progressive community that resisted the white flight that typified other Chicago neighborhoods when black families moved in decades ago. The school boasts an impressively mixed student body: majority white, but with a substantial percentage of black, Latino and multiracial kids. On the surface it would seem a place of equal opportunity, but the academic achievement of black students chronically lags behind their white counterparts, despite concerted efforts by the school administration to close the performance gap.

"There is some really great teaching going on at that school," James notes. "There is some really inspired coaching and commitment, without question. But it's also not succeeding in ways that it needs to succeed. This is such a big school and a complex organism, I do see it as a kind of stand-in, in some ways, for America—both the promise and the possibility, but also the ways in which we fall short."

Much like the broader American society, racial dynamics pervade the OPRF experience. "This school is crazy. It's like a social experiment,' declares Charles Donalson in the first episode, a junior who is one of 12 students James tracked over the 2015-2016 school year, along with some teachers and administrators. Lest the reality remain unclear by the end of Episode One, assistant principal Chala Holland puts the atmosphere on campus in context: at OPRF, she observes, "No space is race-neutral."

America to Me captures the casual segregation within the school—in the cafeteria, for instance, where white students often stick to the company of white students, African-Americans with African-Americans, etc. Students who do venture across ethnic barriers stand out; one of them, another of James' characters, is senior Kendale McCoy, a member of both the mostly white marching band and the mostly black and Latino wrestling team. McCoy laments that white students aren’t comfortable talking about race, adding at one point, "My white friends, they don't even know who Malcolm X is; they don't know who Biggie Smalls is."

James describes his goals with the series as profiling "the lives of mostly black and biracial kids [and] to understand something about the obstacles and systematic racism that they face despite living where they live." He also wanted "in a very firsthand and personal way to understand what was going on in that school…to look at the issue of educational equity and understand why the school has for many decades not meaningfully impacted in improving those inequities."

Two white students enter the scene as central characters, but not until the middle of the series. James says he found white parents reluctant to let their children take part in America to Me, fearing their kids would be portrayed as emblems of white privilege. "I mistakenly thought that I could recruit them more quickly," James recalls. "Maybe because I was a white filmmaker in the community, I thought it would be easier. I was wrong about that."

As James states in a voiceover track in America to Me, school principal Nathaniel Rouse declined to sit for any interviews for the series, although he is heard from in some vérité footage. The school superintendent likewise proved ill-disposed to welcome the director and his camera crews. James had to plead his case for access to the school board, which sided with him.

"I think there was a fear that the administration was going to be singled out for too much blame, or all the blame, for what Oak Park has failed to do over the years," James comments. "I do think it was shortsighted; just because you don't participate in a film doesn't mean you escape scrutiny entirely. All you are doing, ultimately, is not lending your voice to the conversation and sharing your passions, your concerns, your answers."

The impression emerges that some in the administration felt uncomfortable with the idea of a white director coming in to document the experience of students of color, despite James' track record with Hoop Dreams (1994) and The Interrupters (2011), films that explored characters from some of Chicago's more economically disadvantaged African-American neighborhoods. James did enlist the services of a diverse group of segment directors to work on America to Me, including Kevin Shaw, Rebecca Parrish and Bing Liu—the director of the acclaimed documentary Minding the Gap.

"I directed stories of three students that all are pretty prominent [within America to Me]," Liu tells Documentary. Among them is the aforementioned Donalson, a star of the school’s Spoken Word Club. "There’s also Grant, this freshman who is very much a fish out of water," Liu adds. "He's so shy, a little nerdy. And his main story arc is that he sort of gets a girlfriend for the first time in his life, and he's navigating it. But thematically it's related to the project because he has an African-American father and a white mother and there are all sorts of really sensitive issues that they have to face, both in looking back to their marriage when they first met in Detroit, but also in moving forward and sort of handling how their son identifies racially."

Liu continues, "Then there's a senior named Jada, and she is just this firecracker activist who is really trying to tackle inequities in the school. She starts making a Web series called Dear OPRF, modeled after the Netflix series Dear White People, and it gets her in all sorts of difficult situations because it's a very divisive, polarizing topic and some students side with her and some don't."

To James, there is intrinsic value to the characters and their experiences, beyond how they fit into the series' thematic concerns. "There are so many aspects to the stories of the kids we follow that both have to do with race and have nothing meaningfully to say about race, but are just the lives of kids," he insists. "I think we don't see those kinds of stories enough in communities of color. We are so focused on the most desperate situations. And, again, I am pointing the finger at myself when I say that." 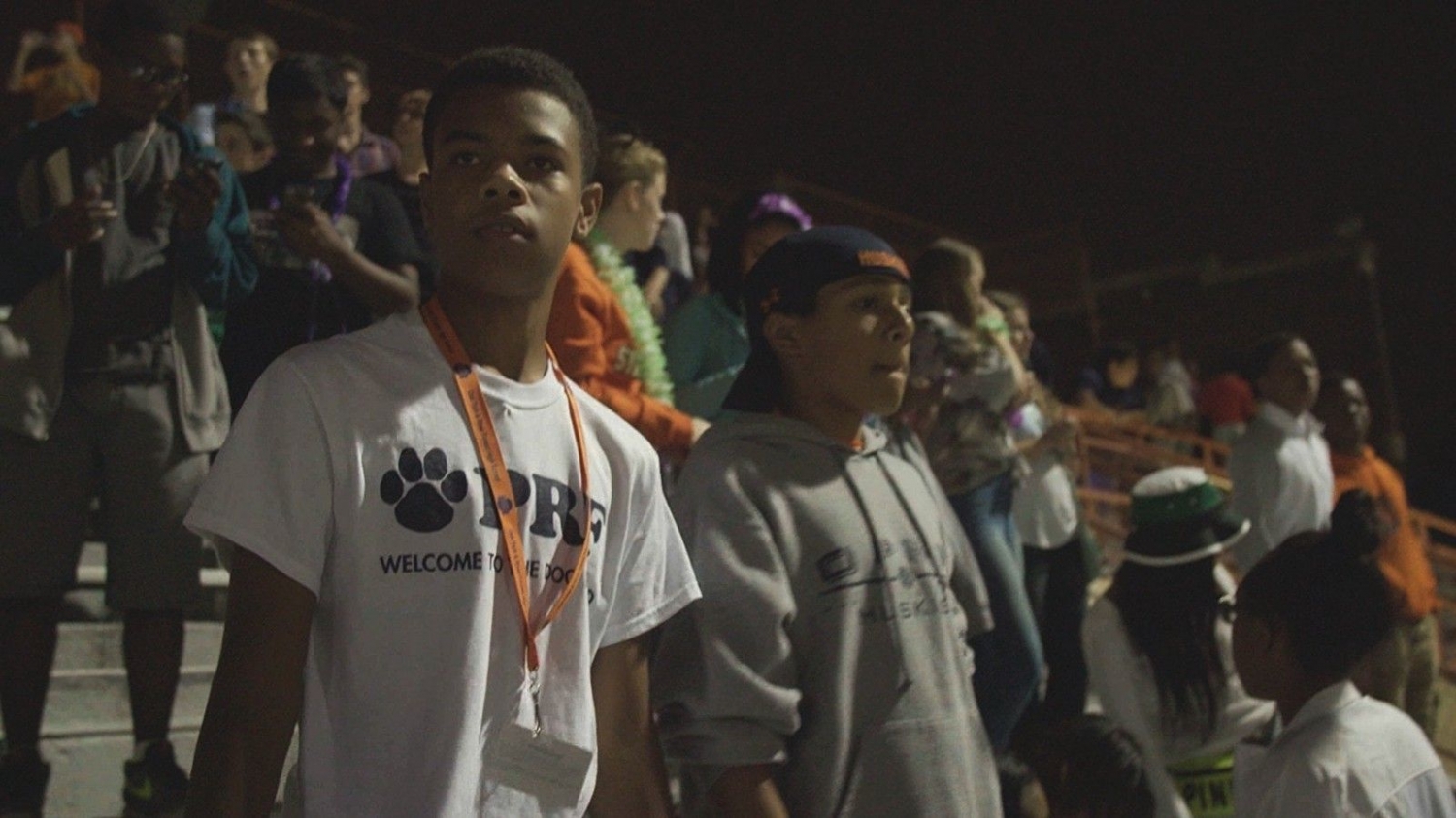 The title of the series comes from a line of poetry by Langston Hughes, who wrote, "America never was America to me, and yet I swear this oath—America will be!" James explains, "It's about people who have built America, but don't feel like they belong in America. And we take that last line, "America never was America to me," to echo that sense of disenfranchisement and not belonging, but also to say that this is a story about America through the eyes of this generation of young people in this particular place and time."

On the question of why America has never been America to all, James does not excuse progressive-minded whites from culpability. "One thing I have discovered about liberal white people is that our liberal politics can be paralyzing because we have enough awareness and sensitivity to know what not to say," he suggests. "But in so doing we don't say much of anything… There is more left unsaid. And that hurts real change."

Neither does the director ignore the responsibility of conservatives for the country's increasingly aggravated racial politics under President Trump, the successor to America’s first black president. "One could argue that we would never have had Trump without Obama first," James observes. "He was a black man in a position of power. It contributed to us getting Trump. Because there is this fear."

The fate of America, just as the fate of the young people profiled in the series, remains uncertain in a land of unfulfilled dreams of racial progress. James harbors some optimism, even if his documentary series elucidates the many ways people of color are held back, treated with suspicion and subjected to limited expectations. "There is a lot that you can get discouraged about," James acknowledges. "But there is also a lot that you can get encouraged about. And the thing that encourages me most are the kids, the kind we find in this series who have a level of sophistication, passion and understanding about the world they are living in beyond their years."

He adds, "It's really from kids like the ones we are featuring in this series that the real leaders and change agents of tomorrow are going to come…This generation has decided in many ways that they are not going to put up with the status quo anymore."

America to Me, a 10-episode series, premiered August 26 on Starz and will air on successive Sundays through September. The series is also available for streaming on Starz.com. America to Me was executive-produced by Kartemquin Films and Participant Media.

END_OF_DOCUMENT_TOKEN_TO_BE_REPLACED

Be True to your School—R.J. Cutler and David Zeiger Bring Cameras into the Classroom