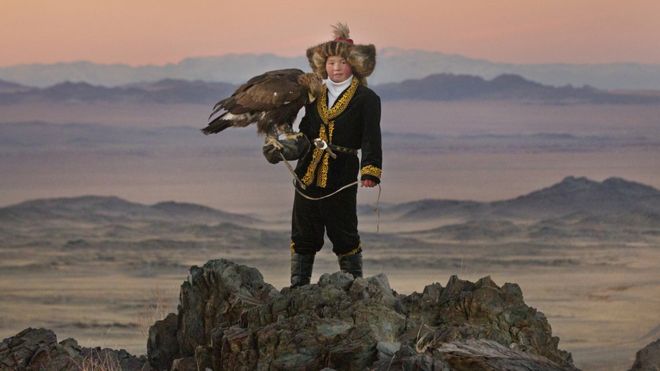 At BBC, Stephen Mulvey asks whether Otto Bell's The Eagle Huntress should be considered a documentary.

Early publicity for the film did little to inspire confidence, by stating that Aisholpan had fought "an ingrained culture of misogyny to become the first female eagle hunter in 2,000 years of male-dominated history" - a claim that US historian Adrienne Mayor has shown is untrue. This line was recast to say that Aisholpan is "the first female in 12 generations of her Kazakh family" to be an eagle huntress. But Mayor and others still argue that the film creates a false impression, by failing to mention other Kazakh eagle huntresses, and exaggerating the patriarchal pressures that Aisholpan had to overcome.

PBS NewsHour reports on online "vote-brigading" against Raoul Peck's Oscar-nominated I Am Not Your Negro.

Here at the NewsHour, we're no strangers to the comment section, a place for healthy conversation but also where people come to troll. And it's not out of the ordinary for film critics and everyday movie-goers to diverge in opinion on a film's worthiness. But in the case of I Am Not Your Negro, where so many reviews rolled in before the film had actually been seen, it's clear something else is going on.

At Indiewire, a panel of critics name documentaries that might help make sense of the world today.

This week's question: This past Friday saw the release of Raoul Peck’s I Am Not Your Negro, a documentary that speaks to our present moment through the writings and actions of the late James Baldwin. What other documentaries — recent or not — might help people better understand and/or respond to the state of the world today?

"The main change is the increasingly electronic accessibility of imagery, which has been beneficial. Electronic communication has sped everything up. So we now have faster communication with reps at different companies. It also means there is an expectation of instantaneous compliance with requests on the part of our clients."

At POV, the staff highlights four documentaries to open dialogue around refugees.

As the nation's policymakers debate how to respond to refugees, community members may seek out resources that help open dialogue around the issues. At POV, we’ve seen how compelling storytelling can create space for open and informed conversations about hot-button issues and offer insights into the human side of policy debates. Many faces of international conflicts and refugee experiences at home and abroad have been revealed on our series, and we recommend four films that bring audiences to deeper understanding of these critical issues.

"God Grew Tired of Us is full of moments that stick with you and make you think differently about excess, waste and the things we take for granted living in a modern world. Quinn is an amazing director with a talent for capturing things that are not so obvious on film. His intimate style of filmmaking makes you feel like you know and love his subjects. By documenting the massive struggle of the people of Sudan in such an authentic way, he introduces a means by which we can tangibly make a difference for others."

END_OF_DOCUMENT_TOKEN_TO_BE_REPLACED

A Bird in the Hand: A Look at Otto Bell's 'The Eagle Huntress'