Awards Spotlight: And She Could Be Next 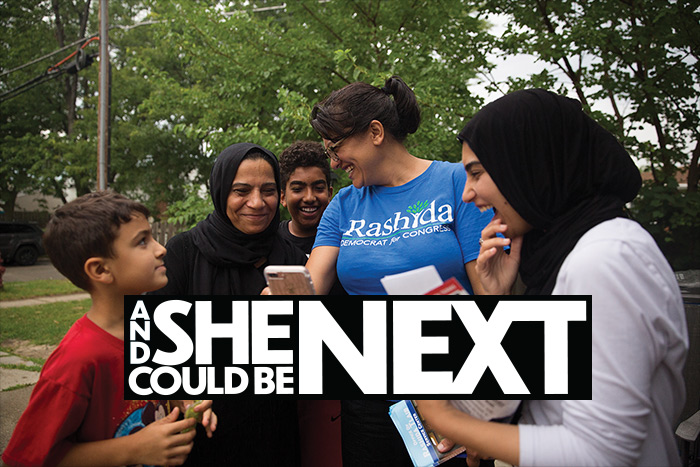 As American demographics rapidly shift, And She Could Be Next, POV’s first broadcast miniseries, tells the story of a defiant movement of women of color, transforming politics from the ground up by fighting for a reflective democracy. The series follows candidates and organizers across the country, asking whether democracy can be preserved and made stronger by those marginalized. Filmed from 2018- 2019 by a team of women of color filmmakers, the miniseries features history-makers including Rashida Tlaib and Stacey Abrams.

Get an exclusive screener and get behind the scenes in a digital conversation with Directors/Producers Grace Lee and Marjan Safinia, CEO Nsé Ufot of New Georgia Project, and Executive Director of Asian Americans Advancing Justice Atlanta, Stephanie Cho; moderated by LaTosha Brown, Co-Founder of Black Voters Matter Fund.

Grace Lee recently directed and produced the two-part documentary AND SHE COULD BE NEXT, about women of color transforming American politics, which broadcast on POV in 2020.  She was also a producer/director on ASIAN AMERICANS, a groundbreaking 5-part series that casts a fresh lens on US history through the stories, contributions and challenges of Asian Americans. Previous credits include the PeabodyAward-winning AMERICAN REVOLUTIONARY: THE EVOLUTION OF GRACE LEE BOGGS, the Emmy-nominated MAKERS:WOMEN IN POLITICS for PBS; the interactive online documentary K-TOWN ‘92 about the 1992 Los Angeles civil unrest, OFF THE MENU: ASIAN AMERICA (PBS)  and THE GRACE LEE PROJECT (Sundance Channel).   She is a co-founder of the Asian American Documentary Network,and a member of the Academy of Motion Picture Arts and Sciences.

Marjan Safinia is an Iranian documentary filmmaker whose films examine identity, community and social justice. Most recently, and together with Grace Lee, she produced and directed AND SHE COULD BE NEXT, a two-part documentary series about women of color transforming American politics from the ground up, which debuted as POV’s first ever series in June 2020 and was nominated for an NAACP Image Award for Best Documentary. Until 2018, Marjan was the longest-serving President of the Board of Directors of the International Documentary Association (and the first woman of color to lead IDA since its founding in 1982.) She currently serves on the Board of Directors of Chicken & Egg Pictures and is a member of the Academy of Motion Picture Arts & Sciences. Marjan is one of five co-hosts of the longest-running online documentary community, The D-Word, and is a regular juror, programmer, speaker and connector of all things documentary.

Nsé Ufot is the Chief Executive Officer of the New Georgia Project (NGP) and its affiliate, New Georgia Project Action Fund (NGP AF).  Nsé leads both organizations with a data-informed approach and a commitment to developing tools that leverage technology with the goal of making it easier for every voter to engage in every election.  Nsé and her team are also developing Georgia’s home-grown talent by training and organizing local activists across the state.  She has dedicated her life and career to working on civil, human and workers’ rights issues and leads two organizations whose complementary aim is to strengthen Georgia’s democracy.  Under Nsé’s leadership, NGP has registered nearly 400,000 Georgians to vote.

Stephanie Cho is the Executive Director for Asian Americans Advancing Justice-Atlanta. She brings over 20 years of experience in labor and community organizing, strategy planning, and fundraising at the local and national level. Originally born in South Korea, Stephanie grew up in Oregon. After University, she started her career in organizing and movement work. She has been a community organizer, program director for LGBTQ youth programming, director of training for a national fellowship program, a labor organizer, and organizational consultant. Before coming to Advancing Justice, Stephanie was the Los Angeles Director of the Restaurant Opportunities Center (ROC-LA) where she worked to raise industry standards and wages for LA’s restaurant workers. She believes in creating more space for new leadership, developing healthy and sustainable ways of working towards justice for all, and is moved by transnational forms of expressions of solidarity and movement building.

LaTosha Brown is an award-winning organizer, philanthropic consultant, political strategist and jazz singer with over twenty years of experience in non-profits and philanthropies on issues related to political empowerment, social justice, economic development, leadership development, wealth creation and civil rights. She is the co-founder of Black Voters Matter Fund, a power-building southern-based civic engagement organization. She is also principal owner of TruthSpeaks Consulting, Inc., a philanthropy advisory firm, and the founding project director of Grantmakers for Southern Progress. Throughout her career, she has distinguished herself as a trusted expert in political strategy, rural development and special programming nationally and regionally.