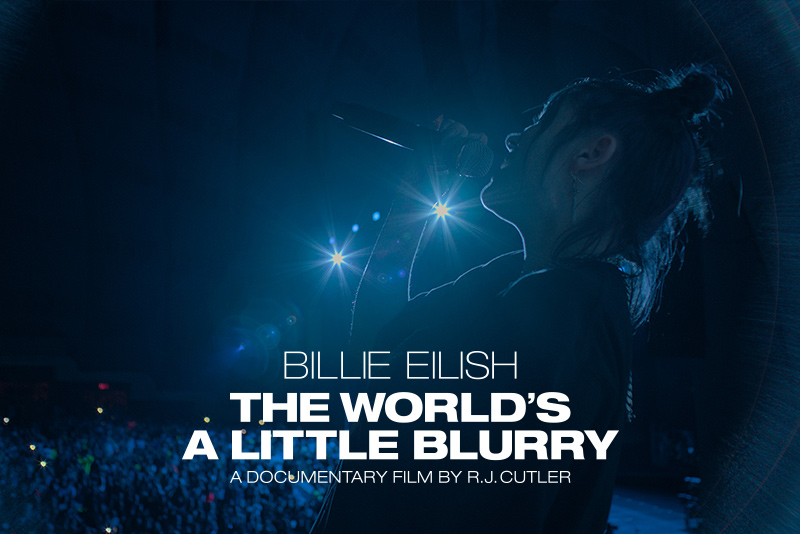 Billie Eilish: The World’s A Little Blurry tells the true coming-of-age story of the singer-songwriter and her rise to global superstardom. From award-winning filmmaker R.J. Cutler, the documentary offers a deeply intimate look at this extraordinary teenager’s journey, at just 17 years old, navigating life on the road, on stage, and at home with her family, while writing, recording and releasing her debut album “WHEN WE ALL FALL ASLEEP, WHERE DO WE GO?”

Get an exclusive screener to the film then behind the scenes in a digital conversation feat. Director/Writer/Producer R.J. Cutler, Director of Photography Jenna Rosher and Editors Greg Finton and Lindsay Utz; moderated by KPCC Film Critic Amy Nicholson.

R.J. Cutler is an award-winning director and producer who has made some of the most significant documentary films and television series of the past quarter century, including the Oscar-nominated The War Room, Emmy- nominated A Perfect Candidate, Sundance Award-winning The September Issue, Peabody Award-winning Listen to Me Marlon and The World According to Dick Cheney. His most recent work includes the critically acclaimed projects Billie Eilish: The World’s a Little Blurry, a cinema verité coming of age story of the singer-songwriter; BELUSHI, about the too-short life of once in a generation talent John Belushi told through previously unheard audiotapes; and the docuseries “Dear…” which profiled icons such as Spike Lee, Gloria Steinem and Misty Copeland, telling their stories through the eyes of those who have been most affected by their work. Cutler is also the founder of This Machine, a production company focused on developing scripted and non-scripted projects for film and television.

Jenna Rosher has produced, directed and filmed a variety of social, political and music documentaries for television and film for over twenty years. A third generation cinematographer, Jenna combines her love of filming with her passion for people and storytelling. This has given her the opportunity to not only shoot, but also direct a number of high-profile, award-winning projects. Jenna has had the great fortune of collaborating with such talents as Heidi Ewing & Rachel Grady (Jesus Camp/Norman Lear: Just Another Version of You/12th and Delaware, One of Us), Amy Berg (Janis Joplin: Little Girl Blue/An Open Secret), R.J. Cutler (September Issue/Billie Eilish: The World’s A Little Blurry), Marina Zenovich (LANCE) and Lauren Greenfield (Generation Wealth). Jenna co-produced and filmed Call Your Mother for Comedy Central with Heidi Ewing and Rachel Grady and is the Director of Photography of Billie Eilish: The World’s A Little Blurry.

Lindsay Utz, ACE is the editor of the 2020 Academy Award-winning documentary American Factory. Her other credits include the Oscar-shortlisted Bully (2011), First Position (2011), Buoy (2013), In Country (2014), Quest (2017) Miss Americana (2020) and Billie Eilish The World's A Little Blurry (2021). She has been nominated for every major editing award in her field, and in 2018 won the Cinema Eye Honors award for Outstanding Achievement in Editing for her work on Quest, which was also nominated for both Emmy and Peabody Awards. She is a member of American Cinema Editors and the Academy of Motion Picture Arts and Sciences.

Greg Finton, ACE, has worked for over twenty-five years, editing documentaries, television and feature films. His credits and awards include the documentaries IT MIGHT GET LOUD (2009, Satellite award nominee), WAITING FOR “SUPERMAN” (2010, Sundance Audience Award winner, ACE Eddie award nominee), THE WORLD ACCORDING TO DICK CHENEY (2013, which he also co-directed with RJ Cutler), HE NAMED ME MALALA (2015, ACE Eddie and Emmy Award nominee), and ROBIN WILLIAMS: COME INSIDE MY MIND (2018, ACE Eddie Award winner).  Other credits include THE FIGHT (2020, Critics Choice award nominee), WATSON (2019), A MOTHER'S PROMISE (2008 Barack Obama bio film), and ESPN 30X30, FANTASTIC LIES (2016).