Awards Spotlight: The Lady and The Dale 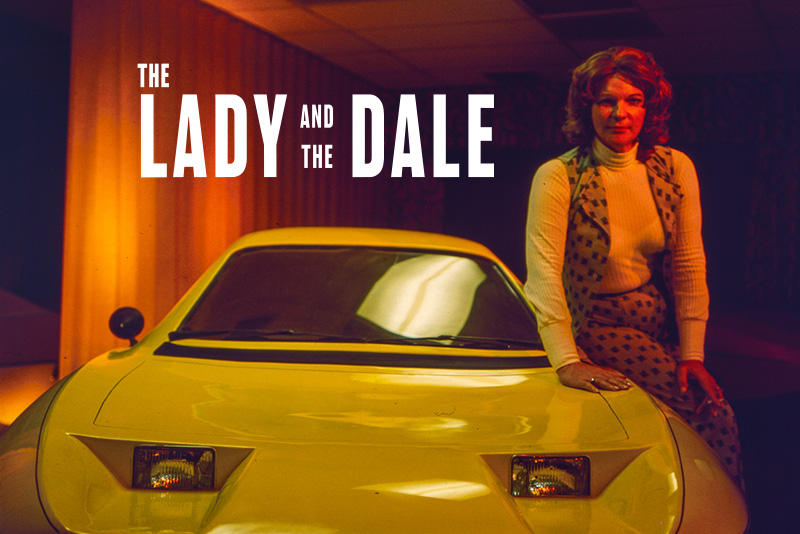 HBO’s The Lady and The Dale details the rise and fall of 1970’s transgender entrepreneur Elizabeth Carmichael and her radical car The Dale. The futurist vehicle promised to get 70 miles to the gallon, thrusting Liz into fierce public and media scrutiny which uncovered a web of mystery and suspicion about the car’s technology and her own checkered past. The documentary series is executive produced by Emmy®-winning producers Mark and Jay Duplass and directed by Nick Cammilleri and Zackary Drucker.

Get an exclusive screener then join us for a digital conversation feat. Directors/Executive Producers Nick Cammilleri and Zachary Drucker, and Executive Producers Mark Duplass and Jay Duplass, moderated by Inkoo Kang, TV Critic at The Hollywood Reporter.

A proud native of New Hampshire, Nick grew up watching films like Evil Dead, Clerks, and Bill & Ted’s Excellent Adventure. He unabashedly loved unique subcultures, eccentric characters, underdog stories, and tragedies like Citizen Kane. In high school, he often neglected his schoolwork to instead solve cryptography, crosswords, anagrams. However, he frequently found film to be the most captivating puzzle of all. At 18, after seeing The Shawshank Redemption, he made $3K rolling dice, packed up, and moved to California to make movies. From 2011-2021, Nick created, co-directed, and produced the HBO documentary series The Lady and the Dale, which is airing on HBO Max. The series was produced by the Duplass Brothers. Currently, Nick has three projects in development. He plans to write and direct scripted feature films and limited series TV for the rest of his life.

Zackary Drucker is an independent artist, filmmaker, and cultural producer. She has performed and exhibited her work internationally in museums, galleries, and film festivals including the Whitney Biennial 2014, MoMa PS1, Hammer Museum, Art Gallery of Ontario, MCA San Diego, and SF MoMA, among others. Drucker is an Emmy® nominated producer for the docuseries This Is Me, and was a producer on the Golden Globe and Emmy® Award-winning Amazon show Transparent. The Lady and The Dale, her directorial debut for television, premiered on HBO in January 2021.

Under their banner Duplass Brothers Productions (DBP), award-winning filmmakers Mark Duplass, Jay Duplass and Mel Eslyn create original projects for film, television, and digital media. In television, DBP is under a first-look deal with HBO which has yielded the hit series ROOM 104, TOGETHERNESS, and the HBO animated series ANIMALS, which sold after premiering at Sundance in 2015. Currently, DBP is producing a series for HBO starring Bridget Everett. DBP is also active in the docuseries television space, best known for producing Netflix’s WILD WILD COUNTRY, winner of the Emmy Award for Outstanding Documentary or Nonfiction Series in 2018. Most recently, DBP produced the popular series THE LADY AND THE DALE on HBO, which followed Elizabeth Carmichael, a larger-than-life entrepreneur who rose to prominence in the 1970's with her promotion of a fuel-efficient, three-wheeled car known as The Dale. The team also produced ON TOUR WITH ASPERGER'S ARE US for HBO, as well as EVIL GENIUS for Netflix. DBP's next docuseries SASQUATCH airs on Hulu this Spring.