Getting Real NOW: At the Intersection of Storytelling and Community

Filmmakers and community media practitioners Louis Massiah and Yvonne Michelle Shirley explore the legacy of place-based and participatory storytelling. Join us for a digital discussion of what has been powerful about that work historically and what is possible for future generations. They will ask how cultural work and filmmaking are responding to this national reckoning with power, authorship and systems of oppression. 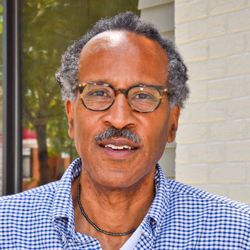 Louis Massiah is a documentary filmmaker and founder of Scribe Video Center. Through Scribe he assists emerging filmmakers author their own stories, including the Precious Places Community History project, Muslim Voices of Philadelphia, and the Great Migration - A City Transformed. Massiah’s documentaries include The Bombing of Osage Avenue, W.E.B. Du Bois – A Biography in Four Voices and How to Make a Flower. Other projects include video installations for The President’s House: Freedom and Slavery in the Making of a Nation and the Musée des Civilisations Noires in Dakar, Senegal. He is the project director and co-programmer of We Tell: 50 Years of Participatory Community Media.

Yvonne Michelle Shirley makes narrative and documentary films. She is a graduate of New York University’s Tisch School of the Arts, and is inspired by filmmaking in the social realist tradition. Her short film, Flowers, won Best Short Film in the HBO Short Film Competition at the 2016 American Black Film Festival. She produced the award-winning documentary short, Black 14, directed by Darius Clark Monroe and executive produced by Spike Lee. She produced and directed the webseries, Frame by Frame, for Topic. Yvonne has directed work for NY Times' T Magazine, AFROPUNK, and Nike. In 2019, she was named one of DOC NYC's 40 under 40. She is currently producing a feature-length documentary on the artist Gil Scott-Heron, directed by Orlando Bagwell. Yvonne lives in the city of her birth, Newark, NJ, where she is working with local storytellers to develop The Newarkive—a creative archive, centering imagery of and by Newark’s Black communities. She is also a proud member of the New Negress Film Society, a New York-based Black women’s film collective.