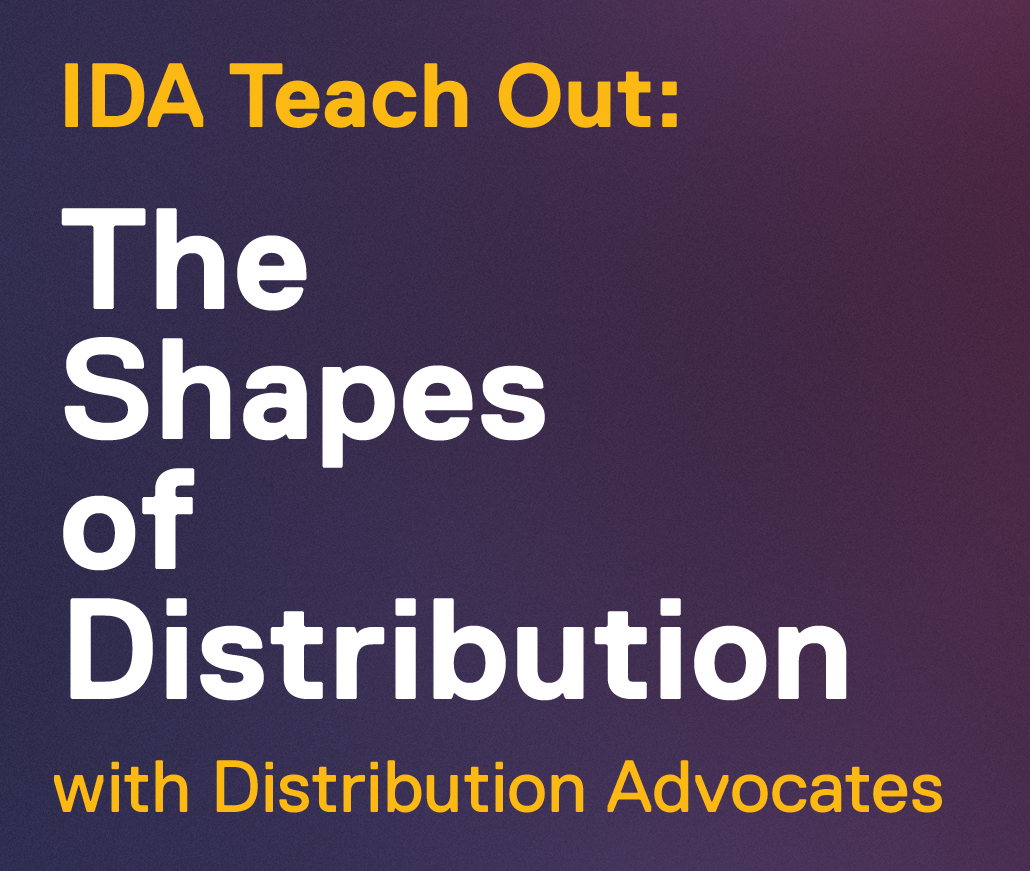 Karin Chien from Distribution Advocates will walk us through lessons and points of intervention in distribution negotiations and talk with independent filmmakers Stephen Maing (Untitled Amazon Union Documentary, Crime + Punishment) and Emma D. Miller (What We Leave Behind, Untitled Mistress Dispeller Project) to shed some light the opaque and intimidating process of selling and distributing films.

This event will be live via Zoom on November 7, 2022, 9:30 am PT. Live captions and ASL interpretation will be provided.

About Distribution Advocates
​Distribution Advocates works to collectively reclaim power for independent storytellers in the current systems of distribution and exhibition. We are a coalition-in-formation striving to advocate for filmmakers and maintain plurality and originality in a culture that needs it more than ever. We fight for radical transparency, rebalancing entrenched inequities and blazing a new, more interesting, accessible and inclusive way forward.

Stephen Maing
Stephen Maing is an Emmy-award winning filmmaker based in New York City. His feature documentary CRIME + PUNISHMENT, which he directed, filmed and edited over four years, won a Special Jury Award at Sundance, an Emmy Award for Outstanding Social Issue Documentary and was shortlisted for the Academy Award for Best Documentary. His previous films, HIGH TECH, LOW LIFE, directed, filmed and edited over five years, and THE SURRENDER, have screened internationally and were released on POV and Field of Vision, respectively. Maing is a 2021 United States Artists Fellow, Sundance Institute Fellow, NBC Original Voices Fellow, John Jay/Harry Frank Guggenheim Reporting Fellow and recipient of the IDA's Courage Under Fire Award. He is a member of the Academy, a frequent visiting artist and lives in Ridgewood, Queens with his partner and young daughter.

Emma D. Miller
Emma D. Miller is a documentary filmmaker and creative consultant. She recently produced Iliana Sosa’s debut nonfiction feature WHAT WE LEAVE BEHIND, which won two Special Jury Awards at SXSW 2022, was named a New York Times “Critic’s Pick,” and was released in select theaters and on Netflix by Ava DuVernay’s ARRAY Releasing. As development executive for nonfiction at Concordia Studio, Miller worked on Oscar-nominated and Emmy-winning documentary projects that premiered at Sundance, Tribeca, and Telluride and were distributed by Amazon, Apple TV+, Hulu, Netflix, and Magnolia Pictures. She previously served as casting associate for the Showtime doc series COUPLES THERAPY, programming manager at the Full Frame Documentary Film Festival, and associate producer for the Academy Award-nominated short KNIFE SKILLS (The New Yorker) and Sundance award-winning feature UNREST (Independent Lens / Netflix). She is currently producing Elizabeth Lo’s UNTITLED MISTRESS DISPELLER PROJECT with support from Impact Partners and Anonymous Content. She is drawn to projects that capture and instill the wonder of being alive, and offer new ways of seeing the world.

See a cheat sheet on how to approach distribution from Distribution Advocates here.