IDA Appoints Five New Members to Board of Directors 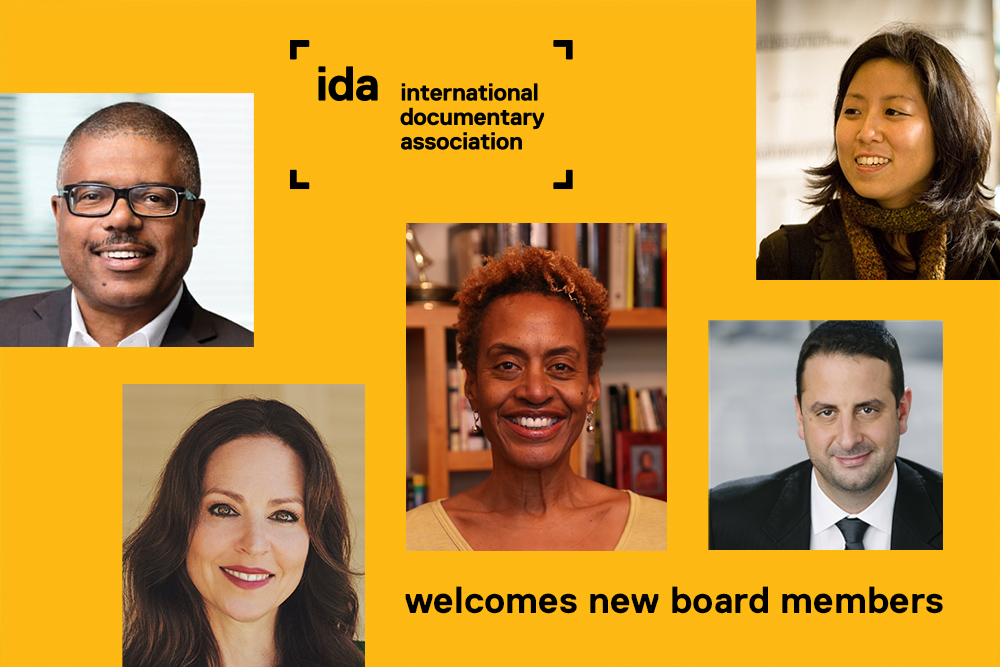 Los Angeles, CA (November 5, 2020) – The International Documentary Association (IDA) announced the appointment of five new members to its Board of Directors.

Newly appointed board members are:

“In this extraordinary year, we focused with intentionality on our efforts to continue building a strong organization that is responsive to the documentary community we serve” said Brenda Robinson, IDA Board President. “I am thrilled to welcome this celebrated class of thought leaders who have accepted the call to join us in our efforts to use our resources to continue making the greatest impact possible in the documentary field”.

Departing the IDA Board after having completed their terms are: producer, Stephen Nemeth; agent and former IDA Board President, Kevin Iwashina; and Jack Lerner, clinical professor of law and director, Intellectual Property, Arts, and Technology Clinic at UC Irvine. Lerner will transition to the newly created, non-board position of IDA advocacy counsel.

“I am very excited to welcome our new board members who each bring unique talents, experiences and perspectives to the IDA Board. They will help guide IDA as we strive to support documentary storytellers during these tumultuous times,“ said Simon Kilmurry, IDA’s executive director. “I also want to thank Stephen, Kevin and Jack for their many years of service. It’s a testament to their commitment and hard work that they leave IDA a much stronger organization than the one they found.”

Hallee Adelman is a Philadelphia-born writer, educator, and documentary film producer. As co-founder of World of Ha Productions, Adelman has served as an executive producer on documentary films including The Social Dilemma and US Kids. With a strong belief in the power of story to spread joy and hope and to spark important conversations for a better world, Adelman is honored to join the Board of the IDA.

Grace Lee is a Peabody-award winning filmmaker whose credits include American Revolutionary: The Evolution of Grace Lee Boggs, the doc series And She Could be Next and Asian Americans; and The Grace Lee Project. Based in Los Angeles, she is a member of the Documentary Branch of the Academy of Motion Picture Arts and Sciences and co-founder of Asian American Documentary Network (A-Doc).

Al Perry was born in North Carolina, came into his own in New York City in the 1980s/1990s and now lives in Los Angeles. Formerly a Wall Street lawyer, Al now works in operations at a media company. Other than in 2020, Al travels extensively around the world motivated by the desire to experience other cultures and the people who animate them. Among his other passions are documentaries and photography.

Amir Shahkhalili is a partner in the Television department at William Morris Endeavor. He represents notable directors such as Allen Hughes, Seth Gordon, and Kirby Dick & Amy Ziering. Amir was named the city of Los Angeles' 2019 Entrepreneurs in Residence where he served a yearlong term to increase diversity in the film industry. Shahkhalili joined the William Morris Agency in 2005, after graduating from University of California, Davis

Marcia Smith is president and co-founder of Firelight Media, which produces documentary films, provides artistic and financial support to emerging filmmakers of color, and builds impact campaigns to connect documentaries to audiences and social justice advocates. Under her leadership, Firelight Media was honored with a MacArthur Award for Creative and Effective Institutions. Firelight Media’s flagship Documentary Lab program has supported more than 100 emerging filmmakers over the past decade, who have premiered at festivals such as Sundance, and gone on to earn numerous festival, Peabody, and Emmy awards.