Another Body follows a college student’s search for justice after she discovers deepfake pornography of herself circulating online.

Sophie Compton is a British director, writer, and activist who tells women’s stories of injustice. As Artistic Director of Power Play, she has produced and directed six plays, including Fringe First-winning Funeral Flowers, taken on an Offie-nominated UK Tour (Bunker, BGAC). She has produced and directed work at Tate Modern, Science Museum, and V&A, and she is currently directing the feature documentary Holloway following ex-prisoners returning to the abandoned Holloway Prison (supported by Arts Council England). Sophie has led global activist campaigns that have led to changes to UK arts policy and Law Commission proposals for new legislation, and she has been invited to steering groups for international NGOs including the World Economic Forum. She trained in trauma-informed practice with Clean Break and draws on community activism to develop projects that empower women in process as well as output. She is an editor for climate magazine It’s Freezing in LA! Another Body is Sophie’s feature debut. 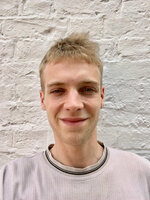 Reuben Hamlyn is an award-winning filmmaker whose films look through the intimate frame of individual experience to investigate power, injustice, and the impact of technology and media on identity and behaviour. His last film Roger tells the story of a service app worker who attempts to bypass technological barriers to forge a relationship with her client. Roger was commissioned by the BFI and BBC Arts to open their ‘Born Digital: Raised by the Internet’ season in 2019. The film premiered at BFI Southbank and aired on BBC Four; it was noted as ‘highlight’ of the programme by The Guardian and featured in Vogue Italia before winning the Jury Prize at Ennesimo Film Festival "Filosofia" and the ‘Young Talent Award’ at the New Renaissance Film Festival. Previously, Reuben made ‘BROTHER!’—an experimental documentary about masculinity in pro-wrestling subcultures. The film exhibited at Copeland Gallery, London and was featured in Tank Magazine, It’s Nice That, and i-D. Another Body is Reuben’s feature debut. 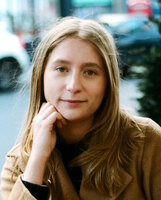 Elizabeth Woodward is a producer of documentary and narrative films and founder of Willa Productions. Her recent films include On the Divide (Tribeca Film Festival 2021, POV) and You Resemble Me (Venice Film Festival 2021, executive produced by Spike Lee, Spike Jonze, Alma Har’el, Abigail E. Disney). Past projects include Netflix’s The Great Hack (Academy Award shortlist, Emmy nominee, BAFTA nominee, IDA nominee, Cinema Eye winner, Sundance 2019); HBO’s hit series The Vow; and Persuasion Machines (Sundance New Frontier 2020). Her films have been supported by Sundance Institute, Tribeca Institute, Chicken and Egg, Film Independent, Impact Partners, Artemis Rising, Field of Vision, Level Forward, The Gotham, Perspective Fund, Berkeley Film Fund, Quiet, and the New York Foundation for the Arts. Elizabeth is a member of the Academy of Television Arts & Sciences and the Documentary Producers Alliance. She was selected for Berlinale Talents and for the Impact Partners Producers Fellowship. She is a graduate of Brown University and the University of Cambridge.