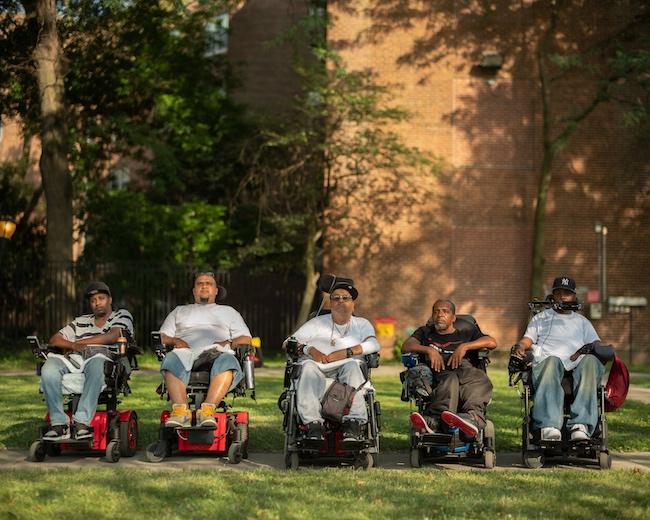 On a tiny island in NYC, a group of Black and brown disabled artists fight Covid and the city to protect the lives of 500 vulnerable nursing home residents.

Alexis Neophytides is a documentary filmmaker and educator based in New York City. Her work centers around community and how we find meaning in people and place. She is the co-creator, co-director and producer of Neighborhood Slice, a public television documentary series that tells the stories of longtime New Yorkers who've held onto their little corner of the city despite fast-growing gentrification. She produced and directed the series 9.99, for which she won a NY Emmy. Her short documentaries Doctor Kong, Coney Island’s for the Birds and Ethan 2018 (a Vimeo Staff Pick) screened at festivals worldwide. She is currently in post-production on two feature length documentaries, Dear Thirteen and Fire Through Dry Grass. Her work has been funded by Field of Vision, Perspective, Working Films and ITVS. She holds a BA from Brown University and an MA in Media Studies from The New School. 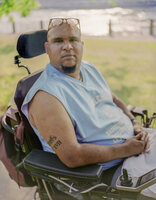 Andres "Jay'' Molina grew up in the Dominican Republic where he played minor league ball. In his late teens he left the D.R. for New York's Lower East Side with dreams of going to college. Jay put school on hold, working twelve-hour days to support himself and his mother. He worked as a truck driver for several years until becoming involved with the drug trade. After serving time in prison, Jay’s plans for a new life were thwarted by a rare lung condition that attacked his vital organs In 2014 the condition took his ability to walk. Today Jay is nourishing a passion for filmmaking and animation, and being of service to and advocating for people living with disabilities. His poetry and writings have been published in NYU’s Literacy Review, The Main Street Wire and Wheeling & Healing: A Poetry Anthology Edited by OPEN DOORS Reality Poets. He’s a recipient of the 2020 NYC Mayor’s Office Safe In The City Grant. 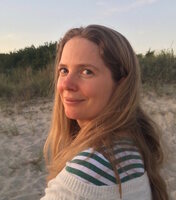 Jennilie Brewster is an artist who works in various forms and in community. Her paintings and installations—inspired by topographical, industrial and mythic landscapes—have been shown in museums and galleries around the country. Her writing on race, place, and trauma has appeared in Catapult, The Rumpus and elsewhere. In 2016 Jennilie launched the arts-and-justice initiative OPEN DOORS—to invest in the creativity and leadership of Black and brown people who use wheelchairs and inspire action for safer, more just communities. As OPEN DOORS Co-Director, Jennilie has led numerous creative collaborations, including a poetry anthology and an original play. In 2019 the New York State Assembly honored Jennilie as a "Woman of Distinction" for her contribution to her community. Currently, she is producing the documentary film Fire Through Dry Grass, which uncovers the devastation experienced by OPEN DOORS members during the pandemic inside a nursing home—and their fight to be seen, heard and survive. The film will be broadcast on PBS.