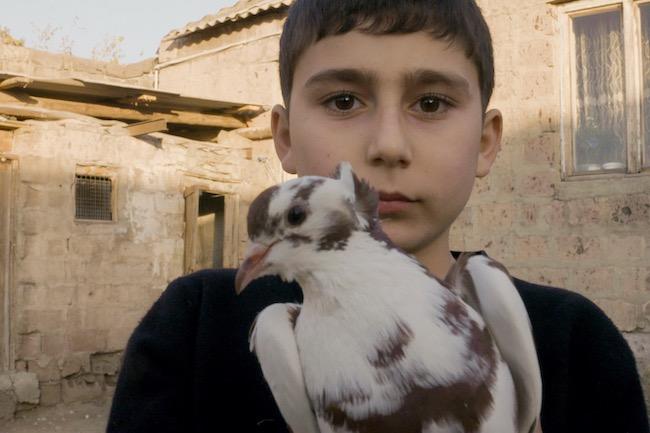 Swinging Fields follows an eleven-year-old boy who was born as a result of a mass wedding in the internationally unrecognized region of Nagorno-Karabakh “Republic of Artsakh” as he journeys back from displacement, into his war torn home. Born in a militarized society, he has a responsibility to protect and prosper his homeland.

Sareen Hairabedian is a documentary filmmaker based between the U.S. and Armenia. She is the founder of HAI Creative, a production company that collaborates with artists and humanitarian organizations across continents. Through her intimate observational shooting style, she captures the untold stories of underrepresented communities. Her subjects range from a modern dancer re-indigenizing his art while learning about his native Hawaiian culture, to Indian women facing extreme challenges of maternal health in Uttar Pradesh, to America’s most vulnerable, navigating life through the pandemic. Hairabedian’s directorial debut We Are Not Done Yet is a 40-minute HBO documentary about U.S. veterans grappling with PTSD who use poetry to process their traumatic pasts. It won Best Documentary at the GI Film Festival and was nominated for Best Documentary Short at the International Documentary Association Awards in 2018. Sareen is currently directing her first feature documentary, a recipient of the IDFA Spotlight Award in 2021.

Azza Hourani is a documentary producer and a fiction assistant director. In 2010, she produced her first feature film in Jordan and in 2011 she obtained her degree in Cinematic Arts. For her producing career, she has been focusing on the regional and international market, producing with institutions such as National Geographic and various non-profit organizations. Currently she is producing two feature documentaries, both have been endorsed by institutions like AFAC, Screen Ireland, Jordan Film Fund and IDFA.

Julie Paratian created Sister Productions with an international, feminist and engaged approach. Sister produced around 30 films including Should the Wind Drop by Nora Martirosyan (Cannes and Acid 2020), You Think the Earth is a Dead Thing by Florence Lazar (IDFA 2019), Into Battle by Ève Duchemin – Magritte for Best Documentary 2016.

David is a BAFTA-winning film producer from Ireland who over the last 20 years has produced many award-winning documentary films for national and international broadcasters. His company, Soilsiú Films, have had their work screened in France, Germany, The Netherlands, Belgium, Finland, the United States, New Zealand, Australia and more. Their most recent film, In Loco Parentis (School Life) premiered at both IDFA and Sundance, and was theatrically released by Magnolia Pictures in the USA, and also released in Australia, France, Netherlands, UK and Ireland.