For besieged civilians, hope and safety lie underground inside the subterranean hospital known as Cave, where pediatrician and managing physician Dr. Amani Ballor and her colleagues Samaher and Dr. Alaa have claimed their rights to work as equals alongside their male counterparts, doing their jobs in a way that would be unthinkable in the oppressively patriarchal culture that exists above.  Following the women as they contend with daily bombardments, chronic supply shortages and the ever-present threat of chemical attack, THE CAVE paints a stirring portrait of courage, resilience and female solidarity.

Screening of film is followed by a moderated post-film conversation with Director Feras Fayyad and a reception at the Landmark Wine Bar. 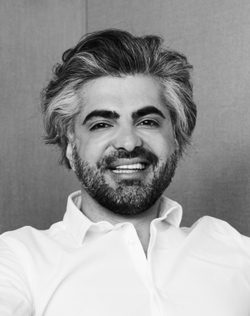 Feras Fayyad is an award-winning filmmaker who has received particular recognition for his work on contemporary Syrian issues and the political transformation of the Arab world.  His most recent film, “Last Men in Aleppo,” earned him a 2018 Academy Award nomination for Best Documentary Feature. The film followed a small group of volunteer rescue workers with the White Helmets civil defense organization.  “Last Men in Aleppo” premiered at the 2017 Sundance Film Festival, where it won the Grand Jury Prize in the World Cinema Documentary competition. It film went on to screen at festivals around the globe and received another 18 international awards, including: Best World Cinema Minneapolis/St. Paul IFF, Audience Award Washington DC IFF, Best World Cinema Sarasota FF, New Talent Award DocsBarcelona, DOX:AWARD - CPH:DOX, Best Film at Docs Against Gravity in Poland and the Inspiration Award Full Frame.

Fayyad was born in Syria in 1984. He holds a BA in Audio-visual Arts and Filmmaking from the international film and television school EICAR in Paris. He has directed and edited several films, both documentaries and fiction. His other films include the feature documentary “My Escape” (2016) and television documentaries “Between the Fighter in Syria” and “Wide Shot-Close Shot.”  He also produced, co-wrote and edited the award-winning short film “One Day in Aleppo” (2017) directed by Ali Alibrahim.