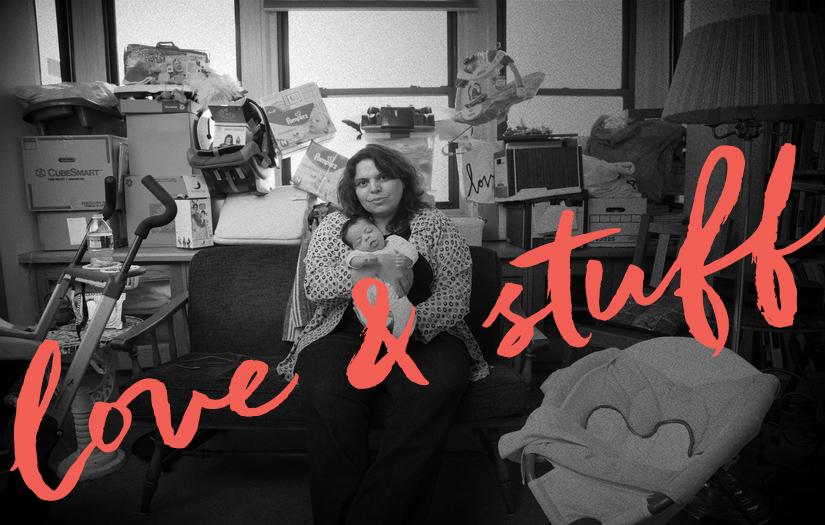 Please join us in NY at DCTV for a spring DocuClub work-in-progress screening  Love & Stuff.

Seven months after helping her terminally ill mother die in home-hospice, filmmaker Judith Helfand becomes a “new old” single mother at 50. Overnight, she’s pushed to deal with her “stuff”: 63 boxes of her parents’ heirlooms overwhelming her office-turned-future-baby’s room, the weight her mother had begged her to lose, and the reality of being a half-century older than her daughter.

Following the screening, we will be joined by Director Judith Helfand and Editors David Cohen & Marina Katz for a moderated feedback discussion led by Lewis Erksine (ACE).

Judith Helfand (Director) is a Peabody Award-winning filmmaker (The Uprising of '34, A Healthy Baby Girl, Blue Vinyl, Everything's Cool) is best known for her ability to take the dark worlds of chemical exposure, corporate malfeasance and environmental injustice and make them personal, highly-charged and even entertaining. A committed field-builder, she co-founded Working Films in 1999 and Chicken & Egg Pictures in 2005. She is currently leading master classes and guest lectures at Columbia and NYU's Schools of Journalism.

David Cohen (Editor) is an editor, writer and filmmaker whose work has screened at SXSW, Hot Docs, DOC NYC, Outfest, Frameline and AFI Docs, been published by The New York Times' Op-Docs, broadcast on PBS' Independent Lens, and received support from ITVS, the MacArthur Foundation and the Sundance Institute. His most recent film as an editor, Love, Gilda (Opening Night, Tribeca Film Festival), was distributed theatrically by Magnolia Pictures and broadcast on CNN.

Marina Katz (Editor) is an editor and filmmaker based in New York. In 2018 her first feature edit, MATANGI / MAYA / M.I.A., premiered at Sundance and won a Special Jury Prize, was in competition at The Berlin Film Festival and opened MoMA's New Directors / New Films. Her latest edit is The Brink, directed by Alison Klayman, premiered at Sundance in 2019 and is currently in theaters.

Lewis Erskine ACE (Moderator) was born Negro in New York City and grew up Black in America. He attended Pitzer College and holds a Bachelor of Arts in Psychology from New York University, College of Arts and Sciences. Listening to music on 1970's Black radio and watching The Alvin Ailey Dance Theatre grow honed his ear and his eye. One of his first jobs was mixing sound for clubs, concerts and records (yes, vinyl). For him, being paid to edit is like being paid to have fun. He has been having this fun since 1985.