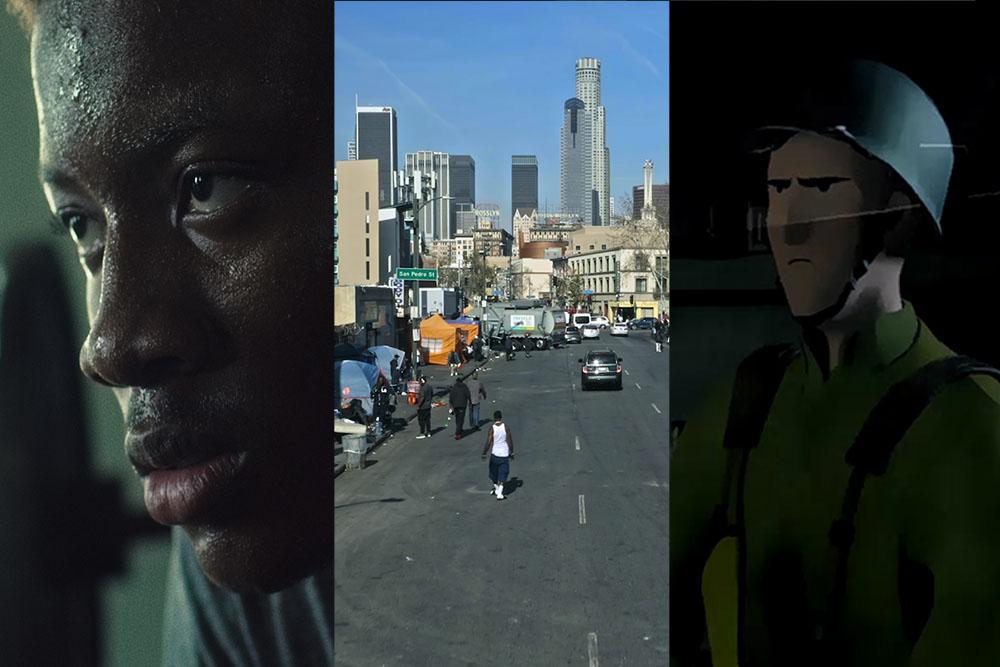 Enjoy a collection of three short films from Netflix:

Audible is a cinematic and immersive coming of age documentary following Maryland School for the Deaf high school athlete Amaree McKenstry and his close friends as they face the pressures of senior year and grappling with the realities of venturing off into the hearing world. Amaree and his teammates take out their frustrations on the football field as they battle to protect an unprecedented winning streak, while coming to terms with the tragic loss of a close friend.

At the height of WWII, a group of young Jewish refugees are sent to a secret POW camp near Washington D.C. The recent refugees soon discover that the prisoners are no other than Hitler’s top scientists. After decades of censorship, this unimaginable story is now finally coming to light through declassified audio recordings and immersive animation. Directed by Daniel Sivan (The Devil Next Door) & Mor Loushy (The Oslo Diaries).

Shot over the course of three years in Los Angeles, San Francisco, and Seattle, this short presents the epidemic of homelessness in America with a show-don’t-tell approach, featuring candid testimonials from those who rest their heads in shelters, tent cities, and anywhere a night’s sleep can be found. A poetic and dignified portrait of our culture’s fraying edges and the people who inhabit them, Lead Me Home is filled with bracing humanity.

This digital screening includes a moderated filmmaker conversation that will be on demand with the film. The Q&A features directors Daniel Sivan, Mor Loushy and Jon Shenk, director and executive producer Matt Ogens and director and editor Pedro Kos, moderated by Jenelle Riley, Editor at Variety.

Matt Ogens is an award-winning filmmaker known for capturing an evocative visual and narrative aesthetic across media including documentary, narrative, and branded content. His breakthrough documentary Confessions of a Superhero premiered at SXSW to critical acclaim, and went on to earn a Primetime Emmy® Award for his ESPN 30 for 30, From Harlem With Love about the Globetrotters. Recent projects include the two-time Emmy®-nominated documentary series Why We Fight, which Ogens created and executive produces, the Emmy®-nominated La Lourve, an augmented reality film directed for RYOT and Huffington Post, and two films for the UFC’s 25 YEARS IN SHORT series which was nominated for an Emmy® Award and won a Clio. His last feature Home + Away, premiered at the Tribeca Film Festival. Matt’s documentary Audible, now on Netflix, is a coming-of-age story told from the perspective of Deaf high school students. The entire film is communicated through sign language.

Daniel Sivan is an Israeli award winning Director/Producer known for his social-political documentaries. His works include the Netflix hit docuseries The Devil Next Door (nominated for the Grierson Award) and HBO’s The Oslo Diaries (Sundance film festival) - that was nominated for an Emmy®.

Mor Loushy is an award-winning Israeli Director and a member of the Academy of Motion Picture Arts and Sciences (Oscar). Her films include Censored Voices (Sundance, Berlin film festival) - winner of the Israeli Oscars® and HBO’s The Oslo Diaries (Sundance film festival) that was nominated for an Emmy®.

Pedro Kos’ latest documentary Rebel Hearts, which he directed, wrote, and edited premiered in the U.S. Documentary Competition at the 2021 Sundance Film Festival and released worldwide by Discovery+. Prior to that he wrote and produced Jehane Noujaim and Karim Amer’s Netflix Original Documentary The Great Hack which premiered at the 2019 Sundance Film Festival and was nominated for a BAFTA award. His feature directorial debut Bending The Arc (co-directed with Kief Davidson) premiered at the 2017 Sundance Film Festival. Previously, he edited Jehane Noujaim’s Academy Award® nominee The Square which earned Pedro an Emmy® Award for Best Editing for a Non-Fiction program, Lucy Walker’s Academy Award® nominee Waste Land and The Crash Reel (2013 SXSW Film Festival Audience Award winner), Jon Shenk’s The Island President (2011 TIFF Documentary People’s Choice Award winner) among others. Pedro is from Brazil and received his B.A. in Theater Directing from Yale University.

Jon Shenk recently co-directed the Emmy® award winning Athelete A with Bonni Cohen. Athelete A (Netflix) premiered at the 2020 Tribeca Film Festival and nominated for two Emmy® Awards. Jon co-directed and photographed An Inconvenient Sequel: Truth To Power (Participant Media/Paramount) which premiered on opening night of the Sundance Film Festival in 2017, was shortlisted for the 2018 Oscars®, and nominated for a 2018 BAFTA for Best Documentary. In 2016, Jon co-directed and photographed the Peabody Award-winning film Audrie & Daisy (Netflix), which premiered in competition at the 2016 Sundance Film Festival. In 2011, Jon directed The Island President (Goldwyn Films), winner of the 2011 TIFF’s People’s Choice Award and IDA’s Pare Lorentz Award. Jon was awarded the 2004 Independent Spirit Award for directing Lost Boys Of Sudan (Shadow Distribution/PBS), served as DP for the 2008 Academy Award®-winning Smile Pinki , and won an Emmy® for Blame Somebody Else (PBS), 2007.