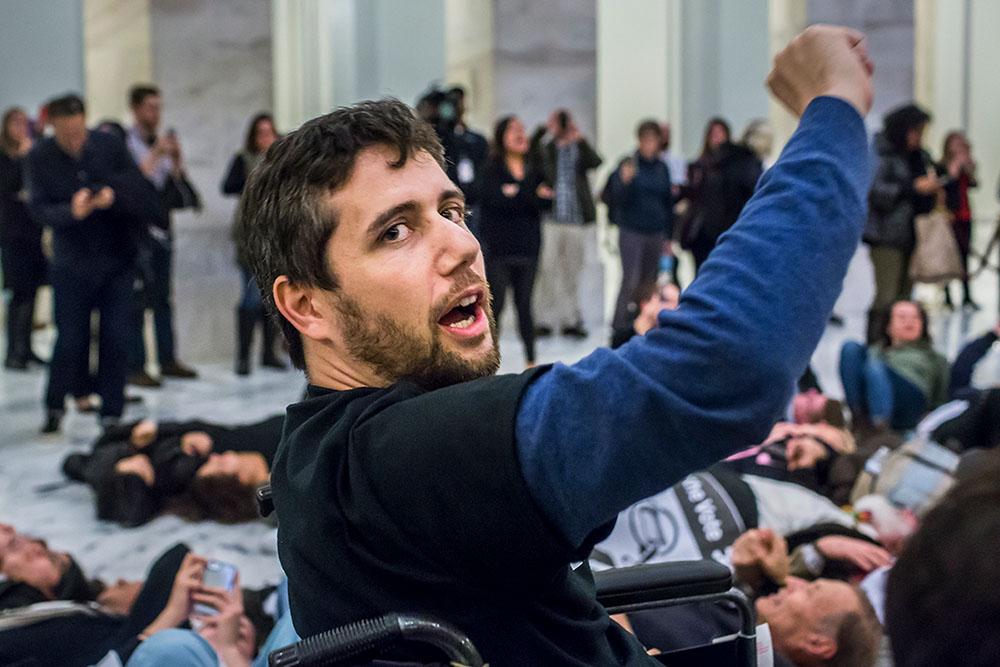 When a young father chances to meet a powerful senator on an airplane, their filmed exchange goes viral and sparks one of the most powerful political movements in a generation.

This digital screening includes a moderated filmmaker conversation that will be on demand with the film. The Q&A features film subject Ady Barkan, executive producer Bradley Whitford, director Nicholas Bruckman and producer Amanda Roddy, moderated by Robert Abele of the LA Times.

Bradley Whitford is an Emmy® Award-winning actor and political activist known best for his role as White House Deputy Chief of Staff Josh Lyman in The West Wing. He has dedicated his activism to speaking out publicly against big business politics, notably at a protest against Scott Walker’s budget repair bill in 2011. In 2007, Bradley was honored as a Champion of Justice by the Alliance for Justice, a progressive judicial advocacy organization. He now serves on the Board of Advisors for Let America Vote, a nonprofit working to end voter suppression across the country.

Nicholas produced the narrative feature Valley of Saints, which won the Sundance Film Festival Audience Award and was nominated for an Independent Spirit Award. He previously directed the feature documentary La Americana, which won numerous festival awards and broadcast worldwide on Nat Geo and PBS. Nicholas is the founder of People’s Television, a NY-based film and commercial production company. Through People’s TV, he directs branded content for clients including Facebook, Airbnb, and Greenpeace.

Amanda is a producer and director with People’s Television, where she has lead projects projects for clients like The DNC, The Elizabeth Warren Campaign, Equal Justice Works, The Nature Conservancy, and The Equity Fund. She wrote, directed and produced the payday lending documentary Bleed Them Dry and is currently producing the feature documentary Not Going Quietly. She previously worked as an associate producer for an Emmy® Award-winning filmmaker in Boston.

Ady Barkan is a social justice activist and cofounder of the Be A Hero PAC, one of the nation's leading health care advocacy organizations. In 2019, Barkan interviewed nearly every leading Democratic candidate for President as part of a groundbreaking series on health care, life, and legacy. In 2018, he and Be A Hero raised over $4 million in small dollar donations against Sen. Susan Collins during the fight over Brett Kavanaugh's appointment to the Supreme Court. Barkan was a law clerk to the Hon. Shira A. Scheindlin in the Southern District of New York and a Liman Fellow with Make the Road New York. He graduated from Yale Law School and Columbia College, and built two programs at the Center for Popular Democracy: Fed Up and Local Progress. He lives with his wife Rachael and their young son Carl in Santa Barbara, California. His book, Eyes to the Wind: A Memoir of Love and Death, Hope and Resistance, was published in September by Atria Books.