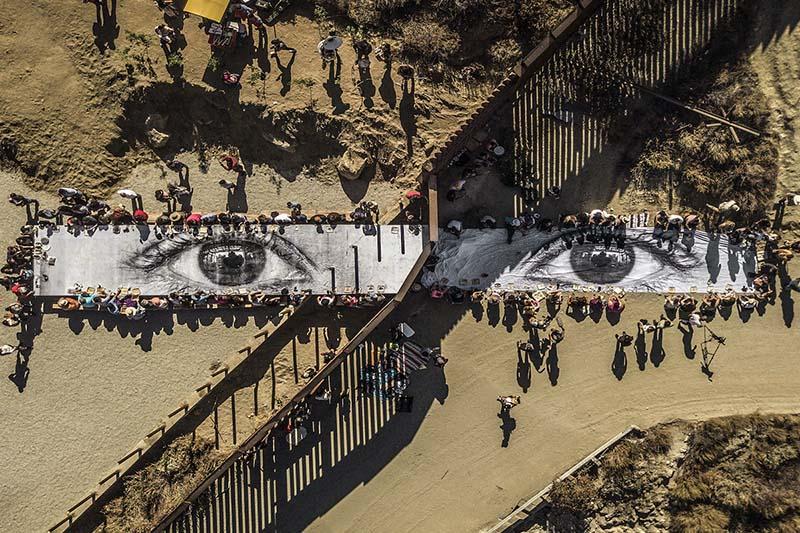 An inside exploration into the work of legendary French artist JR, whose large-scale photographs have covered structures across the globe for almost two decades. Using his projects as a bridge to span our many cultural divides, the film explores art’s greater ability to challenge perspectives and unite communities.

This digital screening includes a moderated filmmaker conversation that will be on demand with the film. The Q&A features film particpant and artist JR, producer Marc Azoulay and Dallas Brennan Rexer and editor Keiko Deguchi, moderated by Shaniqua McClendon, Political Director at Crooked Media.

One of TIME Magazine’s 100 Most Influential People in 2018, JR is a visual artist who exhibits freely in the streets of the world, pasting huge portraits of anonymous people in unexpected places. His work is about raising questions, seeking an encounter between the subject and the passer-by.

A passionate advocate of art since his young days in Paris, Marc became director of Casa Amarela, French artist JR’s cultural center on top of the favela Morro da Providência in Rio de Janeiro. In 2011, JR was awarded the TED Prize and Marc joined him in New York, where they opened a studio and launched the Inside Out Project, the largest global participatory art project. Since then, Marc has been his full-time studio director and main producer of dozens of public art projects, museums exhibitions, short films, books and apps.

Keiko Deguchi is an award winning film editor of more than 50 feature narrative and documentary films combined.  She is a rare editor who is versed in both fiction and documentary, bringing her sense of narrative structure to documentary films and her creative use of footage to narrative films. Keiko was nominated in the best editing category for the 2019 Spirit Award for her work on We The Animals.  Additional narrative films she has edited include Seven Shainberg’s Fur: An Imaginary Portrait of Diane Arbus; Takeshi Fukunaga’s Ainu Mosir; Bette Gordon’s Handsome Harry: and Susan Seidelman’s The Hot Flashes.  Her documentary film credits include award-winning films such as Jeremiah Zagar’s In A Dream,  Jason DaSilva’s When I Walk, Matt Wolf’s Recorder: The Marion Stokes Project, and Ross Kauffman’s TIGERLAND.