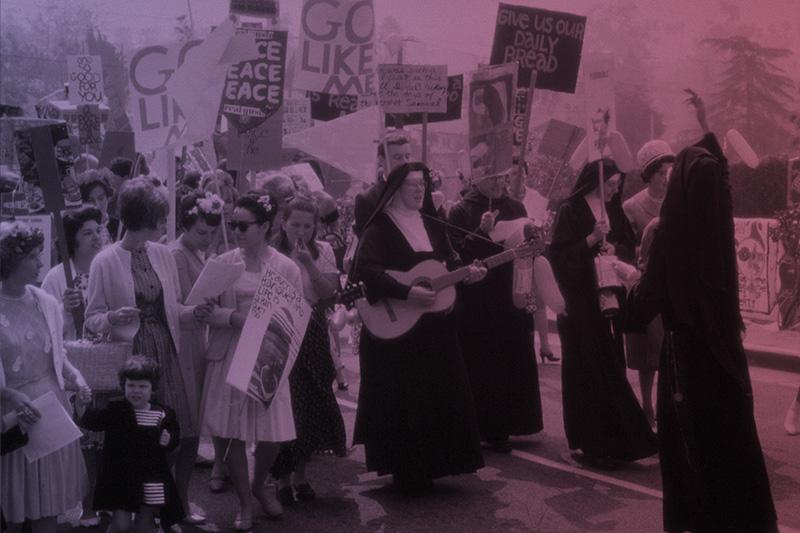 In 1960s Los Angeles, The Sisters of the Immaculate Heart of Mary fought for equality, their livelihoods, and freedom against an all-powerful Cardinal who sought to keep them in their place. Their bold acts of faith, defiance and activism turned the church upside down, helping to reshape our society in ways that continue to resonate today. Pedro Kos’s Rebel Hearts combines two decades of never-before-seen incredible archival footage and stunning animation to beautifully illustrate the story of these incredible women.

Rosa Manriquez is a third generation Latinx mother and grandmother from East Los Angeles. A lifelong Catholic, she was educated by the IHMs from first grade through college and holds an M.A. in Theology. Rosa has been part of the Immaculate Heart Assembly Planning Committee, the Invitation and Program Committee, and is part of the Commission on Justice for Immigrants and Refugees and the Antiracism Task Force. Rosa is an ordained Roman Catholic priest and a member of Roman Catholic Womenpriest. She is a celebrant for Holy Wisdom Catholic Community and is part of the Good Troublemakers, an antiracism committee. Through A La Familia, part of the HRC, Rosa was a speaker concerning the intersection of familia, religion and the LGBTQ community. Rosa’s focus is service to the LGBTQ community and people of color. Her passion is her familia: her daughters, their wives, and her grandchildren.

Shawnee Isaac-Smith earned a master’s degree in Film, Media & Theatre Arts from UCLA. Following her passion for documentary films and storytelling she has traveled to Burma to film the war atrocities committed in the Shan State and has chronicled the lives of AIDs orphans in Cambodia. Twenty years ago, she began filming the lives and work of the Sisters of the Immaculate, women who exemplify a modern day hero’s journey, and lives she and her team are excited to share with you today.