Nowhere is the worldwide erosion of democracy, fueled by social media disinformation campaigns, more starkly evident than in the authoritarian regime of Philippine President Rodrigo Duterte. Journalist Maria Ressa places the tools of the free press—and her freedom—on the line in defense of truth and democracy. 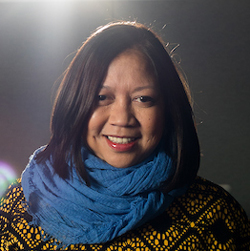 Ramona S. Diaz is an award-winning Asian American filmmaker whose films have screened at Sundance, the Berlinale, Tribeca, the Viennale, IDFA, and many other top-tier film festivals. All of Ramona's feature-length films—IMELDA, THE LEARNING, DON’T STOP BELIEVIN’: EVERYMAN’S JOURNEY and MOTHERLAND —have been broadcast on PBS. Her current film A THOUSAND CUTS has been nominated for a Gotham Award for Best Documentary Feature and is currently playing in virtual cinemas. Ramona has been nominated for an Independent Spirit Award, a Peabody Award, and a Gaward Urian Award from the Filipino Film Critics. She received a prestigious Guggenheim Fellowship and was inducted into the Academy of Motion Picture Arts & Sciences (AMPAS) in 2016, and in 2017 received a Women at Sundance Fellowship and a Chicken & Egg Pictures Breakthrough Filmmaker Award. Ramona is a graduate of Emerson College and holds an MA from Stanford University.

A journalist for nearly 35 years, Maria Ressa co-founded Rappler, the top digital only news site that is leading the fight for press freedom in the Philippines. As Rappler's executive editor and CEO, Maria has endured constant political harassment and arrests by the Duterte government. For her courage and work on disinformation, Maria was named Time Magazine’s 2018 Person of the Year, was among its 100 Most Influential People of 2019, and has also been named one of Time's Most Influential Women of the Century. Recently, Maria and her team at Rappler were awarded the Truth to Power Award from the International Documentary Association.