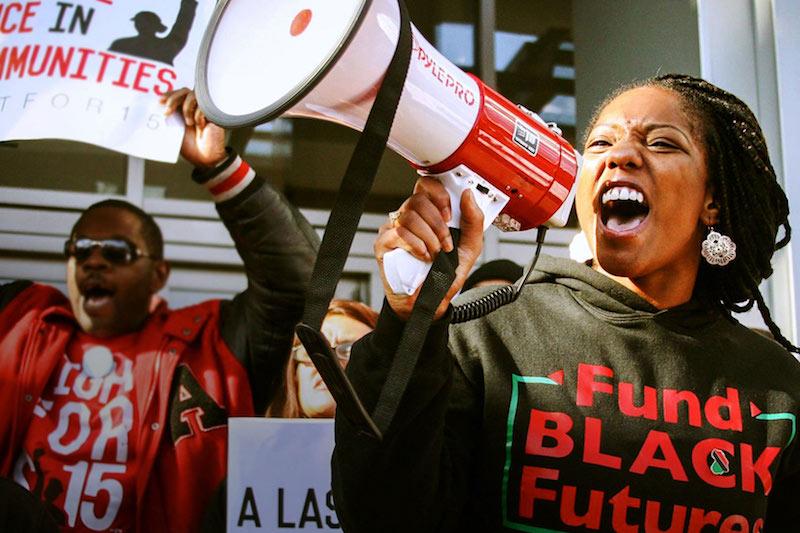 After two Black Chicagoans are killed, millennial organizers challenge an administration complicit in state violence against its residents. Told through the lens of Janaé and Bella, two fierce abolitionist leaders, Unapologetic is a deep look into the Movement for Black Lives, from the police murder of Rekia Boyd to the election of Mayor Lori Lightfoot.

Ashley O’Shay is a DP and producer based in Chicago, IL, whose work focuses on illuminating marginalized voices. She has produced work for national brands, including Lifetime, Ford Motor Company, Boost Mobile, KQED, and Dr. Martens. Most recently, she filmed the final episode of Dr. Martens' "Tough As You" series, starring the band Phony Ppl, accruing over 65K views on social and web. In 2019, she co-produced the Chicago episode of KQED’s award-winning series “If Cities Could Dance,” which became one of their most viewed episodes to date. Her work also appeared in the critically-acclaimed Lifetime docuseries Surviving R. Kelly. Although she has crafted many short films, Unapologetic is her first venture into the feature world. She was recently featured in New City’s Film 50 “Screen Gems” of Chicago.

Morgan Elise Johnson is an independent filmmaker and publisher. Her documentary career was born at Northwestern University, and nurtured by Kartemquin Films' internship program. She grew to become a staff producer with Milwaukee-based 371 Productions. There she produced and co-directed the PBS/WORLD CHANNEL documentary There Are Jews Here, which premiered at the San Francisco Jewish Film Festival in 2015 and then toured for two years before its national PBS/World Channel broadcast. She also associate produced a Virtual Reality documentary about abortion clinic harassment called Across the Line which premiered at Sundance Film Festival’s New Frontiers exhibit. Her life and career evolved when she left 371 in 2016 and co-created The TRiiBE (thetriibe.com), a digital publication and production company dedicated to reshaping the narrative of Black Chicago, which has earned Morgan a spot on Forbes’ 30 Under 30 Media Class of 2019 and NewCity’s Film 50 list.