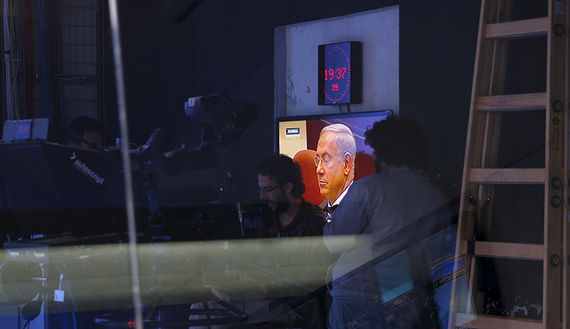 This delay raises enormous questions about the future of public broadcasting in Israel. It now seems that as long as Netanyahu is prime minister and communications minister, public broadcasting will continue to be pummeled and eventually lose its relevance. It was apparently naive to believe that an independent broadcasting network would be established in Israel while Netanyahu is the country’s leader. The fact is that as soon as the first indications emerged that the new corporation was a professional organization whose directors had no commitment to the prime minister and his agenda, Netanyahu delivered it a deathblow.

Matt Turner of Little White Lies reports on two standout documentaries from Mexico, where 70% of last year's docs were made by female directors.

When thinking about why young Mexican women are making so many great documentaries, Huezo explained that effective documentary filmmaking lets viewers “see the reality in which they are immersed.” Both her film and García’s find remarkable ways to portray deeply sensitive situations, subtly excising the traumas their characters experience without imposing it polemically. “If you are able to identify with the characters, documentary has the power to involve you with their experience.” Both Tempestad and Kings of Nowhere do precisely this, managing to make stylised, formally expressive films without sacrificing any of the empathy that their subject’s demand.

Indiewire shares the news that every feature in competition at Michael Moore's Traverse City Film Festival is directed by a woman.

"Every film in our Official Selection (US), fiction and nonfiction, is directed or co-directed by a woman," Moore told IndieWire in an email. "And they’re all incredible movies. As an expression of tokenism usually reserved for women, I am bringing five films by American men in a sidebar called, 'Men Make Movies — The Struggle Continues.'" There are other movies in the lineup directed by men, of course, whether foreign or classic.

At The Guardian, Ashley Clark considers the artistic merit of the notoriously grotesque Mondo movies, or "shockumentaries."

One of Mondo’s hallmarks was its unsettling blurring of fact and fiction – an approach that makes the films hard to know how to respond to, and often landed its creators in hot water. For example, Jacopetti and Prosperi’s tellingly titled Africa Blood and Guts (1966) took as its subject the violent end of colonialism in a variety of African territories in the 1960s. Prior to its release, allegations arose that a scene depicting the execution of a Congolese Simba Rebel had been staged for the camera. Jacopetti was arrested on charges of murder and footage was seized by police. He was only acquitted after he and Prosperi provided documents proving they’d arrived at the scene just before the execution took place.

Behold the world of American politics, mashed to a dreary paste. (The men, needless to say, are white.) The film, then, contracts into a study of the morphology of the political class: By the end, you find you’ve developed an eye and ear for the miniscule distinctions, the exquisite taxonomical gradations, in accent, style, grain of voice—as Johnson, Kennedy, J.K. Galbraith, Arthur Miller, and McCarthy himself wriggle around within the same stifling phenotype. So this is what power used to look like: a pomaded, Windsor-knotted, smugly smiling masculinity.

"Imagine being able to enjoy documentaries in small and large places from Oaxaca, Mexico City and Tijuana to Norway, Spain and Tanzania. Well, there is a touring festival of about 50 documentaries that travels around many cities in one country, as well as to other continents. The festival is called Ambulante Gira de Documentales, or Traveling Documentaries. Although the organizers don't credit themselves as pioneers in this model of festival, they are one of a kind. As executive director Elena Fortes puts it, 'I wouldn't say that we started it, but I do think that it was new for a lot of people in other countries. I knew that there were a lot of traveling showcases for a very long time.'"