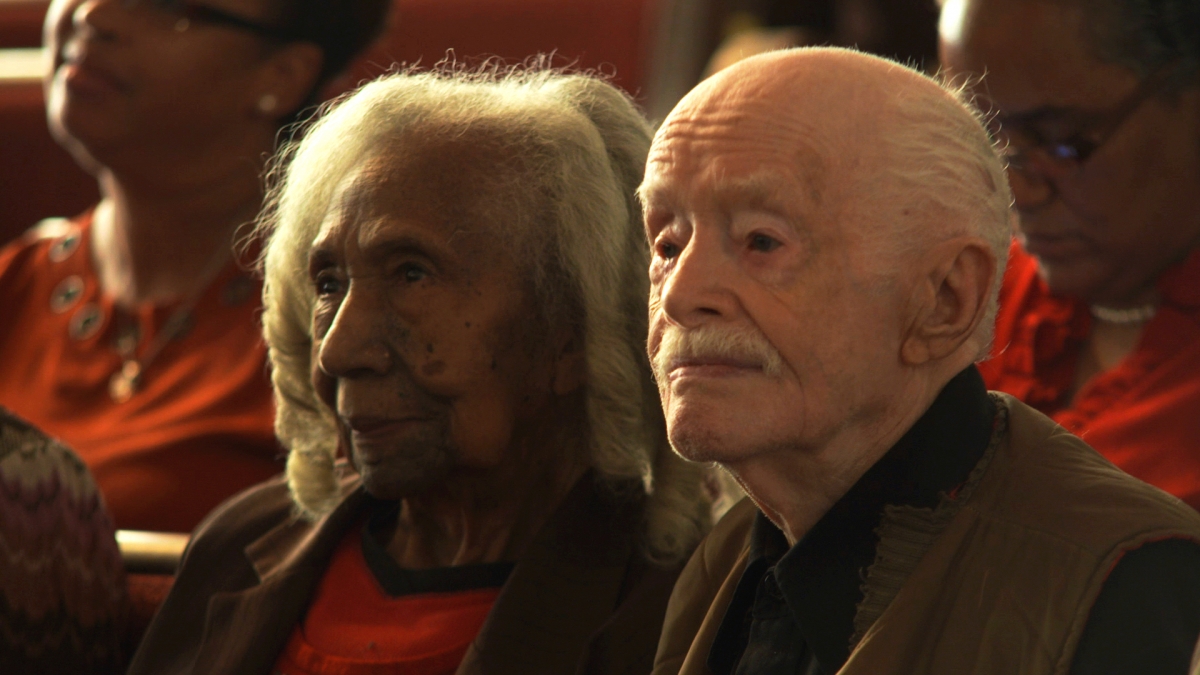 For journalist-turned-filmmaker Laura Checkoway, Edith + Eddie was supposed to be a heartwarming love story. Inspired by a photograph she saw online, Checkoway traveled to Alexandria, Virginia to profile America's oldest interracial newlyweds, aged 96 and 95, who married after ten years together. However, the story took a turn when the happy couple was forcibly separated by a court order, mandating that Edith go live with her daughter in Florida.

In the year since the short film's premiere at the 2017 True/False Film Festival, Edith + Eddie has inspired and infuriated audiences, introducing us to an unforgettable pair of star-crossed lovers, as well as the abuses of the elder care system. Edith + Eddie won the IDA Documentary Award for Best Short Documentary, and it's one of the five nominees for the Academy Award.

Documentary spoke to Checkoway on the phone from Los Angeles, where she had just attended the Oscar nominees luncheon.

This is your second film. Can you tell me a little bit about your journey towards filmmaking? I know that it's not your first career.

Laura Checkoway: Yeah, I was a journalist and a writer and I wrote for magazines. I worked for entertainment magazines and I always got assignments. The first story that I followed on my own was about a young woman named Lucky, which was initially printed as a photo essay in a magazine. I met her in the streets of New York around ten years ago, and I started following her and a number of other girls. When the magazine piece was printed, it was the first time that I felt really strongly like this is just an introduction and there was so much more to learn. I really wanted her to be able to speak for herself, so the article developed into a documentary and I wound up following her for about six years. That was my first film. That was my film school because I hadn't studied film and I actually hadn't studied journalism either, so I've mostly learned through experience so far.

Was that a steep learning curve, or did you have collaborators? What was that learning process like?

It was steep, and it continues to be. Yeah, I've worked really bare bones so far. I shot a lot of the Lucky film and I had a number of really talented people who were willing to work on it as their passion project. With both films it's typically me and one cameraperson. With Lucky, because it took so long and [because of] the nature of the process, I wound up filming a lot of it as well. It is steep and at the same time I realized all along the way that documentary filmmaking was the perfect way to use a number of my skills.

So when you first decided to make a film about Edith and Eddie, what was the film you thought you were making?

I was fresh off the heels of Lucky, which was a really tough story. When I entered into Edith + Eddie and was on my way to meet them, I felt that this would be a refreshing love story and that there seemed to be a lot of tenderness between them. So I was really looking to capture love at that time in life and what it must feel like to fall in love at that time and really, what it feels like to fall in love at any time. Also, both of them had lived through so much history—almost a hundred years. So I thought it would be a look at love and living on your own terms; it just turned into a much darker look than I had initially anticipated.

How long had you been filming that before it became clear that something else was going on?

It was pretty soon when we found out that there was disagreement between Edith's daughters about what was best for their mom. We did not know what would unfold, literally, until it did.

When we witness a really dramatic turning point, it really just unfolds before our eyes. The legal guardianship system was not on my radar before making this film, and so we learn that Edith's rights have been put in the hands of someone who is appointed by the court who doesn't know her. And the issues that arise when that happens are something that plays out before us again in the film. Then I began researching, and I couldn't understand how this could be. A lot of audience members leave the film asking, How on earth could this happen? They come to find out that this is happening to elders all across the country.

Right. And this isn't the film that's explaining this whole process. There are articles, and I think there was a good one in The New Yorker this past year about a similar situation.

Yes, and it was wonderful when that came out, because it really contextualized the bigger issue. Then audience members, having read that, are able to get a better grasp of the bigger picture of what's going on.

You can sense in the film that it really doesn't want to go in that direction. Your film ends, not on a note of what would be very justified fury, but with a kind of calm contentment with Edith and Eddie together on the shore. How did you make that decision?

I told Steve James, who's an executive producer on both of my films so far and a mentor to me, "Steve, we found out that this is happening all over." He agreed with keeping it close with the love story; that's where the real power is. As you said, there are other films to be made and articles to be read about the bigger issue. I set out to make a love story, to capture this love story. And that's what I stuck with. Also, I wanted the film to be pure and true to this couple during the time that we knew them and got to spend with them.

Did you always know this was a short film, or was that something that you discovered in the editing room?

Discovered in the editing room. I find that in editing, there's a lot of crafting to do and then there's a certain point at which the story wants to be told a certain way and almost demands it within the edit.

You mentioned Steve James' involvement. Was Kartemquin Films involved in this project from the get-go?

They weren't. Steve was, by way of being someone I ask advice from. Then he brought me into the fold at Kartemquin. We thought we were still in production at that time, only to find out that actually we already had our film. So they broke their mold with us; usually I think they work throughout an entire production. So they were just really taken with the story and they came on to help us to start to submit to festivals and get it out there.

Can you talk about Cher’s relationship to the project and how she came on board and supported the film?

There's a news clip you see in the film, talking about the couple's marriage being threatened. Cher saw that on the news at home in Malibu and she was very moved by it, and so she wanted to know how she could help. She connected with the family and hired a lawyer to represent Rebecca and Edith in order to honor Edith's wishes to stay in her home. She wasn't seeking publicity; this was just something out of the generosity of who she is. She got involved behind the scenes and then she and I bonded and kept that connection going.

What would an Oscar win mean to you and to your subjects and their families?

This level of recognition for the film, and even more so for elders all over, we feel like it has the potential to save millions of families. I think that we so often look the other way from older people, and that makes it that much more important to look and experience as deeply as possible with them.

Edith and Eddie would wake up in the morning and there was such sweetness between them and the way that they cared for each other. You realize that that feeling is the same throughout your life. When you have someone, whether new, or for a long time, but that just lights you up like that, whether you're a teenager or an adult or an older adult, it's just so beautiful to realize that that feeling remains the same.

Edith + Eddie screens at IDA's DocuDay on March 3 at 3:30 p.m. at the WGA Theater in Beverly Hills.