It's All True 2017: A Conversation with Festival Founder Amir Labaki 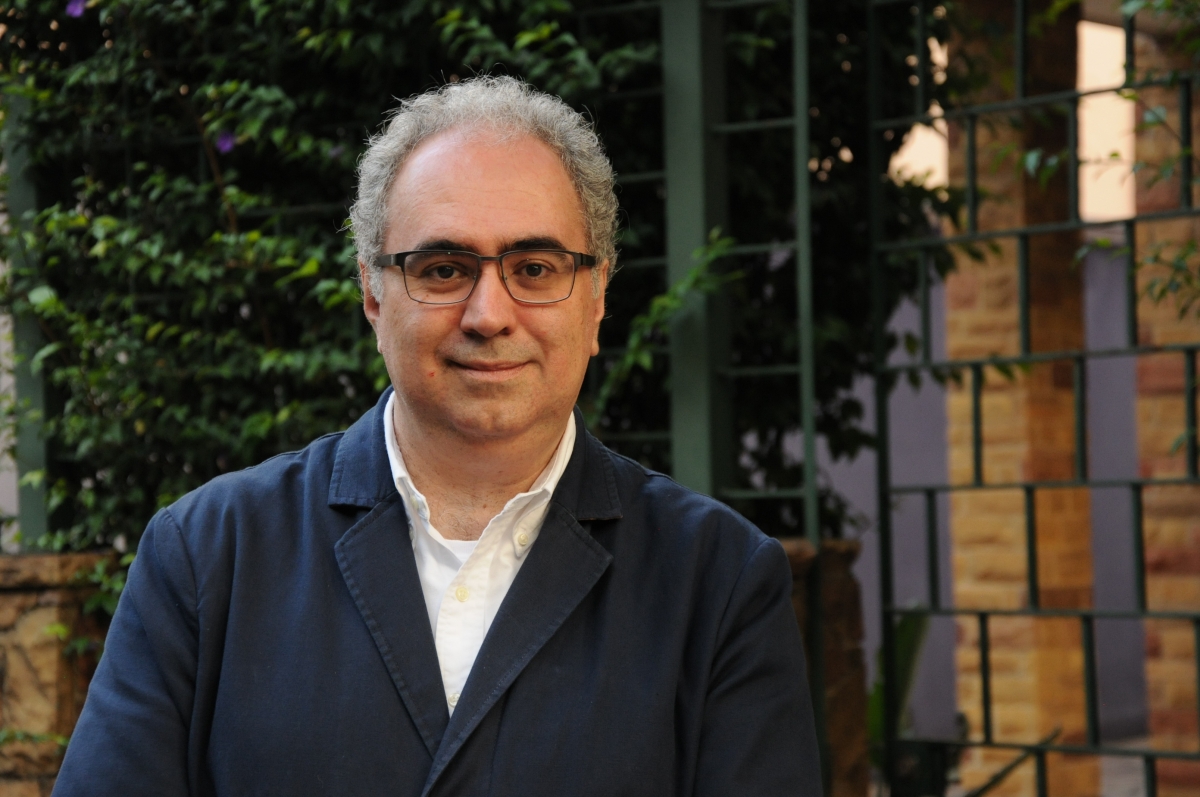 The It's All True Festival, Brazil's first documentary film festival, introduces a new variety of short and feature-length productions selected from recent titles of national and international filmmakers. Simultaneously taking place in São Paulo and Rio de Janeiro, the 22nd edition of the festival opened April 19 and continues through April 30, and is one of the few cultural events that doesn't seem to have been severely affected by the crises faced by the country over the last few years.

That the festival has survived and even thrived is attributable to its two decades on the cinematic landscape and its well-established relationships with its sponsors, said It's All True founder/director Amir Labaki during a press conference before the festival. In a modern art-house theater in São Paulo, he announced this year's programming, which includes over 82 films from 30 countries - 16 of them world premieres - as well as a retrospective of historic Soviet productions and the opening screenings for all competition categories. Matthew Heineman's City of Ghosts opened in São Paulo, while Lúcia Veríssimo's Eu, Meu Pai e os Cariocas [Me, My Father and the Cariocas], about a legendary Brazilian band, premiered in Rio.

Documentary spoke with Labaki just prior to the festival's opening about some of the challenges involved in producing nonfiction cinema in Brazil, how filmmakers and film festivals are managing to survive a national crisis, and what's necessary to maintain It's All True’s preeminence in an increasingly competitive festival scene in Latin America.

How was the process of launching the first documentary film festival in Brazil?

The idea for a film festival dedicated exclusively to nonfiction narratives was conceived in 1995. It was very obvious to me at the time that documentary production was evolving and obtaining new energy, but still not hitting national screens as it should. It was impossible for viewers to notice that evolution, so it seemed to me that a specific event featuring documentary films would be an exciting project to bring to the country.

I was optimistic about its success, [given] that we already had a strong documentary tradition nationwide, but also because the digital revolution was beginning to have an impact on the aesthetics introduced in recent documentaries. That was especially true for feature-length documentary films, so the number of new productions and releases started to increase all over the world. And in spite of some sharp moments of crisis confronted by the fictional film industry, these circumstances were not as common in the documentary community, which had always been a very prominent one in Brazil. Then in '96, we opened a small first edition of the festival, with less than 30 movies that year, and it was a great success with the audience and the critics as well.

How was the film festival scene in Latin America?

We usually had some of the most relevant Brazilian documentaries exhibited yearly in the city of Havana [Havana Film Festival], but it was difficult to get a sense of where our filmmakers were standing, how far they had tried to go until then, and what really was the current status of nonfiction filmmaking in our nation. Previous efforts to start a Latin American festival had been made in smaller screenings and special events located in Argentina and Chile, but It's All True remains the oldest festival that only features documentaries in the region on a regular basis. In the Americas, this is considered a pioneering, successful experience.

Why did you decide to simultaneously present the festival in two cities?

To immediately establish itself as part of the national cultural scene, I always believed that the festival needed to happen simultaneously in São Paulo and Rio de Janeiro; both cities are known as huge cultural centers in the country, so that's what we did from the beginning. Back then, I had already worked as a film critic for at least ten years, covering the film industry in Brazil and abroad, which made me realize the importance of positioning a festival in multiple cities and capitals whenever possible. That is also why every year the festival travels to new locations right after the leading events in São Paulo and Rio - an initiative that has been part of our calendar since the first edition as well. This year, for example, we’re traveling to Brasília and Porto Alegre.

Besides that, there's a weekly cable TV program named after the festival that has been going on for 13 years. It became an opportunity to go far beyond our early mission, and it was an extra window for me, as host and curator of every episode, to present and analyze the most recent documentary productions throughout the year.

What are some of the recurring subjects addressed in this year's programming?

There are no main topics, I guess, but international productions have vastly depicted the Syrian civil war, with most of these films released in the last six or eight months. So this category has reached its peak, and that's why we chose City of Ghosts for the opening in São Paulo. The War Show, also one of the titles included in our international competition, reveals the beginning of the war and connects it to the events of the Arab Spring. It's a topic that indicates a very striking moment in world history, and that can be perceived in this year's nonfiction production.

And what about Brazilian titles?

I don't see a particular issue being approached by a majority of Brazilian filmmakers right now, but for the last ten years, our notion regarding the documentary form has been widely reshaped. A reinvention in feature-length films, you could say, with all those different styles of narratives being scrutinized while creating new identities to the documentary industry in Brazil.

Is this diversity a common aspect of the festival structure?

It's what we've been looking for. We aim to be a relevant portrait of what's considered a creative documentary process and we're especially interested in films that bring an authorial point of view, an investigative style.

How do you coordinate your work dynamic when traveling abroad to attend other festivals and choose some of the titles that will be part of It's All True's lineup?

Once the festival is over, preparations for the next edition start almost immediately. In order to watch movies and make new connections, I try to visit at least two or three of the leading film events that are set to happen throughout the year. I always go to Amsterdam's International Documentary Film Festival [IDFA] and, of course, Cannes - the most important international film festival, increasingly open to documentaries. IDFA is the main documentary festival on the planet, so it's essential for me to be there. And then I try to pick the third festival, sometimes [Dok] Leipzig, sometimes Denmark's CPH:DOX, or maybe another Latin American festival.

How does It's All True position itself among other festivals in South America? Does the festival promote any relations with these events?

Not institutionally. We have no official partnerships with other festivals. But I've had the honor to be part of many of these festivals before, and we also have members representing It's All True more often than not in several countries like Argentina, Chile and Cuba. We also have a Europe representative, Anna Glogowski, who lives in Paris and visits festivals nearby very often. So we don't have a formal connection with these organizations, but we stay in touch quite often.

How is the festival surviving amid a national recession?

We were privileged to quickly grow strong as a festival when we began, so we gained significant legitimacy in the country. Over these 22 years, we've been through a great number of political and economic crises in Brazil, but this wasn't the trickiest year for It's All True, mostly because of its tradition and for its well-established relationships with our partners and sponsors, who are both very familiar with our intentions and needs, and consider all possible obstacles as if it were their own. These institutions are deeply connected to the festival all year long, and I think that’s the reason why we’re not very affected by this national recession, which is probably the worst in our country’s history.

But maybe this is one of the worst years for those who make documentaries, which proves how amazing and talented these people are. And I don't remember seeing such a remarkable amount of projects financially supported by crowdfunding organizations like I see it these days, which is a comprehensible consequence in the independent film landscape.

What’s necessary for It’s All True to stay relevant in an increasingly competitive festival landscape?

Choosing great films. Taking into account the film's magnitude to the audience is a pivotal standard, a necessary one if you intend to keep things interesting, and considering what’s relevant to the public will certainly make the festival a more relevant one as well.

Do you hope to see new technologies, such as VR documentaries, becoming a part of the festival's infrastructure anytime soon?

We're introducing a virtual reality project for this edition already, with the first VR film about a Brazilian tribe. Fogo na Floresta [Fire in the Forest] was directed by Tadeu Jungle, and its world premiere will happen at this year's festival. We're still an "on-screen" festival, though, so I'm more interested in things we can watch sitting in a traditional movie theater, but new audiovisual experiences are something I like to be aware of, and they're part of what I consider meaningful to our audience.

Humberto Abdo is a freelance reporter based in São Paulo, Brazil; he writes about film and technology for print and electronic media.

END_OF_DOCUMENT_TOKEN_TO_BE_REPLACED

It's All True: Brazil as Sci-Fi Dystopia in 'Manda Bala'

Brazil a Global Force in Documentary? It's All True

Elegies and Excavations: Reassessing the Past at Brazil's It's All True Documentary Festival