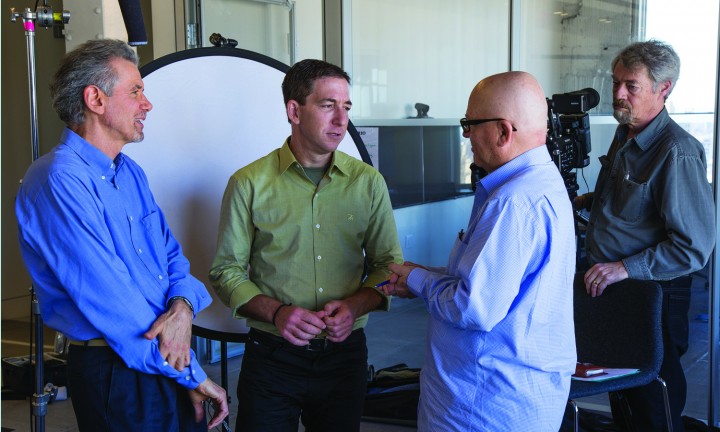 At Columbia Journalism Review, Judith Matloff reports on the legal challenges that documentary filmmakers may face in the Trump era.

Documentary filmmakers tend to gravitate towards topics like whistleblowers and corruption, which make them vulnerable to legal action. They are more exposed than reporters, because they typically lack affiliation with large media organizations and their legal teams. They don’t have unions, and they generally work alone, relying on savings and small grants until a film is finished. In the past, filmmakers entered into a partnership with broadcasters at the start of production, but now they are generally out on a financial limb until the film is done, a model that affords no protection.

At POV Magazine, Daniel Glassman considers the future of journalism alongside the new doc All Governments Lie.

The sort of passion that those political candidates have inspired in their followers is similar to that of the independent journalists that All Governments Lie celebrates. The sense in all cases is that the truth is not being told and that it needs to be told. Such dedication goes beyond the norms for political involvement and employment. Peabody ends our conversation by quoting Jeremy Scahill's acceptance speech for the Izzy Award. "'This is not a career; it’s not a profession: journalism is a way of life,'" he says. "That really resonated with me."

At Deadline, David Robb tells the story of the late cinematographer Haskell Wexler's battle against the Cinematographer's Guild.

His crime – for which he could be kicked out of the union he'd belonged to for more than 60 years – was that he'd posted the proceedings of a union membership meeting on an unlisted YouTube account, meaning that only those who knew the account could view it. The video had been shot by the Cinematographers Guild, and streamed live for its members to see. Wexler, however, was accused of making it available for anyone to see – including employers – which was against the union's constitution and bylaws.

At POV, Eileen Meyer concludes her series of conversations about documentary editing with editor Aaron Wickenden.

"If you think about it, all documentaries are archival films because they all traffic in using documentation of the past. So for me a doc like Weiner is as much an archival film as a film like Amy. In the former, the directors generated the materials and in the latter the director licensed the materials. But it's all the past. The goal of both films and all films I love is to use these collected relics to transport the audience towards feelings of immediacy and intimacy with the subject. We want to evoke for the viewer the same feeling you have when you're in the midst of a deep discussion with your best friend. That feeling you have when you are in the moment. How to achieve that is the real trick of the trade.

"Documentaries are the voice and the conscience of the people," Wexler says. "When I hear someone say they are making a film because someone at a network likes that subject, it leaves me cold. You have to trust your gut instincts and what's in your heart to tell meaningful stories; that's what makes it an art."

Netflix Has 30 Original Series Today, Will Double That in 2017
read more

END_OF_DOCUMENT_TOKEN_TO_BE_REPLACED

Statement in Support of #RightToRecord