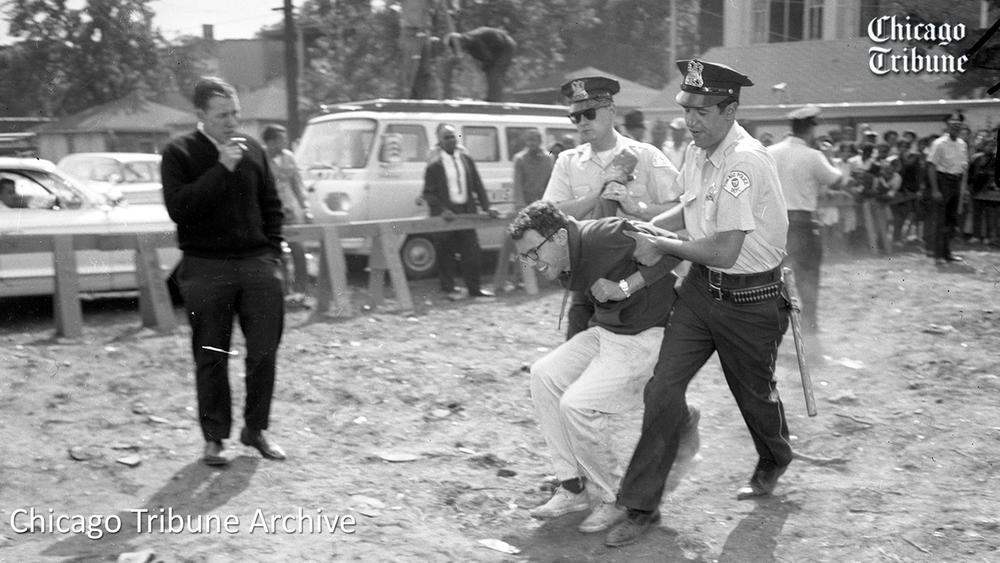 At Indiewire, Kartemquin filmmakers Gordon Quinn and Rachel Dickson discuss how they discovered footage of Bernie Sanders getting arrested:

Quinn: I was in the same graduating class as Bernie Sanders at the University of Chicago. A few months ago when a photo taken by Danny Lyon of our sit-in at the university President's office was posted showing Sanders speaking, a controversy arose as to whether it was him or not. We were protesting the university’s discrimination against its own black students in housing that it owned. I remember Danny Lyon taking pictures at the sit-in and he said he was sure it was Sanders, but we had no idea that he might be in our footage from 73rd and Lowe. Dickson: Recently, a friend of Jerry Temaner’s sent him an old [Chicago] Tribune article which names Bernard Sanders as someone arrested at the protest at 73rd and Lowe. Jerry contacted us and I began to look through our footage. Quinn: I then found my old University of Chicago yearbook from 1964 and it has a picture of Sanders. Seeing that, we were pretty sure it was him in the video.

From Filmmaker, Esther Robinson presents an action plan for what we need to do as a filmmaking community to bring about true diversity and representation—from funding to promotion to personnel:

"In terms of the hard numbers, what gets supported (funded, made, screened and promoted), often even within the nonprofit system (a system set up to support public good), is predominantly white and male. And sometimes you don’t even need data; you just need eyes. Our eyes can show us that in aggregate, the decision-makers are predominantly white, and they are, more often than not, male. Take a look at event photos from any industry magazine (even this one!) and you’ll get a snapshot of how we’ve failed to achieve diversity in this regard."

The New York Times Magazine's Mattathias Schwartz teases out the relationship between the (T)error filmmakers Lyric Cabral and David Felix Sutcliffe and their informant subject:

Cabral was familiar with the thorny moral problems that sometimes arose in her profession -- the "awkward dance," she now calls it, between reporter and subject and their conflicting expectations of how the story should be told. The story that Cabral chose to tell about Torres is very different from the one he tells about himself. [...] By some counts, nearly half of the 500-plus terrorism-related convictions in federal court since the Sept. 11 attacks have involved informants. Before (T)error, most of what was known of their work came from indictments and snippets of wiretapped dialogue, served up by prosecutors and neatly presented for the courtroom. Filmed without the F.B.I.'s cooperation and apparently without its knowledge, (T)error shows how an informant puts a case together from its raw ingredients. [...] When Cabral and Sutcliffe screened (T)error for Torres, he gave it four and a half out of five stars, complaining that he came across as too depressed. Cabral pointed out to him that the film is bookended by two moments of happiness. At the beginning, he's in the kitchen frosting a cake with his son. At the end, the F.B.I. has offered him a new assignment, though it would eventually fall through. In that conversation, Cabral was trying to show Torres that it was his work with the F.B.I. that was making him unhappy. "Informants don't get to reflect," she told me later.

At Forbes, games and technology writer Andy Robertson takes a look at Thank You For Playing and the video game made about childhood cancer:

It’s true, games are still largely consider as sites of entertainment rather than education or reflection. Whether they are really art or not is still up for debate in many quarters. "The film is about the role that art plays in our lives," Malika reflected. "About a video-game challenging the boundaries of what games can be and do. But ultimately it examines why we as humans have art so central to our lives, a way to express and explore some of the most difficult experiences in our lives." For me this is why the film and the game are so fascinating. They both avoid being overly pleased with the novelty of what they have created and move on to reflect more deeply on what these new experiences may mean for broader human existence. Games offer new ways to make sense of the world, both its joys and its pain. David wants to refine that definition though. "It's more an invitation to think about the way we go through the process of grief and how art is a proxy, and has been through history, to deal with the things that are impossible to deal with through life."

Again at Indiewire, the directors of The Thin Blue Line and The Look of Silence converse about their common ground:

JOSH OPPENHEIMER: What I did in my films, what motivates this work (and I think something similar motivates you) is a sense that you have systemic impunity and you have systemic violation of the law, and then you have a need to— ERROL MORRIS: Do you know how I would describe you? You see a situation where there has been something that is horrendously unjust and morally disturbing to you as a person. And you say to yourself — I'm speaking for myself, in part — you say to yourself, "What can I do to tell this story and what can I do to possibly redress this injustice?" JO: That's absolutely right. Someone asked me, "What motivates you?" And I said, "Well, I think for me the thing that most vexes me and demands my undivided attention is when not only has there been an injustice, but then there is pretense, there's a lie. There is an immoral imagination that builds up – justifying, naturalizing the injustice." So, it's not just saying, "Look, this is the truth, which has been hidden or buried or smothered," but actually, also, "Part of that truth is the lie which has been told afterwards to hide the truth, to legitimate the perpetrator's accounts, and to make that seem natural."

From the archives, Winter 2012 -- Unseen Kennedys: "Home Movies from a Political Dynasty":

"I was fascinated by that initial reel, which nobody had seen since Art Moger put it in a cardboard box in the basement of his house 60 years ago," Engel says. "The reel had film shot by John, Ethel and Bobby Kennedy. You can feel the energy and vitality in all of them." Engle estimates that he, Moger, script writer Paul Boorstin and editor Mark Petitils also read at least 50 books about John Kennedy and his family. "They were all kind of books--positive, negative and in between," Engle says. "We also spoke with people at the Kennedy Library, interviewed four historians who had done significant research about the Kennedys, and talked to Paul Fay's daughter, Sally, and Cam Newberry's son, John. Cam Newberry was Jack Kennedy's classmate at Harvard. Paul Fay was Kennedy's shipmate when he captained a Navy PT boat for the Navy during the war.