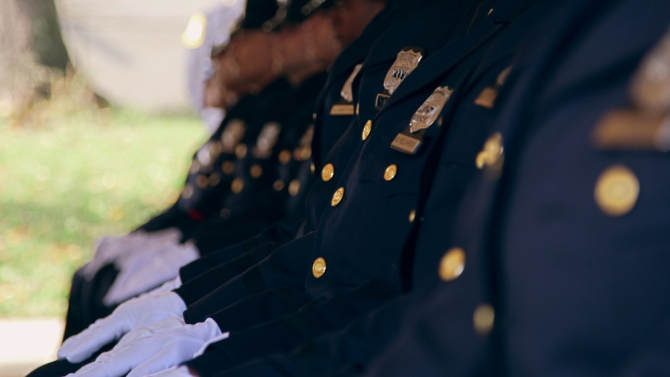 At Variety, Maureen Ryan calls attention to two documentaries of particular relevance to a heartbreaking, chaotic week in America.

News organizations need to be offering much, much more in the way of in-depth coverage of how we got to this point, when it comes to both police-connected violence, gun violence and mass shootings. We need fewer talking heads and more reporting and context. If news organizations are to set themselves apart from the proliferation of coverage on social media, they have the resources go beneath the surface. Yes, Facebook Live can be an incredible tool — but so is “Frontline.”

The New York Times reports on the difficulties of funding a doc without a social/political "agenda."

What’s happened to documentary financing over the last decade, said Debra Zimmerman, the executive director of the specialty distributor Women Make Movies, “is the coalescence of a number of different trends, none of which has been really good for filmmakers who aren’t interested in making social-issue docs.” She cited the closing of the National Endowment for the Arts’ regional grants, the Rockefeller Foundation’s decision to directly stop financing film, “and the fact, unfortunately, that we don’t have any real national support for film as an art form.”

Shelly Palmer considers the impact that billions of social network-connected, video-enabled smartphones will have on how we live our lives in the 21st century.

At the Independent Lens blog, MaryAnn Johanson surveys the history of pioneering women in documentary film.

The idea that films could tell stories as opposed to documenting reality was hit upon by a woman, Alice Guy-Blaché, who made the very first narrative movie, the 60-second-long La Fée aux Choux (The Cabbage Fairy) in 1896. And the filmmaker who arguably created the modern documentary form was Leni Riefenstahl with 1935’s Triumph of the Will. Women have always gotten short shrift when it comes to acknowledging their contributions, but that’s not a reflection of the inestimable value of their work. Movies simply would not look and feel the way they do today without the input of women artists and innovators.

The Dinner Table interviews Michele Stephenson about producing films about the experiences of people of color in America.

The other thing that I think is important, which played a huge role in our film American Promise, is understanding that vulnerability is power. That’s part of creating complicated characters. I grew up in a family where everything was sort of kept hidden, because there is a sense of shame about certain things that ultimately destroy us and give us power to internalized racism. And I feel like by opening that stuff up, allowing ourselves to breathe, can lead us to conversations about how to make things better. So, going back to your question… We need more of our black women to tell our stories, and it’s a challenge. I think that mentorship is really important, which has been really important in my development as a storyteller. So I encourage women who are just starting off to find that mentor, and having a network of peers is really key.

No Film School shares a number of lessons learned from filmmaker Werner Herzog's Reddit "Ask Me Anything" session.

So, how did Herzog discover this elusive "heart of man"? He traveled the world. "You cannot learn it; the world has to teach you," he wrote. "The world does it in its most intense and deepest way when you when you encounter it by traveling on foot. The world reveals itself to one who travels on foot." But before you embark on a Herzog quest of your own, there's one caveat: "I'd like to add that when I travel by foot, I don't do it as a backpacker where you take all your household items with you—your tent, your sleeping bag, your cooking utensils," Herzog wrote. "I travel without any luggage."

From the Archives, March 2003, "Where Journalism and Filmmaking Intersect: 20 Years of 'Frontline'"

Frontline was launched in January 1983, having evolved from WGBH'S 1977 international public affairs documentary series, World. The series was produced under the leadership of Peter McGhee, who then ran public affairs programming at WGBH, and David Fanning, his protégé. According to Fanning, "Peter gave me...a conversation—one that still goes on—about the importance of ideas and the possibilities of television, and about all kinds of other things, from clamdigging to novels to Middle Eastern politics." And over the past 20 years, Frontline has shown a commitment to good journalism, storytelling and a greater understanding of the world in which we all live.

END_OF_DOCUMENT_TOKEN_TO_BE_REPLACED

The Medium and the Message, Participant Productions and Working Films Catalyze Awarness for Social Issue Docs

Playback: Leni Riefenstahl' 'Triumph of the Will'

Ecstasy on Ice: Werner Herzog's 'Encounters at the End of the World'