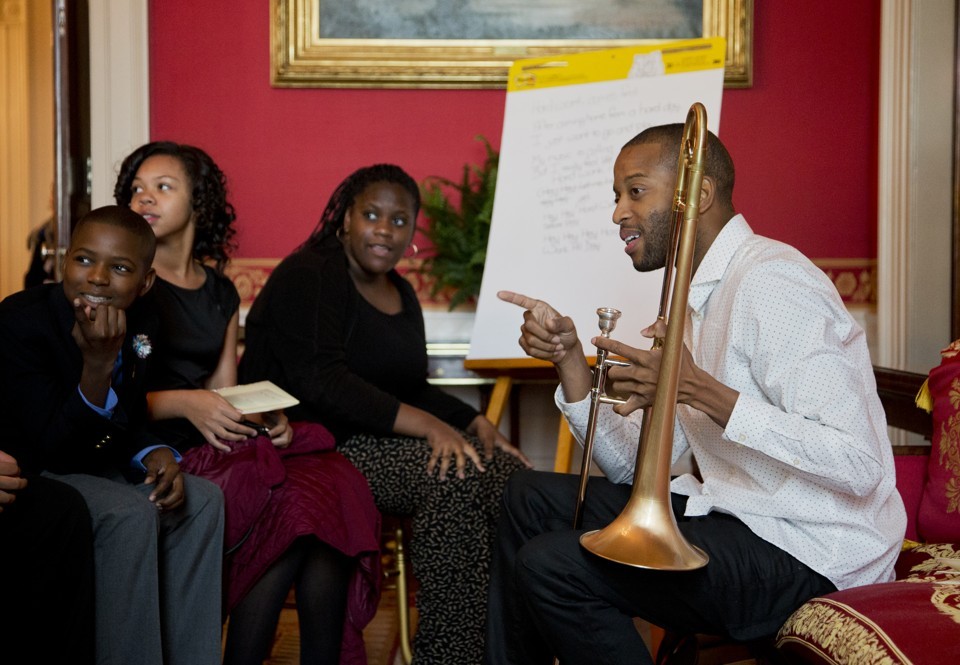 At The Atlantic, Sophie Gilbert outlines the impact that abolishing the NEA would have on rural and underserved communities.

[The NEA's] grants are bestowed to all 50 states in the nation, in all congressional districts. Forty percent of the NEA's budget goes directly to states to spend for themselves, with the proviso that they match the funds dollar for dollar via their own arts agencies—encouraging a further investment in the arts at the state level. Just as significantly, 65 percent of the NEA's direct grants go to small and medium-sized arts groups, keeping the arts alive in rural and underserved communities. It's here where the agency's elimination would be most keenly felt, at organizations largely ignored by private donors, but which bring the arts to audiences including veterans and schoolchildren, often in impoverished neighborhoods.

At Nieman Lab, Joseph Lichterman reports on what could happen if Trump's plan to eliminate funding for public broacasting is enacted.

A 2012 report by consulting firm Booz & Company, commissioned by CPB, forecast what would happen if the system lost all its federal funding. It concluded that "there is simply no substitute for the federal investment to accomplish the public service mission that Congress has assigned to public broadcasters and that the American people overwhelmingly support."

Many excellent French movies have been made in [the past three decades]; many talented directors have arrived on the scene with noteworthy débuts—and most of them have become quickly less audacious after a first film or two. Some exceptional filmmakers have built unusual careers on the margins of the system; some have worked within the system to bring distinctive worlds to life; none have revolutionized the art. For the most part, France's filmmakers get old while they're still young, normalized and formatted by a rigid system of financing and production, which is embodied in the hurdle-hopping that Simon shows prospective film students enduring at France's most prestigious film school, La Fémis.

At The Talkhouse, Kirsten Johnson and Agnès Varda sit down for a podcast about memory, time and artistic boundaries.

"The problem is, you want to do something with all these meetings, all these feelings you have, you want to make a film, you want to make art, you want to make a documentary or a fiction. If you wish to create something, you have to put yourself in a position that if you are ashamed to do it, don't do it. Stay home. And if you think that you have the right to try to get these images. And there is a limit to that, I know that. There are things I don't want to film, and including in the situation, some things should not be filmed and some ways some women are treated, let's say, whore, you know, and the system of prostitution, it's a terrible subject because it's maybe moral, it's maybe social, it's maybe difficult, it's maybe religious. But at some point, I don't want to touch images that I don't even know how I can stand them."

Enter the latest prestige podcast obsession, "Missing Richard Simmons." Thanks to Mr. Taberski's blend of pop culture and pulp — think an aerobic "Behind the Music" but with a winking noir plot that proffers theories about Mr. Simmons's mysterious disappearance — the show is instantly engaging. But soon, the podcast's draw becomes disturbing. As Mr. Taberski digs deeper into Mr. Simmons's personal life, the question becomes not "What happened to Richard Simmons?" but "Is it any of our business?"

At Hyperallergic, Adam Curtis argues that "documentary storytelling has become so rigid."

"I've noticed with HyperNormalisation, in the United States, it's got passed around like an underground thing. I think that's not a bad way to publish a thing. I'm not trying to make a traditional documentary. I'm trying to make a thing that gets why you feel today like you do — uncertain, untrusting of those who tell you what is what. To make it in a way that emotionally explains that as much as it explains it intellectually."

"Our funding is cobbled together from federal funding, membership station dues (approximately 50 percent), philanthropy and some business revenue. We have to answer these questions: How do we sustain ourselves if we're going to have work on multiple platforms? How do we get the work out there? How do we support that structure? What is the business model to ensure that we remain viable? At the end of the day, we're a nonprofit media company, so the work that we are more focused on isn't necessarily commercially viable. How do you support that in a way that makes sense?"

END_OF_DOCUMENT_TOKEN_TO_BE_REPLACED

Portrait of a Vagabond: An Appreciation of Agnes Varda