Essential Doc Reads: Week of May 29 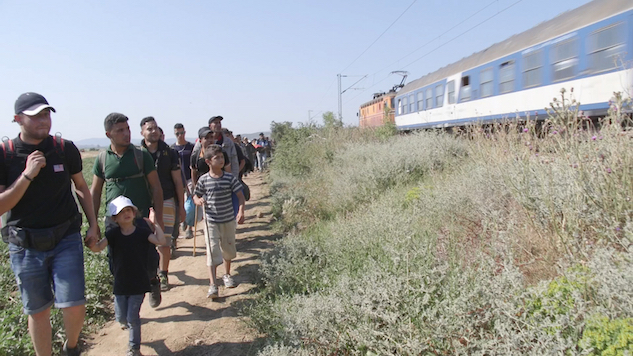 With the battle for a free press increasingly fraught, the mere fact that the outlet produces, promotes and releases episodic televisual journalism pro bono is almost heroic in the context of most broadcast and cable news coverage. Still, cautious, thoughtful consumption is advised: If a common CNN segment is a milk-chocolate Hershey’s bar, a Field of Vision episode is a bitter dark chocolate truffle.

At Immerse, Diana Barrett of The Fledgling Fund provides a funder's perspective on Virtual Reality.

What I have found more helpful to think about is the degree of immersion that each project provides, remembering that we’ve all been immersed, to various degrees, in experiences that transport us to another way of being and feeling. Sometimes this immersion can be decidedly low tech: a book, music or a traditional film. However, putting on a headset can take this feeling, this sense of departure and re-entering, to the next degree.

At Reverse Shot, Emma Piper-Burket revisits Forough Farrokhzad's The House Is Black in the wake of Trump's "Muslim Ban."

It's this mass targeting of the vulnerable (refugees) and misunderstood (Muslims) that recently brought The House Is Black to the forefront of my mind. Farrokhzad wrote, directed, and edited this poetic, 21-minute document of a leper colony in Northern Iran, and it’s the only film she ever made. Her cuts are often jarring, the unexpected relationship between sound and image create a feeling of almost 360-degree immersion in the space. The rhythm of the edits and her juxtaposition of poetic visuals with an unwavering gaze on the inhabitants of the leper colony create a gentle directness that forces the viewer to absolutely focus on her subjects. It’s a film that reminds you that societies are good at creating outcasts.

At Politico, Hadas Gold reports that Bannon ally and right-wing documentarian Michael Pack is a leading candidate to head the Broadcasting Board of Governors.

Should he be appointed by President Donald Trump and confirmed by the Senate, Pack would be the first CEO of the BBG without a board as a firewall because of a little-noticed provision in last December's National Defense Authorization Act that disbanded the bipartisan board that controls the BBG. “The White House could theoretically use the BBG for any kind of messaging,” one senior government official with direct knowledge of the situation said. “People are generally worried about what might happen next because it would change the nature of BBG from having a CEO and a board and a track record for protecting independence to what might come next."

At the Los Angeles Times, an obituary for Sergio Haro, a Mexican reporter who was the subject of the 2012 documentary Reportero.

Colleagues from Zeta said that at the time of his death, Haro was at his computer, working on an article for Friday’s edition. Haro’s career stretched over three decades, during which he covered a multitude of subjects, from the March 1994 assassination in Tijuana of a Mexican presidential candidate to the illicit capture of totoaba fish in the upper Gulf of California. In his most recent published article, Haro wrote about payments by the Baja California government to the state’s media, “financially benefiting some media, individual reporters, and punishing others,” he wrote.

At NFB/blog, an interview with filmmaker/activist Astra Taylor about her ambitious new doc What Is Democracy?

“But Trump is the just one symptom of a deeper disease,” says Taylor. “Democracy is in trouble all over the world, and critics of the American system have been raising the alarm for years about rising inequality and the way corporate money corrupts politics. But if Clinton had won, it would have been business as usual. So Trump’s victory has heightened the sense of crisis. What exactly is democracy – this thing we’ve all been taking for granted?”

From MovieMaker, Leah Warshawski refletcs on the challenges of making her second doc.

It was with trepidation that my husband and I decided to make our second film, Big Sonia. We hoped that doors—and pocketbooks—would open widely this time around. We also assumed our relationships with festivals and funders would streamline the process and perhaps allow us to complete the film under five years. But we were very, very wrong.

"So much of the news coverage about the US-Mexico border was so decontextualized," Ruiz recalls. "It's what I call ‘vulture journalism'— bodies in the street and the decapitations and the shootouts—but there was no context. I just found it astonishing that even reputable media outlets were just doing slapdash coverage of the war next door. It continues to this day." It is precisely this sloppy, sensationalist coverage that led a few daring reporters to demand a new standard in journalism, its instigators wanting nothing more than to distance themselves from private interests and government influence.

'Made In America,' 'Eight Days A Week' Win at FOCAL Awards
read more

END_OF_DOCUMENT_TOKEN_TO_BE_REPLACED

A Conversation with AJ Schnack about 'Field of Vision'