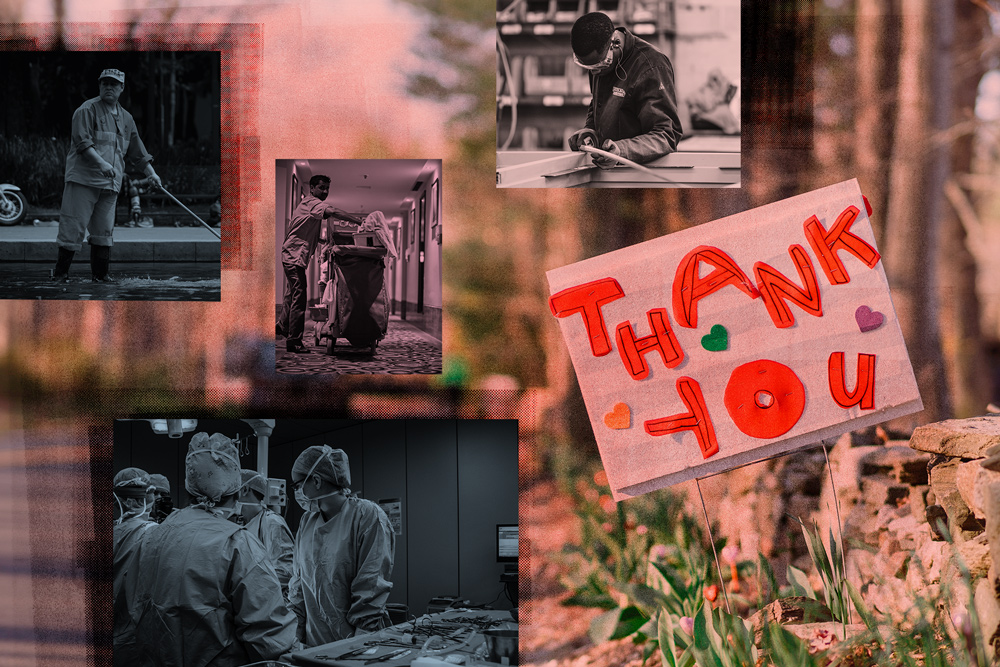 Most of us find ourselves spending an unprecedented amount of time at home, and cities seem to have come to a standstill. However, thousands of individuals have been waking up and going to work throughout the pandemic, for their loss from the workforce would be devastating for our daily lives. Many of us have the luxury to continue our professional lives from the comfort and safety of our homes, but essential workers are truly at the frontlines of the crisis, ensuring that we remain fed, housed and, if sick, taken care of, during these times.

Whether it's medical staff working in emergency rooms and testing centers round the clock, or food service employees and grocery store clerks who report for work daily (despite earning substantially less than those staying at home), there are many that are responsible to ensure society functions through the crisis. IDA recommends some of these documentaries that pay homage to medical and essential workers, through stories from around the world.

Directed and conceptualized by Peter Nicks, this 2012 documentary is based on the director's multimedia project installed at the Highland Hospital in Oakland, California. Nicks placed interactive storytelling booths in the hospital's busy waiting room, and collected testimonials from clinic visitors, often consisting of high-risk individuals without medical insurance. As this tapestry of conversations and experiences from inside the hospital unfold over one 24 hour-long duration, it becomes a compelling portrait of not only the hard-working hospital staff who dedicate their lives to their work, but also the American healthcare system at large.

IDA Documentary Award winners Rob Epstein and Jeffrey Friedman's 2018 documentary is a gripping, intimate look at the medical practitioners involved in making the difficult decision between life and death for terminally ill patients. The film is centered around Palliative care, which involves improving the quality of life for patients with serious illnesses—a process that involves as much emotional support as it does medical. As we are brought closer into the worlds of these patients, the documentary captures the fleeting yet emotional bond between doctor and patient.

Featured on the new entertainment and documentary platform Topic.com, Night Shift is a four-part series of short documentary films directed by Sam Osborn. Each episode captures a different two-hour period during nighttime in New York City, from 10 pm to dawn. Shot entirely in black and white, this short but wonderful series pays homage to the lives of foodservice professionals, janitorial staff and all the myriad workers who ensure that the city wakes up to another productive day, night after night.

Feras Fayyad's Academy Award-nominated 2017 film documents the Syrian Civil War through the lens of Amani Ballour, a female doctor who operates a secret underground hospital in Aleppo nicknamed 'The Cave.' For Syrian civilians who are in desperate need of medical attention, Dr. Ballour becomes their saving grace; but even in The Cave, she battles systemic sexism and a whole host of obstacles in her path. This film is an unparalleled story of the medical workers who literally dedicate their lives to the frontlines of conflict.

Lifelines in the Lockdown

Part of CBS' ongoing investigative journalism series REVERB, this particular episode was created in the wake of the COVID-19 crisis. While millions of Americans have now been forced to stay at home for weeks on end, grocery store employees, drivers and other essential workers have ensured that society still functions as normal, and is ready to deal with a resurgence in human activity. This episode specifically investigates whether the coronavirus will allow us to reassess the needs of essential workers, and ensure a more secure future for those who support us through times of crisis.

Set in the Los Angeles County USC Medical Center, home to one of the country's busiest emergency rooms, Ryan McGarry's 2013 documentary follows young medical residents who follow in the footsteps of the doctors who deal with traumatic incidents and intensely demanding cases on a daily basis. For aspiring medical workers, the hierarchy within a demanding emergency room can become the ultimate test; this documentary portrays how, even in the face of a "Code Black" crisis (where the ER is completely full), doctors must persevere through it all.

Kartemquin Films' 2015 documentary, shot in six episodes (and produced by IDA's own Maggie Bowman!) tells the story of ordinary Americans reckoning with a post-recession world. With the novel coronavirus severely affecting American productivity and creating unprecedented amounts of job insecurity, many hardworking individuals were forced to get creative and navigate their way through the economic crisis. As we face another one, along with the current public health crisis, this documentary’s honest portrayal of individuals and their everyday struggles is a testament to the resilience we find everywhere around us.

END_OF_DOCUMENT_TOKEN_TO_BE_REPLACED

The Final Passage: 'End Game' Offers a Lesson on Death and Dying

The Real ER: 'Code Black' Looks at Healthcare from a Physician's Point of View