The Feedback: Alex Lora and Adan Aliaga's 'The Fourth Kingdom' 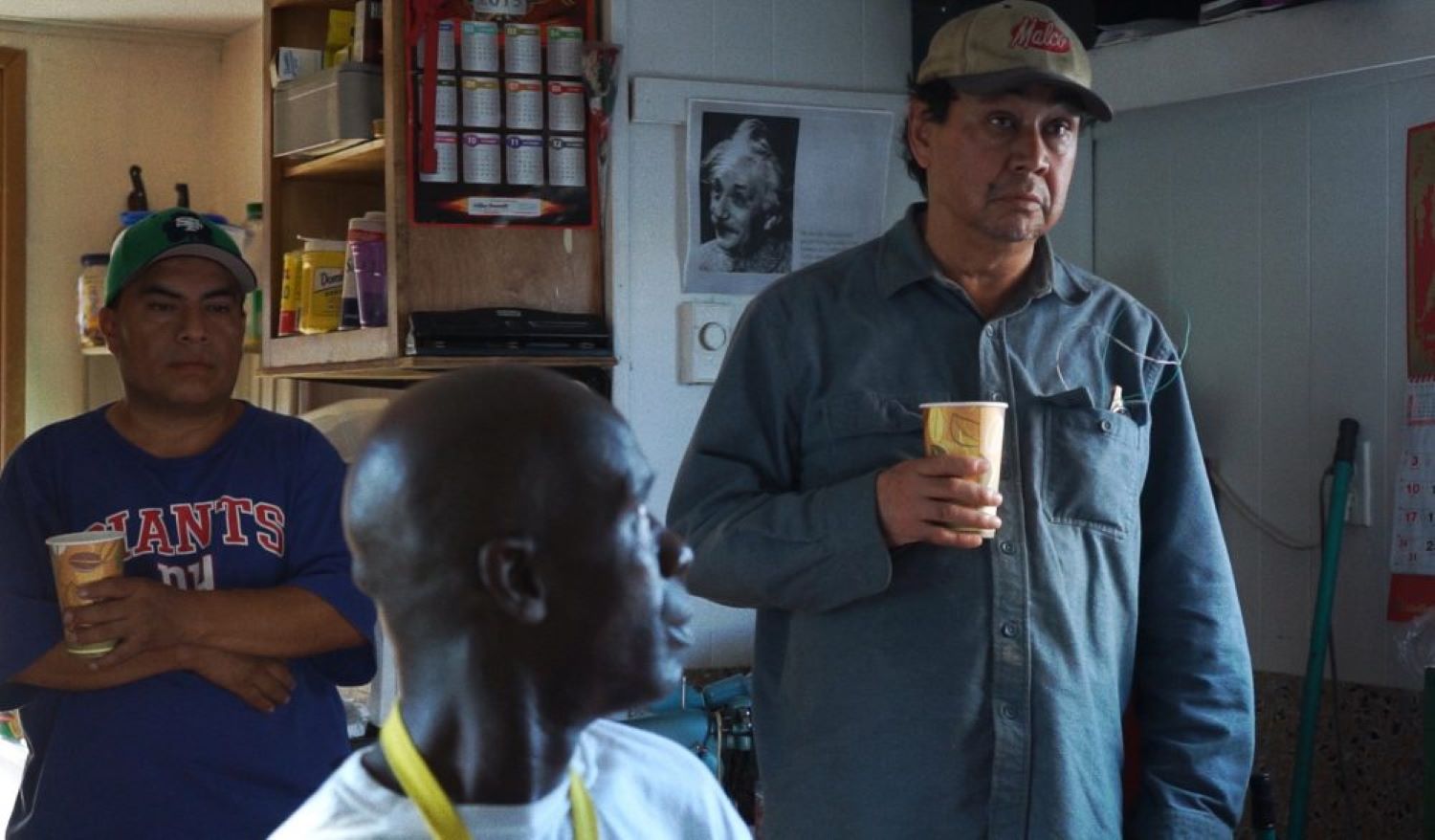 Since IDA's DocuClub was relaunched in 2016 as a forum for sharing and soliciting feedback about works-in-progress, many DocuClub alums have since premiered their works on the festival circuit and beyond. In an effort to both monitor and celebrate the evolution of these films to premiere-ready status, we reach out to the filmmakers as they are either winding their way through the festival circuit, or gearing up for it.

In this edition of "The Feedback," we spotlight Alex Lora & Adan Aliaga’s El Cuarto Reino (The Fourth Kingdom), an IDA Pare Lorentz Documentary Fund grantee. We caught up with Lora and Aliaga via email. This interview has been edited for length and clarity.

Synopsis: El Cuarto Reino (The Fourth Kingdom) is a documentary about the daily life of a very particular "Kingdom" in New York City in which both undocumented immigrants and US citizens in difficult situations, share the same disappointment: a reality very different from the one promised in the Land of Opportunity. Although they have deeply felt the disappointment of not having achieved the American Dream, they keep their hopes alive.  René, a Mexican who still needs to go to Alcoholics Anonymous to avoid relapses. He manages to spend most of the time sober. Walter, from Guatemala, is a very intelligent and enigmatic man who makes special glasses that transform reality. Pier, an American suffering from depression, who was a pianist in a jazz band, finally found happiness picking up cans. Eugene, also American and still struggling to recover from his drug addiction, discovers a therapeutic outlet by maintaining the compost pile. The four of them were reunited by Ana, a missionary who left Spain more than 40 years ago and founded "Sure We Can" (SWC) in 2007, a nonprofit organization for people in need where they can exchange cans and plastic bottles for 5 cents.

Documentary: How did you find your subjects? Why did you choose to focus on Rene?

Alex Lora & Adan Aliaga: Adán Aliaga began collaborating in the NGO Sure We Can to make several videos for his social networks of the organization, and there he quickly connected with René, because they spoke the same language and because of his kind personality.

D: Was it always your intention to film in a vérité style?

AL & AA: Yes, from the beginning all the conversations between Adán Aliaga and Alex Lora went in that direction. The goal was to make a contemplative film, without interviews, that would follow and portray their daily lives.

D: How did you establish a relationship with your subjects before and during filming?

AL & AA: It was a matter of time. If you want a camera to be present in all the important and private moments of people, you need to gain their trust, and the only way to do that is by spending time together. You need to live with them so that they behave naturally and do not feel uncomfortable. A lot of time we went without the camera, and we even helped a bit with some of the characters’ duties. That is why the first recordings, when we started the project, are completely different from the moments we were able to capture after two years with them.

D: What message do you want the audience to come away with after watching this film?

AL & AA: We didn’t want to give a message; our wish is that viewers find in the movie their own message. That said, there are themes that we were interested in and we think that can be found in different layers. The deconstruction of the American Dream, based on the hostilities that immigrants have to endure; the double standards when it comes to demonizing the other, saying they are taking citizen’s jobs that on the other hand no one wants to do: All that is contained in the  ironic presentation of the illegal alien as someone who is not from this planet. We also wanted to question the idea of “progress” and how that so-called development that came from the American way of life during the ’40s, with the messianic invention of plastic, which now has become a serious environmental problem. But as I said, those were some of the concepts we were thinking about while we were doing the film, and in the end it only matters what the audience finds in it and not what we wanted to tell.

D: Do you think you put undocumented subjects at risk by putting them in the film?

AA & AL: We thought a lot about it and we took extreme care of the situation, respecting everybody who didn’t want to be in the film. On the other hand, the organization has already been recorded in numerous videos and reports, even for the UN TV or The New York Times, so we don’t think that we jeopardized any of the subjects portrayed. They’ve also seen the movie and they felt okay. In some cases they asked to be called by a nickname in the credits or even when we were there.

D: Why did you choose to tell this story/slice of life in this way?

AL & AA: We are filmmakers so in addition to telling the story of the center and its inhabitants in a way that was not very expositional, for us it was fun to try to deconstruct their reality by choosing the moments that most fit a tone that felt appealing for us. Sometimes it’s mysterious, sometimes hyperreal and dramatic, sometimes funny and surreal, and all that is filled sometimes with a magical tone with a touch of science fiction. The Fourth Kingdom is a special place, almost magical, where we could find the most unexpected things, therefore, where everything is possible.

D: What did you learn in the process of filming this documentary?

AL & AA: It has been a very enriching experience to get to know the whole Sure We Can family. Through her tenacity and her ability to lead from humility and simplicity, Ana has proved that things can change and has embedded her personality to the recycling center. It has turned into an open house for everyone, where the community can participate in all the activities that are carried out, being very sensitive in the inclusion of all sorts of arts.

Getting to know people who continue fighting for their particular American dream, regardless of their condition and struggles, people who fight daily poverty while keeping their integrity, and sharing time and conversation with them, has been one of the most enriching experiences of our lives.

D: What were your biggest challenges filming this doc?

AL & AA: Gaining the trust of the subjects and staying there through two years of shooting without the right resources was a challenge during the production. In post-production, we struggled finding the right tone and understanding the dynamics of the center. Combining the different stories in a narrative in which all the characters would have a consistent direction, trying to create different layers of reading, was also difficult and took us a lot of time in the editing room.

D: With regard to your screening at DocuClub, what were your expectations going into that screening?

AL & AA: We were excited about the idea of sharing the movie with a specialized audience that didn’t know anything about the film and hearing their feedback. We remember that during the screening, instead of looking at the screen, we were just staring at people’s faces, trying to read them and find what moments were problematic. It was the first time that Ana, René and Eugene, some of the subjects, watched the film, so we were also curious about their reactions.

AL & AA: No. We participated some months earlier in a work-in-progress forum at DocumentaMadrid. Back then it was a very rough cut, so the movie changed a lot before it made it to the DocuClub.

D: What were the central challenges in your film that you felt could benefit the most from the DocuClub screening?

AL & AA: All the challenges related with the narrative. We were a bit worried because we thought that maybe nothing was happening during the film. We were also thinking that maybe our lead was not active enough and we were definitely concerned about people following the different characters and storylines.

D: What audience observations did you find most surprising and unexpected?

AL & AA: The first questions we got were if we knew who our target audience was. We were not ready to hear that as a first question; at the same time, it’s also important to at least have that in mind. We wanted to make a movie we would like to see, so the question ended up feeling like a self-interrogation: Who are we and why do we want to make this movie?

D: When you went back to the edit room, what were the key changes you made?

AL & AA: There were two very problematic moments and one that created some division of opinions. The beginning was confusing and chaotic. Some audience members said that it was difficult to engage with a character, that they don’t know that René was our protagonist and they would get a bit lost in the chaos of the organization, not knowing how it really worked. We addressed that, trying to focus more on our main character from the beginning. Around minute 50, some people said that they lost interest because nothing new was happening and the tone and the mood were a bit linear, so we fixed that by adding a scene of our main character with a painter that we had not thought of including in the cut. But the scene was a bit funny, so it changed the mood, plus it helped in the arc of our subject to establish a relationship with the arts, which payed off at the end when he is playing the piano. The last question was about the epilogue. A lot of people said that we needed to finish the movie when the character is at his lowest point, three minutes before the actual ending. We talked a lot about that, but we decided to tweak it, adding a little scene in which the character shaves and keeping the rest of the epilogue because it gave redemptive meaning to the closure.

D: What were the key factors that determined that your film was ready for your festival premiere?

AL & AA: After the screening we had another round of feedback with friends, and the issues that they detected, we thought that we were not able to fix them. We also felt that we liked this cut. So somehow the feeling in the team about the movie was very positive and we all felt confident with the result. So we worked in the sound design and the color and when that was done we felt that the movie was ready to see the world, and the other way around.

D: What were the most valuable takeaways from the screening?

AL & AA: We learned that the movie has its own voice and it resonates in different ways with different people. We also learned that all feedback is good, but not every comment is useful. We also learned that you might feel vulnerable when showing a movie that’s not finished to an audience you don’t know, but besides the initial anxiety, that turned out to be a very positive experience that made the film more consistent. We are really thankful for the opportunity, and we would recommend it to other filmmakers.

Lauren Giella is an editorial intern at the IDA. She is a senior journalism major at The University of Southern California.