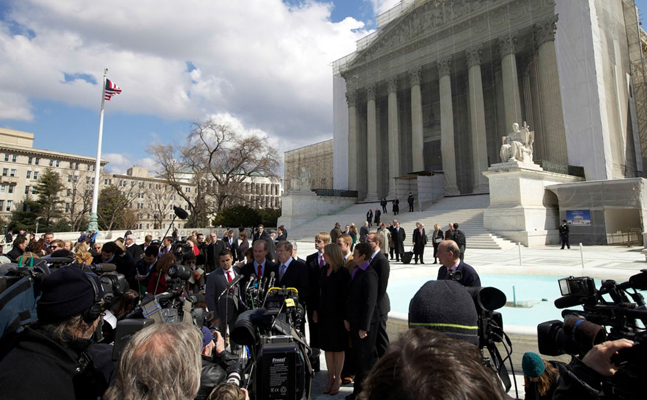 In the summer of 2013, directors Ben Cotner and Ryan White found themselves on the steps of the Supreme Court in Washington, DC, filming the thrilling victory of a long legal battle to overturn Proposition 8, a ban on same-sex marriage in California. Who could ask for a better third act for a documentary? There are all your beloved subjects, walking hand-in-hand down those dramatic white steps as the crowds cheer them on.

But when Cotner and White first started filming The Case Against 8, they had no idea they would end up with such a beautiful conclusion. As White explains, "We didn't know that it would just be the type of case that was filed on paper briefs. So we didn't even really know how cinematic our film would be, or if there was a film."

White and Cotner actually met only a few months prior to teaming up on The Case Against 8 back in 2009. Neither filmmaker had any experience directing such a high-profile story. White had a couple documentaries in the works (Pelada; Good Ol' Freda). Cotner, an acquisitions executive at Paramount, had worked on such hits as An Inconvenient Truth and Mad Hot Ballroom, but had never directed anything.

Armed with nothing more than an all-access pass to the offices of the American Foundation for Equal Rights (AFER), the activist organization trying to overturn Prop 8, they blindly started shooting. Hoping to be as unobtrusive as possible, they worked with a miniscule team, and in fact shot the vast majority of the film themselves. "To be honest, I don't think we were prepared, organizationally, from the beginning," Cotner admits. "We were literally just labeling tapes and dropping them into a safe deposit box as we were going."

Cotner and White didn't have much to film other than a bunch of activists scribbling legal strategies on white boards—until AFER recruited a very unlikely celebrity to lead its legal charge. Ted Olson had not only successfully argued Bush v. Gore in front of the Supreme Court back in 2000, but he later served as Bush's solicitor general. He was the most famous conservative lawyer in America but, as the film shows, he had no qualms about breaking ranks from the Republican party line to defend what he calls the "conservative value" of marriage, describing his work with AFER as "the most important thing that I've ever done as a lawyer, or as a person."

Olson then recruited none other than his Bush v. Gore opponent, constitutional lawyer David Boies. The warm camaraderie of this unlikely pair sets the calm, clear-eyed tone (nicely accentuated by composer Blake Neely's gentle score) that distinguishes this film from all the partisan hyperbole this story usually gets in the national media.

But it's the four plaintiffs in the AFER case that give The Case Against 8 its powerful emotional core: Kris Perry and her partner, Sandy Stier; and Jeffrey Zarrillo and his partner, Paul Katami. These four average, everyday people initially joined AFER's campaign thinking they would just be lending their names to a mess of legal documents. They never expected to become figureheads in a seething national debate. 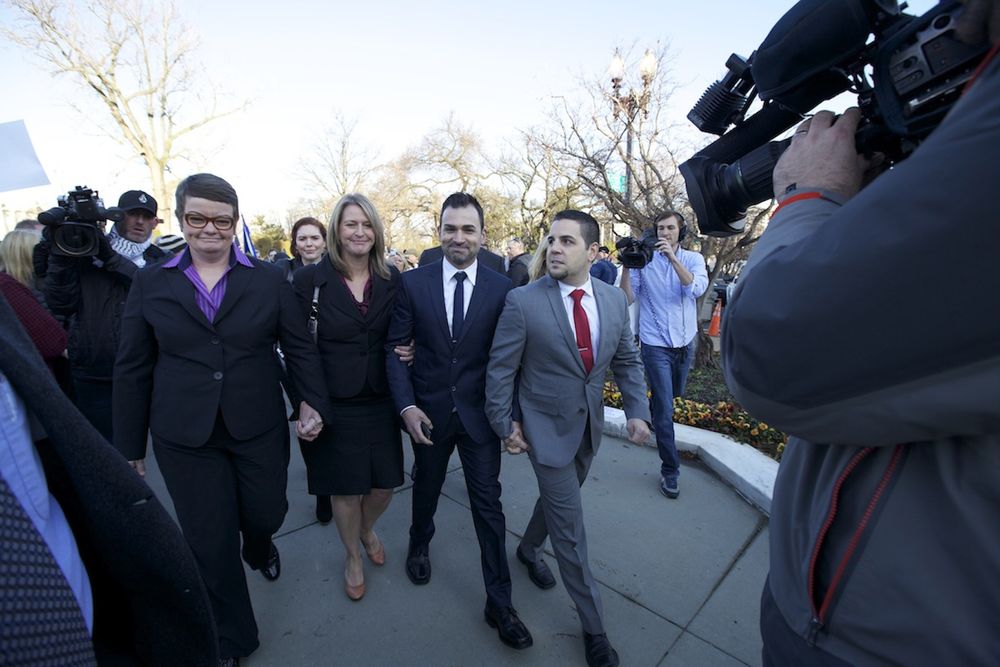 The filmmakers capture the personal journey each plaintiff takes as the AFER lawsuit quickly transforms from a case "filed on paper" to a very public trial. "Kris and Sandy especially were pretty wary of us," says White. "Well, they were wary of the whole process. They were the ones that were most thrown off with the fact that it was going to go to trial because they were these private moms with four boys, and suddenly they were going to have to be in a courtroom testifying in front of the entire world."

We see the plaintiffs learning to face the kind of public scrutiny they had never experienced before as they are prepared for court by Olson and Boies, address the national press for the first time, and discuss the trial with their families. As Perry shares in the film, "The first day of trail, we just laid there in the dark holding hands thinking, ‘Oh no, oh no, oh no.' For Sandy and me, the fear around what could happen to us as women and mothers and bosses...I just remember feeling stricken and very anxious."

The testimonies the plaintiffs ultimately made in court were moving for everyone involved in the AFER case. But because of a ban on cameras in the courtroom, none of it was captured for the film, so Cotner and White had to find a way to re-create those emotional moments. Their solution was a last-minute decision, but it turned out to be the best part of the movie.

While filming the final interviews with the plaintiffs, Cotner and White decided that if they had a little extra time they would have each plaintiff read their testimonies out loud on camera from printouts of transcripts they were holding in their laps. The filmmakers were stunned with what they had captured. White recalls, "The first time we showed the film to Sheila Nevins, our executive producer at HBO, she said, 'That should never work'—and then she's like, 'It's my favorite part of the film.'" Adds Cotner, "What comes through is that these aren't hysterical people who are going for some sort of fringe group. These are people just trying to live their lives. They're not doing this for attention and they're not doing this for a big political statement. They're doing this because these are issues that affect them in a very real and normal way. And I think that's why their emotions come across so clearly." 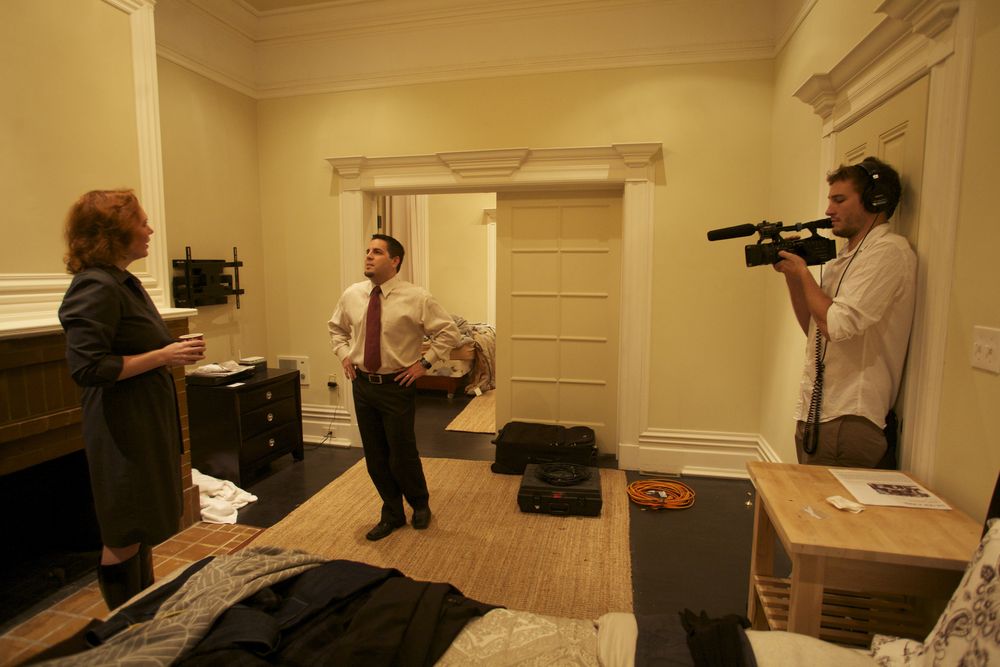 That AFER trial ended with a federal judge striking down Prop 8. But the proposition's proponents then appealed that decision with the Supreme Court. Although that appeal put marriage equality on hold in California for the next three years, it changed everything for Cotner and White. "Ben and I had to have some serious conversations about like, ‘Wow, we could really have a really good movie here,'" says White.

HBO soon came on board, and the filmmakers retrieved from their safe deposit box a total of 600 hours of footage that had never been logged. They were thrilled when veteran editor Kate Amend joined the project. "It was huge for our film to have gotten Kate on board," says White. But they had just seven months to lock a cut for the 2014 Sundance Film Festival, and had a lot of painful decisions to make. "That was torture," says Cotner. "I think the first assembly was somewhere around six hours and we had to whittle that down over a couple of months to two hours. So there was a lot of heartbreak in that process."

On June 26, 2013, the Supreme Court finally ruled on the AFER case, dismissing the Prop 8 proponents' appeal, meaning the ruling that came out of the 2010 court case where all the plaintiffs had testified was official: Prop 8 was overturned. "We definitely had chills," says Cotner. "Here we were, four years later, standing on the steps of the Supreme Court where so many historic decisions—Loving v. Virginia, Brown v. Board of Education—were made. It felt like you were living in one of those moments."

The Case Against 8 airs June 23 on HBO. In an unusual move, the company will release the film in theaters June 6, followed by extensive community-based screenings around the country through 2014. "We're really lucky that HBO not only believes in the film as a piece of film, but also they are really passionate about the message itself," says White.

Same-sex marriage is currently legal in 19 states and the District of Columbia. But recently, federal courts in eight other states have struck down anti-gay marriage bans like Prop 8. As in The Case Against 8 story, those rulings are on hold as the decisions make their way through the appeals courts. "I think it's particularly important for us, the message of what these people did," says Cotner. "Even though it didn't get marriage for all 50 states, it does inspire this whole new round of lawsuits that are cropping up around the country, and it will hopefully bring marriage equality to all 50 states soon."

Elizabeth Blozan is the director of Rebel Beat: The Story of LA Rockabilly and is known around Hollywood as "the world's greatest transcriber."