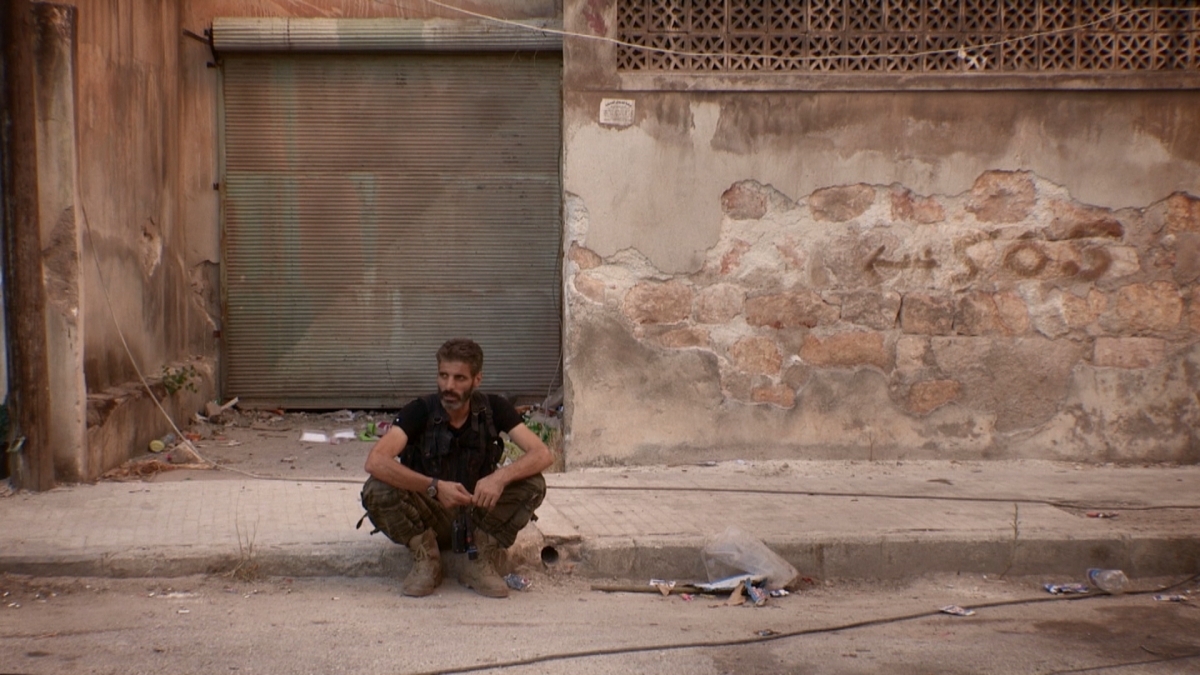 Editor's note: Over the past few weeks, we at IDA have been introducing our community to the films that have been honored by the Academy of Motion Picture Arts and Sciences with an Oscar® nomination in the documentary category. You can see Watani: My Homeland on Saturday, February 25 at 7:50 p.m. at the Writers Guild of America Theater as part of IDA's DocuDay.

As a physician, photojournalist and now filmmaker, the German-born, Barcelona-based director Marcel Mettelsiefen has made over 25 trips to Syria, piecing together an ongoing chronicle of tragedy and resistance in that war-torn country. The Oscar-nominated 40-minute short Watani: My Homeland is the second film that Mettelsiefen has made with a family living in Aleppo, on the frontline of the Syrian civil war.

When the film begins, the Free Syrian Army commander Abu Ali is kidnapped by members of the Islamic State. With his safe return looking increasingly unlikely, Abu Ali’s wife, Hala, and their four children decide to begin the process of emigrating to Germany. Watani is an intimate, on-the-ground account of one family's escape from an impossibly dangerous environment to a bewildering, completely unfamiliar one.

Documentary reached Mettelsiefen by phone in Barcelona to discuss his unlikely career path, filming on the front lines, and maintaining a personal connection to the family at the center of his film.

How did you go from doctor to photojournalist then filmmaker?

After college, I wanted to become a doctor. In Germany, it's complicated to get into medical school; there's a point system, and you have to have a high score to get in. I didn't get the score immediately, so I was looking for something to do in between. In 1998, I took a photography workshop and started taking pictures for the first time. I did an internship at the Associated Press, and got to Tel Aviv. The second intifada started, and there I was, [getting into] conflict photography, and it never really left me.

I was not really happy as a photographer for a news agency like AP, where you have to do breaking news all the time. I was more interested in the storytelling, reportage thing. With the Arab Spring, and with Syria, in 2011, it was the first time that I took a video camera into my hands, because I entered during the uprising in Syria through a series of tricks. I could prove that I was a doctor, and I applied with my first name, Jorge, and my last name, for a visa to study Arabic. This was a perfect cover, [but] I wasn't able to bring my normal camera gear. [Working] as a medic, I would take pictures with my iPhone for Der Spiegel, and I then decided to just buy a camcorder. I decided to do video, and never left it.

So you taught yourself to become a documentary filmmaker.

Syria opened every door. Being one of the very, very few who have been able to work in that country, since 2013, I've been in and out about 22 times, and every time I came out, I had footage and I would call any channel and they would sit with me and go through the material. I started with a five-minute piece, then we made a 15-minute piece, then a 30-minute piece, then an hour. It was driven by working in a very, very privileged way by having strong teams behind me. In 2013, I decided to make a film about the uprising through the eyes of children, but I had already a huge network of people I knew in the country, on-the-ground - so-called fixers, activists, who would help me to get in and out again.

Exactly. When I decided I want to do a story about children, I needed to find the right ones. I knew Abu Ali from previous stories. He was in the environment where I was hoping to find children. It was the frontline; it was very visual. Abu Ali said the only children in this area are his own children. He introduced me to them, and that's when everything started. I knew right away: these were the children I was looking for.

What made you decide to film a follow-up to Children of Syria? Did you know that Watani: My Homeland would be a story about refugees?

In 2013 I first met the family of Abu Ali, and I did an hour-long film about them. This film I did with material from just four days. It had become so dangerous - three French journalists got kidnapped by the Islamic State - that I was not able to film longer than four days. As a filmmaker, if you realize you have strong characters, and they tell you, "Four days, that's it, then you have to leave"…you're more than devastated. I was able to make 60 minutes out of four days of footage, but it became pretty clear that I had to go back as soon as I could to keep up with this family. I thought it would be a long film about the same family in the very same environment, but then things changed. Abu Ali disappeared. The mother, after a year of being alone, [decided to leave]. I followed the family as it became this refugee story.

How did your filming process - and your role - change when the family was resettled in Germany?

It had already changed. I was self-producing the whole thing. Nobody wanted to assign me to go into Syria in 2013-2014, because so many journalists got kidnapped. Me being kind of stubborn, I realized I had to do it on my own. When you go there, you're not staying in a hotel, then you meet with them in the morning then go back and relax. You stay with them, sleep with them. If you're with a family in need, who are going through a very hard time, it's impossible not to engage. A good documentary requires access, and in order to gain access, you have to give a lot in order to receive. I became part of the family. It was hard to understand: Which role am I playing? Am I myself, the friend, the person who’s listening? Or am I then the person who is directing a documentary?

How have you and the family reacted to two major, simultaneous pieces of news: the Oscar nomination for this film, and the Trump administration’s travel ban? One seems like a welcoming embrace, the other one a rebuke.

That's exactly what I thought as well. To see what's going on with the new US administration, which is playing with fear, hate and populism, this is scary and reminds me, as a German, we have been there, and it doesn't end well. At the same time, you see a huge movement of civil society, journalists, actors, intellectuals in the US who are saying, "Stop; that's not us, that's not our country. We will resist." Two different things are going on in your country, both very prominent and visible.

Hala used to watch the Oscar ceremony in Syria with her husband. It was a bittersweet moment for her to realize that she will be going [to the Academy Awards] alone, without her husband. It’s an emotional moment.

Akiva Gottlieb is the IDA’s Communications Manager, and Associate Editor of Documentary Magazine.