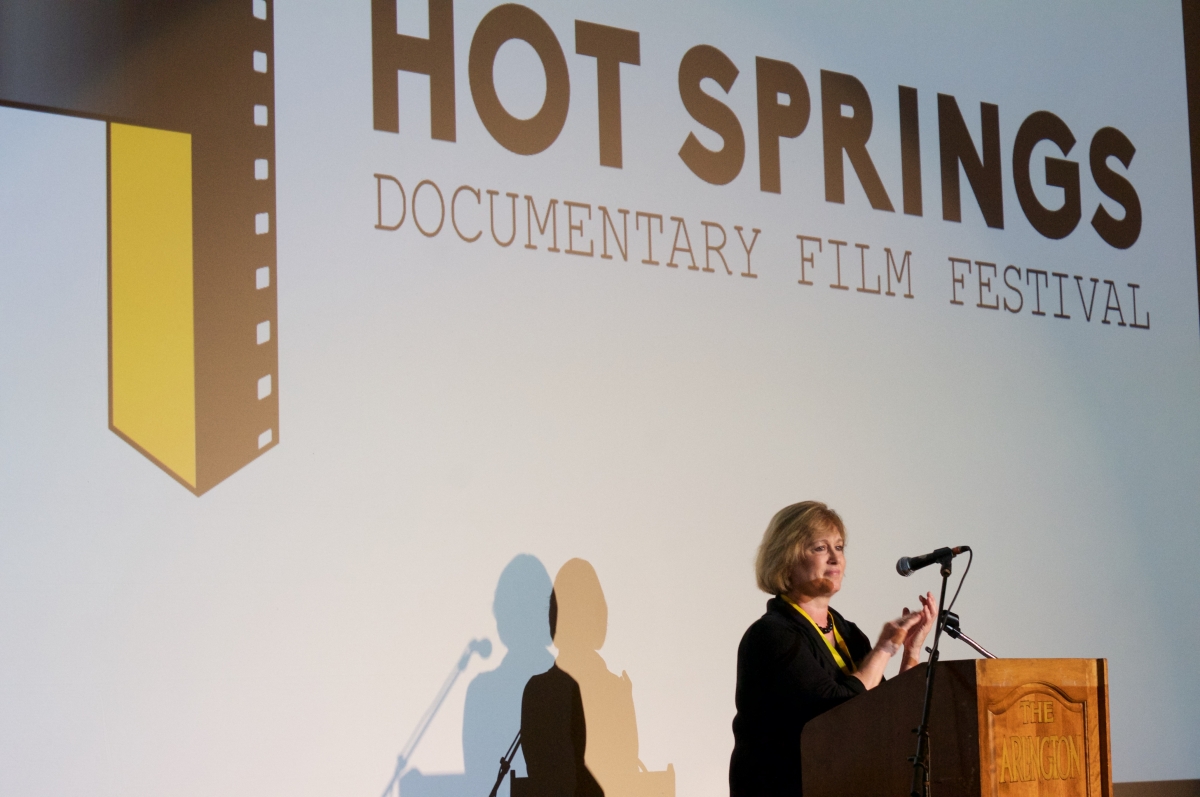 There's a lot about Hot Springs, Arkansas, that might seem unexpected—or even quirky, as outsiders sometimes see it.

Specifically, the city was neutral ground for gangsters in the 1920s and 1930s, when Al Capone and his cronies were regulars around town. During the same time, Babe Ruth and other Major League Baseball players descended on Hot Springs for spring training, which continued until the 1950s. It's also where former President Bill Clinton grew up.

Today, Hot Springs is the home of Arkansas' only horseracing track, a national park, vast lakes, crystal mines and countless historic bathhouses. Downtown, its Central Avenue is lined with eccentric shops and museums dedicated to curiosities and mobsters.

Hot Springs has also hosted the oldest documentary film festival in North America for the past 25 years. The silver anniversary festival is October 7-16, and everyone is gearing up for a big celebration with more films and special guests than ever before.

But it's been a tough road for the Hot Springs Documentary Film Festival to get here.

The Documentary Capital of the World?

Lauren Wissot, a filmmaker, critic and former HSDFF director of programming, says that festivals in New York City and other big cities are often predictable, but Hot Springs is anything but. "It's an oddball, off-the-wall festival, and that's exciting," she observes. "It's really quirky and fun. It has character."

The festival's executive director, Courtney Pledger, agrees that Hot Springs is definitely a unique spot for a film festival. But HSDFF's success is tied to its location in the city's downtown. All films are screened at the historic Arlington Resort Hotel & Spa, built in 1924, with the parties and other events a short walk away.

"It's very romantic, but, at the same time, it's edgy," Pledger says. "There's still a feeling of the 1930s. As we get the word out on that, and as the festival grows, the terminology ‘destination festival' will become more and more a description of HSDFF."

Destination festival was certainly how veteran actor James Whitmore saw it when he attended the first HSDFF in 1992. He was quoted at the time as saying, "[Hot Springs] could be the documentary capital of the world."

A group of artists and arts activists in Hot Springs created the festival as a community event. Lorraine Benini, one of the founders, who was involved with the festival for its first 12 years, recently chronicled the story in the Hot Springs Sentinel-Record ahead of the 25th anniversary.

Benini writes that after she and her artist husband moved to Hot Springs in 1988, they were visited by Little Rock architect Bill Asti and his screenwriter friend. "They shared their idea and enthusiasm for a film festival focused entirely on documentaries," Benini writes. "They said they had support in the film world in California and wanted to learn if Hot Springs was interested in hosting this event."

HSDFF officially launched in 1992, with significant counsel from both the Academy of Motion Picture Arts and Sciences and IDA, and screened the Academy Award-nominated and IDA Award-winning docs from that year. Along with Whitmore, Sy Gomberg, then co-chair of the Academy Awards documentary committee, was a special guest at the festival, as was IDA's then executive director, Betsy McLane.

Whitmore encouraged the festival and touted the value of documentary film. "He spoke about the important work of the filmmakers who often did not have the budgets or the celebrity actors of most feature films, yet they strive to bring to light significant topics and subject matter that might otherwise be lost to time," Benini writes.

The inaugural festival also set the tone that continues today of making documentary filmmakers feel like stars. That commitment came after Benini overheard Whitmore's wife, actress Audra Lindley, comment that at the Academy Awards, photographers' flashes often stopped when the documentary filmmakers arrived because no one knew who they were.

Its second year, in 1993, HSDFF featured 44 films, and special guest James Earl Jones proclaimed the festival as "one of the genre's most important venues." In 1996, HSDFF acquired the historic two-screen Malco Theatre in downtown Hot Springs, which would be its permanent home until 2012.

But around 2002, rumors began that the festival was having problems. There was ongoing tension with the HSDFF board and Hot Springs community leaders—so much so that many questioned whether the festival would happen at all in 2011, its 20th anniversary.

That's when the real trouble began.

In early 2012, there were reports that HSDFF was more than $350,000 in debt, owing about $185,000 on the Malco Theatre and $150,000 on a nearby parking lot. The bank filed foreclosure proceedings, but later withdrew the suit once a buyer for the theater was found.

Courtney Pledger took the helm of HSDFF in 2012 and is credited with saving it. "But, I didn't do it alone," she insists. "Most festivals have cycles. For the couple of years before I came on, [HSDFF was] struggling and there was some debt. Really, it was a combination of trying to relieve that debt and find some smart ways to hit the restart button - and then regain the support and also look around to see what's going on in the documentary world."

Pledger was a natural choice to lead the event. She was born in Little Rock and had an extensive career as a film producer and film executive in Los Angeles and London, as well as several acting roles on television and in theater.

When she took over in 2012, Pledger had only about six months to organize the entire festival. Two months before HSDFF's opening in October, it found itself without a permanent home. A microburst storm caused extensive roof damage to the Malco and embedded a large flowerpot into its exterior brick wall. That's when the Arlington Hotel came through as HSDFF's new home and has hosted it since. "It gives it a really special feel," Pledger says. "People hang out in the lobby between films. You walk by and hear people talking about what they've seen.

"Having been to a lot of other festivals, not a lot takes place in that concentrated of an area," she observes. "That makes it filmmaker-friendly, filmgoer-friendly and industry-friendly because people are not just disappearing and going to a different venue. They're all hanging out."

Steve Arrison, CEO of the Hot Springs Convention & Visitors Bureau, says the accessibility of the filmmakers makes HSDFF special to the community: "People are not held back by the velvet ropes here."

While an official economic impact study has never been done, Arrison estimates that the festival brings in several million dollars to the city each year. But, he admits, "It's hard to put a value on it. It's a great asset to Hot Springs."

According to Pledger, the 2015 HSDFF drew about 10,000 people, and she expects an even bigger crowd this year.

The HSDFF is emerging as a must for documentary filmmakers worldwide. In 2013, it was designated an Oscar-qualifying festival for the Documentary Short Subject category. This honor helped turn the festival around, Pledger points out, because it enhances its prominence in the filmmaker community, even for filmmakers not bringing a short.

For the 25th anniversary, organizers have included a few throwbacks and a nod to the future of documentary film. In all, 120 films will be screened this year, pared down from the nearly 1,600 submitted or invited.

The festival's early days always featured a screening of The Rocky Horror Picture Show, even though it's not a documentary. This tradition will be revived this year and hosted by Barry Bostwick, who played Brad Majors in the film. The documentary tie-in will be a preview of the forthcoming The Rocky Horror Phenomenon.

Previous festivals also included a celebrity co-chairman. When HSDFF put out a call to fill this role for the anniversary, there was such a huge response that two were chosen - actors Beau Bridges and Louis Gossett Jr., who is featured in Maya Angelou: And Still I Rise, which will be screened at HSDFF.

Over the past 25 years, many film festivals have launched. Some are still around; some are not. Despite its struggles, what's kept the Hot Springs Documentary Film Festival going is the support it gives to and receives from the documentary film community, Pledger says. "That got the attention of the Academy," she continues. "In the early days, they were thrilled to see someone showcase documentary filmmakers and not just narrative filmmakers."

The proliferation and popularity of film festivals has led many festival organizers to examine what's really working with their events. What will keep HSDFF around for another 25 years is maintaining its uniqueness and its niche. "Not that you want to compare yourself to other people, but there has to be, in any industry, an awareness of what's going on across the board so that you can find your particular role and your particular specialty," Pledger explains.

Erica Sweeney is a journalist based in Little Rock, Arkansas.