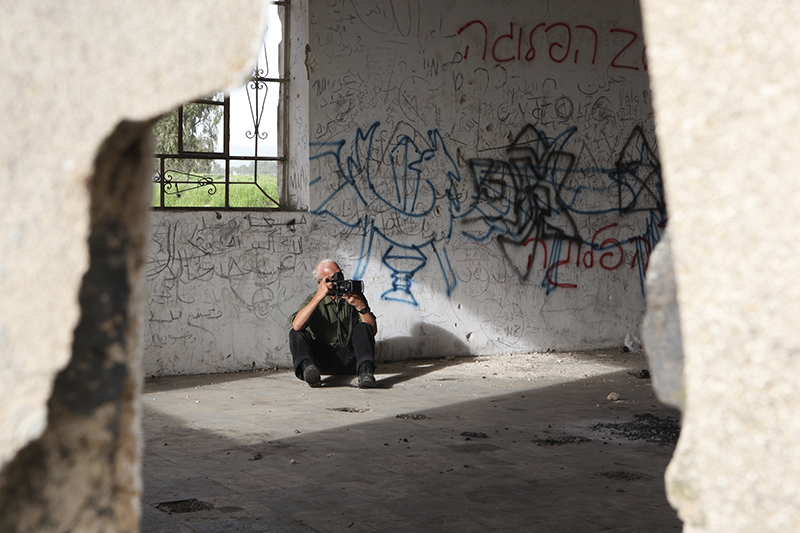 Docaviv, based in Tel Aviv, is one of the most animated and serious documentary film events of the year, as well as the most important annual showcase for Israeli documentaries. This year's edition, which ran May 19 through 28, showcased over 100 international and Israeli films, alongside events, platforms, workshops and master classes, and attracted over 50,000 attendees, and 30 national and international print and media journalists. In October and December, Docaviv will tour with smaller curated programs to Ma'alot Tarshiha at the center of a mixed Muslim/Jewish/Christian population in the Galil, and to the desert town of Yeruham near Beduin enclaves in the Negev. It will also screen at the National Library in Jerusalem.

Among the prize winners were Vitaly Mansky's Under the Sun (Best Director, International Competition), which follows Zin-mi, a young girl in Pyongyang, and turns into a meta-doc about making a film in North Korea; Death in the Terminal (Dirs.: Tali Shemesh, Asaf Sunry; Best Israeli Film, Best Original Music and Director Award), which traces a single terrorist's attack in October 2015, at the Beersheva bus station; and Pieter-Jan De Pue's Land of the Enlightened (Artistic Vision Award), about groups of Afghan children who carve out a life in the war zone, controlling trade routes for leftovers of the conflict. Docaviv 2016's theme, "New World Disorder," foregrounded films about ongoing civil wars, the collapse of physical and social boundaries, the waves of migrants and immigrants walking towards Europe, and international terrorism. 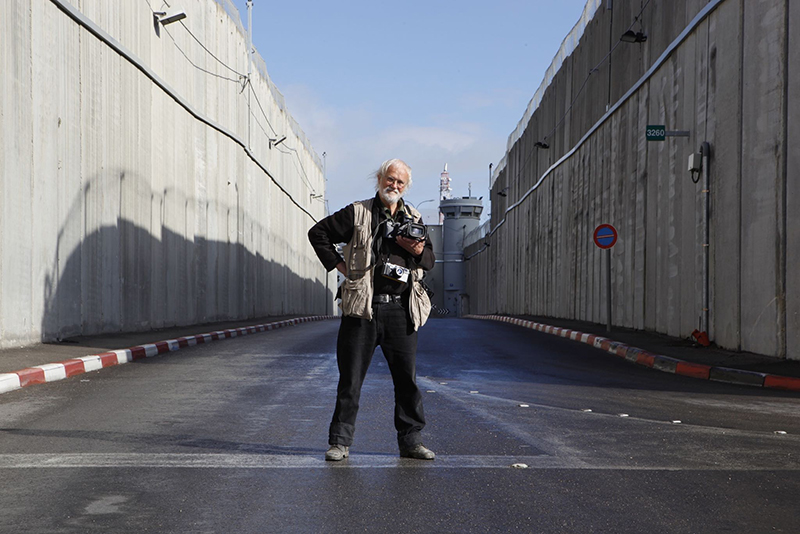 Gilad Baram's Koudelka Shooting Holy Land, which screened as part of Docaviv's Art strand, begins in the utter silence of an image: an alley of two high walls that shape a corridor. A white traffic line between them leads to where the perspective should find its vanishing point, but only meets a dead end with surveillance cameras, floodlights and barbed wire. There is no prospect, just this passageway towards the fortified entrance to Rachel's Tomb, a founding mother sanctified on the West Bank. "I don't want your politics," famed Czech photographer Josef Koudelka admonishes his Israeli handlers. "I want landscape." But he had chosen to join what was to become a five-year project towards a major museum exposition entitled This Place, in which 12 international photographers were given free reign to move about the country and shoot where and what they pleased. Koudelka had chosen the areas on both sides of "the wall," Israel's concrete and barbed wire barrier which, when completed, would separate some 23,000 Palestinians from the estimated 547,000 Jewish settlers now in the occupied territories. "The man is not an idiot," one of his handlers says. "He knows that the landscape is the war."

Baram, a Bezalel Arts Academy student in photography who had come on as Koudelka's assistant, learned to shadow his mentor, capturing his tempo-rhythm, his process, his way of being. The film is not just about a master photographer and his work; it's about learning from that master, whom we first meet with his back to the camera, taking the measure of his own shot. The road stretches out before him. He crouches, leans to one side, and stays deathly still, until "click," the shutter releases and he's up and spinning around, giving us all a broad grin. And it is at this instant that the photograph that Koudelka has just taken fills the screen and grabs us by the throat with its sharpness and density of hues in blacks and greys and with a dusk light glistening on the rain-wet road, recalling to us a place of no tomb, no burial ground in this given world. With this opening, Baram establishes his signature formalist construct: reveal the site, follow Koudelka's process, reveal the resulting photograph and keep it on the screen for a long time. It is a magnificent opening to a painful and beautiful film in which two photographers—the ageing artist and his apprentice—move together through an exquisite and tortured land, speaking little, but showing us much. It is the quietest film about war and art I have ever seen, and it is a stunner.

Since he took his first photographs in Prague—in 1968, as Soviet tanks rolled into the Czech capital to occupy it—Koudelka swore off photographing war. "I never photographed any violence except in my own country," he explains in the film. "There I was a soldier too. A soldier does what he is told."

This is what Koudelka does to get his shot: he descends slowly to the ground, pausing after every shift in position. He crawls through the rolls of barbed wire and sets his camera on the ground. He leans on an elbow, and lifts the camera with one hand. All this is done with the sensibility of a mime, each movement rounded out to conserve energy.

This is what Baram does: He understands tempo-rhyhm—Koudelka moves slowly; the film must move slowly. Koudelka waits; Baram waits. Koudelka speaks softly; Baram barely speaks at all.

Koudelka Shooting Holy Land premieres in the US on July 25 at the San Francisco Jewish Film Festival. 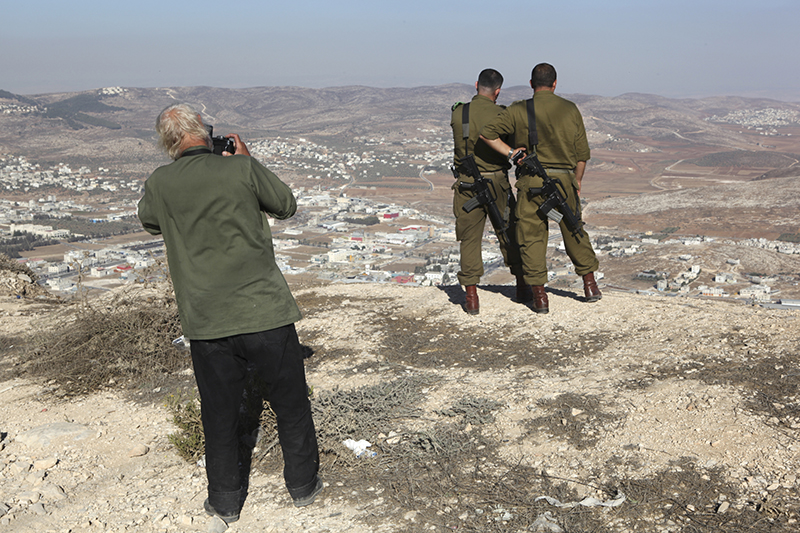 Vitaly Mansky's Under the Sun has been widely reviewed abroad since it premiered last November at DOK Leipzig in Germany. The film is driven by two core scenes, neither of which the director would have been able to take out of North Korea had he not kept his camera running continuously (which his handlers didn't understand), and recorded on two memory cards, only one of which he handed in at the end of each day's shooting. What the authorities didn't approve, they erased. What Mansky had secreted away shaped his exceptional film.

The scene I call "The classroom, anonymous" lasts barely 80 seconds, and is a close-up of the face of protagonist Zin-mi, then an intense close-up of the hands of a student I call "Anonymous," then Zin-mi's face again. For all its brevity, it stuns the viewer, and is the first of two "performative events" that turn the entire film around.

The classroom is the site for model teacher and model students to perform for the camera, at the behest of the North Korean officials. The teacher is filled with the "extra-daily energy" to keep a close rein on her students, who sit upright, attentive and responsive. Anonymous' head is cocked at an angle, a positioning of the body in "alternation of balance," and Mansky captures this moment in which his subject is both enormously present and off-balance. This scene calls to mind the writings of Italian/Danish theater director and theorist Eugenio Barba, who, in his book Theater Anthropology, discusses "alternation of balance" and "extra-daily-energy" to describe the unnatural aspect of body/mind functioning, essential to achieve that special, intangible quality in performance known as "scenic presence." By a shifting of normal balance from basic body posture (vertical) and daily movement dynamics, to a precarious extra-daily balance (diagonal) demanding a much greater physical effort, this art-body accrues to itself a special power and aura. Art and crisis are diagonal. While I make no claims for Mansky being informed by Barba, the theorist's work allow us to see better how the filmmaker shapes his slow events.

Living and performing on the diagonal is potentially dangerous—one might lose one's balance. Such danger demands, "Look at me," and look-at-me events are what Mansky wants in his frame; they are more theatrical and seductive than just standing straight or "keeping together in time," as in an army close-drill or North Korean crowd performance. The term is historian William McNeill's in his Keeping Together in Time: Dance and Drill in Human History, where the author argues that "keeping together" and the rhythmic movement, and shared feelings it evokes, has been a powerful force in uniting and controlling human groups. 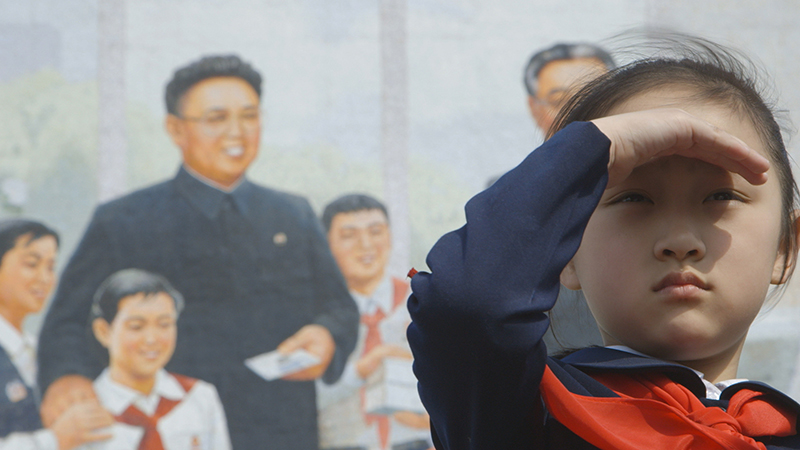 McNeill's term is very useful in describing and theorizing North Korean group and crowd performance in public ritual events—the repetitive and strict training towards the communal/"vertical"—while also serving in strong contrast to the unacceptable eccentricity of the "diagonal."

Moving alone and obsessively is how Anonymous lives in her "real" daily life, and Mansky fixes on her and her fearful performance of anxiety. In full view of the camera, she twists her lips, wrinkles her nose and eyebrows, widens her eyes, massages the sharpened point of her pencil with nervous fingers, wrings her hands in compulsive repetitive distress, and finally opens her mouth wide and utters a sharp click. Here is an expressive language of "alternation of balance," all her own: vocal and physical. Whether or not informed by a neurological disorder, this is a "performance," clearly objectionable in the North Korean classroom, and certainly not to be documented and exported.

But Mansky has caught his first visual objective correlative of the wounded emotional landscape of the state. He had never used intense close-up in his film, and would use it only twice again, when there was something to "see" in a subject, both outside and inside. "The reason I decided to shoot about kids is that the child is closer to freedom; later, there are shackles," Mansky explains in a Skype interview. "I am shooting on the borderline between a natural habitat and an unnatural one. So, I follow the reaction of the young girls, including their reactions to their surroundings. And then ‘Boom': I catch each response."

In a scene with Anonymous and in "Zin mi [intense close-up)," where we are present at the breakdown of the young girl's systems of coping with the regime's challenging demands, Mansky seizes embodied events that show the emotional toll exacted as North Koreans are instructed from earliest childhood to emulate the "utopian reality" propagated by their leaders in everyday life, reversing the process of mimesis such that everyday life is positioned to imitate the represented reality imposed by the North Korean State. 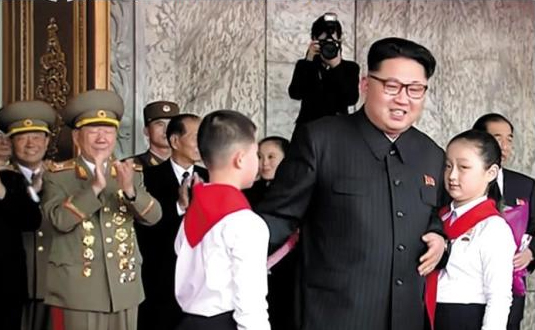 Off camera, the interlocuter asks, "Zin-mi, what do you expect of life since joining the Children's Union?" Zin mi's mouth is shaking and she's holding back tears. She stares straight at the camera. The voice of a handler instructs, "Calm her down…stop her crying." Mansky's intense close-up is compelling, yet, he admits, "I prefer to do more long shots. I want the composition to be a panorama, to let each viewer choose individually what to watch. The extreme close-up here, however, provides a forceful tool to make the viewer taste the salt of the tears, to experience real feeling. A film is holistic. When a scene stands out, when there is a long and more static scene, it points the way to other faster and more active scenes."

Just weeks ago, Zin-mi stood on the stage of the National Party Congress in Pyonyang, with Respected Leader Kim Jong-un, becoming the most famous 9-year-old in North Korea. Under the Sun has never been shown in North Korea, so no one knew who she was. A skilled person had been sent to film Under the Sun in a public cinema screening in another country, and returned with a copy for the appropriate people. The film was vilified and the appropriate people have begun using Zin-mi for their own purposes. Society has noticed her.

Under the Sun is now playing in 150 cinemas in South Korea, and opens in theaters in the US on July 6 through Icarus Films.

Annabelle Winograd is a professor of theater and film and a theater critic, writer and director. She spent the center of her career at the University of Tel Aviv, Israel where she chaired the Theater Department and has been Visiting Professor for the past 13 years at Dartmouth College, where she is now Visiting Scholar.