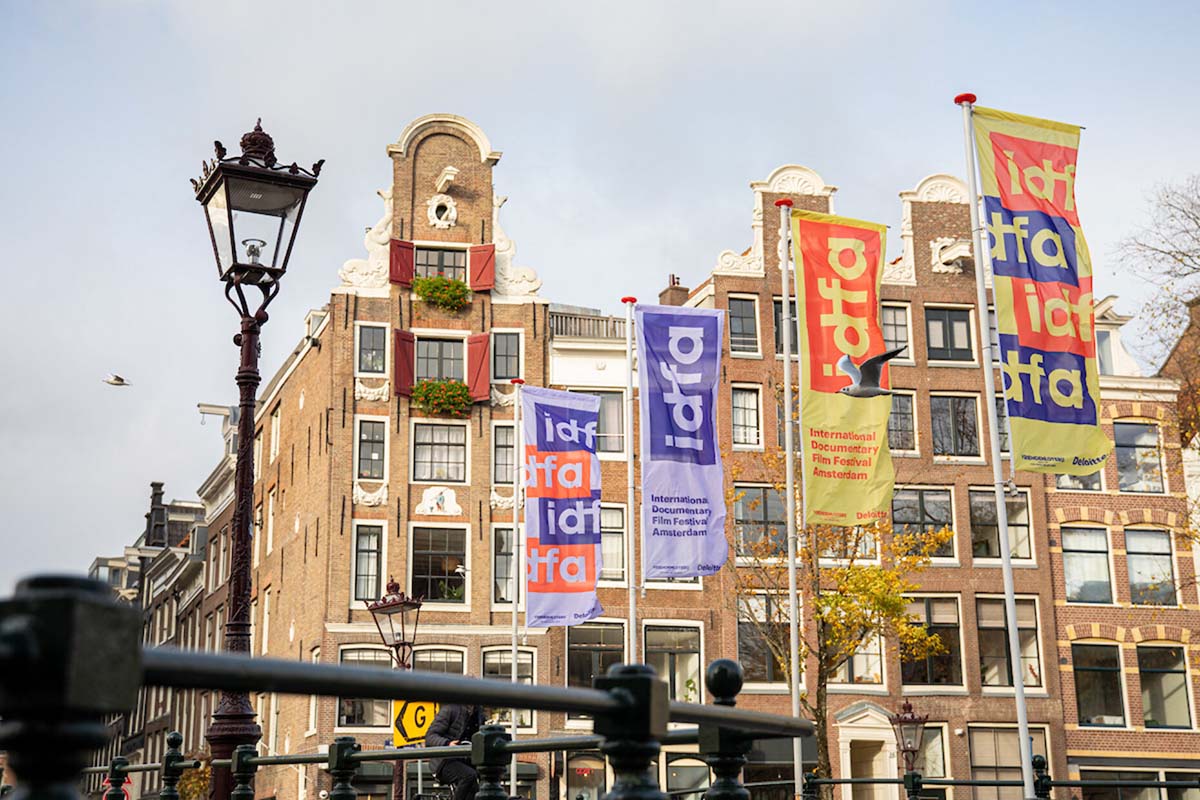 This year’s International Documentary Film Festival Amsterdam (IDFA) was (once again) a hybrid affair. Which left me, like many nonfiction aficionados attending remotely from around the globe, feeling a bit conflicted. On the one hand, I really longed to return to covering in person—to see, say, Dziga Vertov’s newly restored “lost masterpiece” The History of the Civil War—screened only once before, exactly a century ago—at the grand Tuschinski (recently rechristened “Royal Theater”). Or to swing by De Brakke Grond for DocLab Live. (Though, to its credit, IDFA DocLab did provide a free online exhibition. That said, I still had to skip all those mind-blowing VR projects since I don’t have a headset at home). On the other hand, traveling all the way to The Netherlands to take in the world’s biggest documentary film festival during not just a raging pandemic but a partial shutdown (that turned into a lockdown by closing weekend) isn’t exactly the sort of memorable experience I typically sign up for.

Fortunately, between the Press & Industry library, and the slew of screeners I hunted for and gathered from publicists, there was plenty to keep my mind busy—and my jaw dropping, starting with the no-brainer winner of the International Competition, which nabbed awards for Best Film and Best Editing. To be fair, Sergei Loznitsa’s humbly titled, riveting epic Mr. Landsbergis really should have put the master director in a category of his own. Indeed, how does one compete with a meticulous four-hour distillation of the breakup of the Soviet Union from the POV of the titular Vytautas Landsbergis (now 89, but still wry and spry), Lithuania’s very first president—who provides a truly revelatory, counter-Gorbachev narrative?

Moving swiftly from present-day, sit-down interviews with Mr. Landsbergis (“mister” being a word Gorbachev mocks in the film’s opening) at his summer cottage, to a ridiculous amount of archival footage capturing multiple angles on crucial historical events (did everyone in Lithuania own a camcorder in the ’90s?), Mr. Landsbergis provides a striking glimpse into the behind-the-scenes negotiating and backstabbing that led to Lithuania becoming the first independent country sprung from the disintegrating USSR. It was an outcome far from inevitable—and uneasily impermanent—as the former president makes abundantly clear.

The word “perestroika” is about as slippery as our definition of “states’ rights,” its innocuous connotation consciously well-honed. Lest we forget, the Communist reformation plan was an “opening” only so far as to preserve the USSR—to give those rebellious Soviet nations pondering independence an inch so they wouldn’t take a mile, so to speak. (And we all know how that turned out—especially Putin.) Seen in this light, and specifically through the deft lens of both Loznitsa and his no-nonsense protagonist, Gorbachev’s reputation-laundering in the decades since suddenly appears as thorough as that of his American counterpart, Ronald Reagan, their criminal meddling in other countries conveniently buried side by side beneath a kumbaya “heroes of Cold War diplomacy” narrative.  “He still doesn’t realize that his own inadequacy is to blame,” Landsbergis bluntly asserts when the subject of Gorbachev’s unwillingness to take responsibility for the breakup comes up. To this day the former Soviet statesman prefers to blame Yeltsin.

Though ever the diplomat, the Lithuanian politician’s accusing Gorbachev of “inadequacy” is actually pulling punches. In archival footage of a ceremony for those slaughtered by Soviet troops, a priest poignantly implores the mourners not to cry for the dead, but for those who’ve “fostered lies and violence” over the past 50 years. Or as Mr. Landsbergis optimistically declares when he finally gets to address the UN General Assembly as president of free Lithuania at the end, “Falsehoods cannot reign forever”—defiant words of wisdom that echo across both borders and time.

And as communism was crumbling, a Camus-quoting criminal with an IQ of 142 was behind bars in the splintering Czechoslovakia. Upon release, the philosopher thief “didn’t convert to the market economy,” as René Plásil slyly puts it in Helena Třeštíková’s René—The Prisoner of Freedom, the Czech auteur’s long-awaited sequel to 2008’s René. A triumph of decades-long filmmaking, Třeštíková began following her punk-as-hell protagonist when he was just an 18-year-old delinquent in 1989.

Dubbed the “lovable criminal” by the Czech press, Třeštíková’s outcast protagonist is a natural-born media darling, someone who proudly points out that in the history of world cinema, he’s the only leading man to have robbed his director. How Třeštíková herself feels about this is a bit of a mystery; other than taking the stage for that first scene’s packed premiere, she remains pretty much behind the lens. That said, there is one troubling encounter in which the lawbreaking drifter “reveals” to the filmmaker that his girlfriend is “a boy,” choosing to give Třeštíková this transphobic scoop rather than the fawning journos. I have to admit, I was stunned. Why was this “news”? Of course the androgynous petite Tereza is trans; were we supposed to assume otherwise?

Of course, I’m certain René would have little patience with my taking offense on behalf of anyone—especially a lover who’s attracted to him precisely because she likes “uncertainty.” “Conscience is a nice thing, but you don’t eat off it,” René blithely asserts at one point. Which leads one to wonder if this flouting of intellect may in fact be just another coping mechanism. Upon contracting syphilis, René’s initial instinct is to mention that Maupassant died of it, as did many great writers. “I don’t want to judge the quality of their criminal performances,” he rather disingenuously offers about the common thieves he’s served time with. They just have “no ambition.” René prefers the wrongdoers who study the latest locks, or new tax regulations in order to break them. The life of the mind trumps any moral code.

While in prison, René passes time working on a comic book that combines Solzhenitsyn and Jack London. Nothing is allowed in solitary confinement, he writes, save for “unwanted memories, regrets, disappointments.” He has an illegitimate teenage son who is afraid to leave juvie—and afraid to take care of himself. Prisons run on the powerlessness of inmates, René rightly explains. But isn’t everyone outside those confining walls—from the guards, to the female groupies, to the rabid media, to even the filmmaker herself (whose original film made René a celebrity in the first place)—complicit in his own powerlessness as well? In the end René speaks of Sisyphus accepting the absurdity of existence, and embracing it—perhaps the best coping strategy of all.

And laughing at the absurdity—specifically of the artistic process—in order to keep from going crazy from self-doubt is an m.o. likewise embraced by Oscar-nominated director Oliver Hirschbiegel (Downfall). The German filmmaker’s ingenious collaboration with contemporary artist Albert Oehlen and film and theater actor Ben Becker has resulted in The Painter, a Teutonic-flavored, Christopher Guest-style sendup of both the art world and the opaque craft itself. For a riveting 90 minutes, we watch as the bombastic Oehlen struggles in his sunlit studio to spin creative gold from a blank canvas—a solitary pursuit (carried out with great fanfare for a visiting film crew) that actually results in a completed work—but here, “Oehlen” is actually Becker, while the real Oehlen, who serves as writer and producer, is painting off screen.

Between Becker’s brilliant timing—and a hilariously pompous voiceover courtesy of Charlotte Rampling—The Painter is also comedic gold. We watch as the tortured artist alternates between using brushes and black socks, and he calls out for his assistant to alphabetize his paints or to bring him something to drink. We listen as the omnipotent female voice dispenses words of (dubious) artistic wisdom: “You have to see the stupidity to give it order”… “You have to alienate people. They don’t necessarily have to notice”… “Every stroke on the canvas should be in harmony with the cosmos”…“The most beautiful color is nothing but brush food.” (To which the painter also adds such succinct gems as, “Etching is for losers.”)

So by the time Becker’s Oehlen starts chanting “monster truck” like a mantra—soon to be followed by shouts of “Michael Jackson! Falco! Motörhead!”—we know we’ve been taken gloriously over the top and off the rails: the feeling one has in the presence of great art.

END_OF_DOCUMENT_TOKEN_TO_BE_REPLACED

Pop Czar: New York's Post-War Art Movement Through One of Its Essential Champions