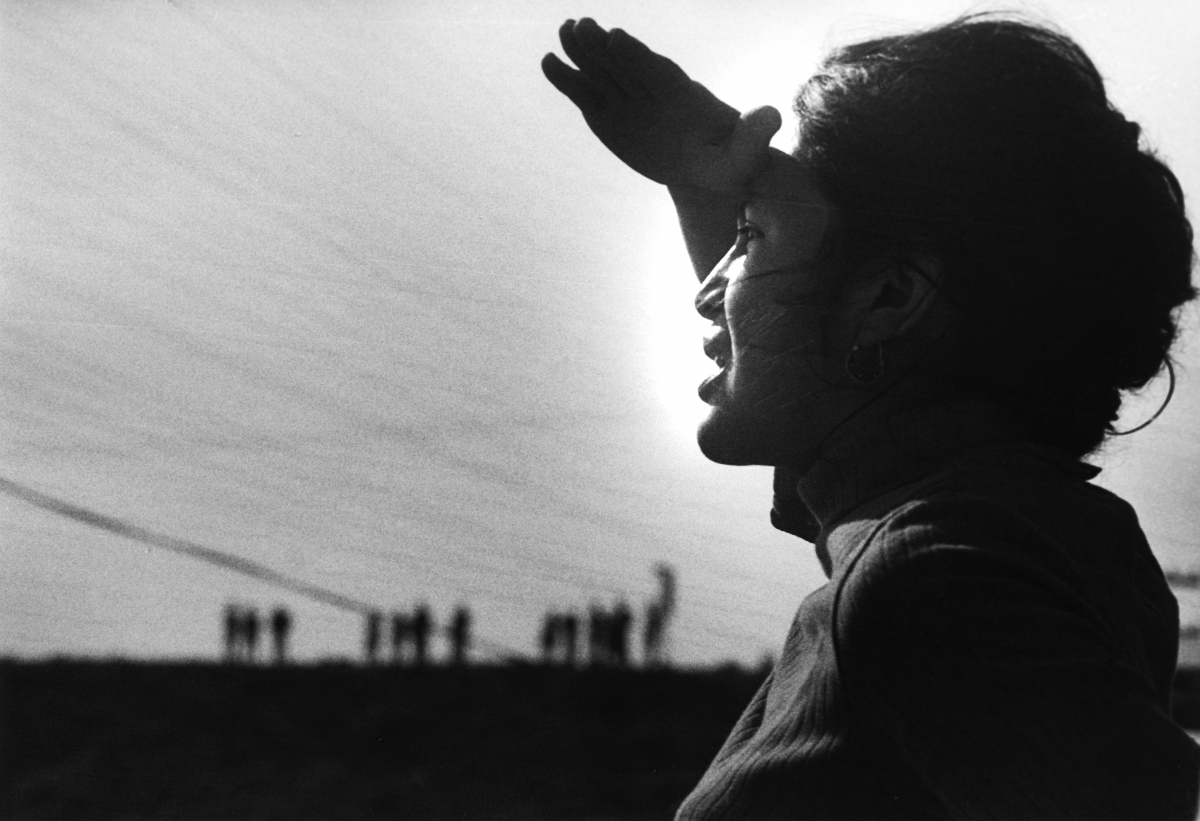 Almost a decade ago, a charismatic young candidate for US President, Barack Obama, stirred and inspired the crowds with the phrase "Yes, We Can." But few people are aware that this confident, hopeful slogan started out in the fields of California, as "Sí, Se Puede," and was originally coined by Dolores Huerta.

Huerta, together with Cesar Chavez, was the co-founder of the United Farm Workers (UFW) union. She fought tirelessly to improve the rights of farm laborers, helped organize the Delano grape strike in 1965, and was the lead negotiator in the workers' contract that was created after the strike.

Huerta is a petite, indefatigable, steadfast, courageous and dedicated activist; her detractors and opponents have labeled her a libertine, a firebrand, an agitator, and a profligate, neglectful mother.

As a recipient, from President Obama, of the Presidential Medal of Freedom, Huerta is undoubtedly one of the most prominent advocates of workers' and immigrants' rights alive today. Yet her role as a labor leader, civil rights champion and feminist over the past six decades has been often been relegated to a mere footnote.

Dolores, the debut documentary from filmmaker Peter Bratt, seeks to redress that balance and inform us of society's debt to her. Documentary spoke to Bratt last month after a screening in Los Angeles' Cinefamily.

What was the genesis of this film?

Peter Bratt: Back In 2009, in the days leading up to the release of my second feature, La Mission, Latino activists asked people and businesses across the country to boycott the state of Arizona for passing SB-1070, a controversial senate bill that gave police permission to racially profile Latinos. I was faced with the dilemma of whether or not to go to Arizona to promote the film, so I called Dolores Huerta for her advice. Before I could finish explaining my predicament, Dolores said, "Our Latino people need stories like this more than ever. Not only should you go, but I'll go with you!"

And so, true to her word, she did go with me, and helped introduce the film. I was amazed by her warmth, charisma and presence. I watched her warm interaction and tireless enthusiasm with the audience, and I wondered why there wasn't a film about such an important and influential figure. I remember thinking, "If only I was a documentary filmmaker…"

Fast forward five years later, when the phone rang out of the blue. On the other end was Carlos Santana. In a quiet and urgent voice he said, "We need to make a documentary about Dolores, while she's still with us."

Three-and-a-half years ago, we had no idea that we'd be living with the current administration. So it seems like this film has, for me personally, an urgency. I'm so glad Carlos Santana had the foresight and the vision to get this film made.

How have audiences responded to the film?

The film premiered at the Sundance Film Festival in January on the day of the inauguration. The inauguration happened in the morning and there were people crying in the streets. People were devastated. There was even one woman who said, "I'm going to go see this movie, Dolores. I need church right now." And people came and I think it was the balm, the medicine that they needed at that point. But it was an amazing day I'll never forget. She got a 20-minute standing ovation at the premiere, and Carlos was there. It was his first time he had ever seen the film with an audience, and he was just blown away. He even declared on stage, "This is the greatest song I've ever written."

And the next day, Dolores led the march through Park City, the Women's March, and it was exhilarating. I think she even sees what’s happening right now as a great organizing opportunity. A lot of people feel hopeless. But we've heard from many people that Dolores' example in the film gives them a reboot: "OK, we can be sad, we can be upset, but we've got to get up tomorrow and we've got to go out and we've got to continue the work."

What was it like entering the field of nonfiction for the first time?

At first, there was a little bit of hesitation. But with Carlos asking, and Dolores excited about the idea, it was just kind of an opportunity and the honor of a lifetime. So I got over my hesitation real quick. And then once I started the research and dove in—I come from a narrative screenwriting background—I just approached it in the only way that I knew how, which is to come at it like a story. I wrote a treatment and plotted it out just like I would a narrative, using the historical facts and then the archival footage.

Did you look at the archival material before you started shooting?

No, because it's an ongoing process of discovery. You're crisscrossing the country, going to archives in Chicago, New York, universities, private vaults. So it's a long process of discovery, just like the interview process itself. And that's the one thing that was a little more unnerving than narrative filmmaking: You're kind of walking the high wire without a net. You're just hoping and praying that you're going to discover story elements in the process. So I had a general structure outline. But I had to fill in all the other things—the personality, the heart and soul of the film. You have to discover that. And that can be a little unnerving, but it's also exhilarating when you come across something. You say, "Oh my God, this is going to allow us to do this!" And then also making the decision not to use a voiceover, a narrator, and letting the archival and the interviewees really tell the story.

No narration was written after the film was edited, yet her voiceover is so perfect and poignant.

I think that just speaks to who she is. What's really remarkable about Dolores is that she's so articulate and has such a grasp of the material, 30, 40 years ago and even now today. And so you can see the consistency over the decades. It's remarkable.

The editing is absolutely superlative. What was it like editing a documentary, which is a completely different beast from a feature film? Documentaries are really made in the editing room.

I worked with Jessica Congdon, and I had worked with feature editors before, but I like what you just said: In doc filmmaking, you're discovering so much of it in the editing process. The editor, as far as I'm concerned, in a documentary, is really your co-director. You're formulating, you're bouncing back ideas and pushing each other and trying things and experimenting. The relationship is so much more complex than in the narrative process.

How long was the editing process?

We were filming over a two-and-a-half-year period, and then we were still compiling archival going into year three-and-a-half. So there would be stops and starts, and there would be long stretches when we had tons of material. We had an archival producer, Jen Petrucelli, and I had given her a 40-page treatment. She was going off of the structure, and that narrowed down and informed her search. And then of course, we found this incredible gold mine of material. It's the only interview, and it's very lengthy, of Dolores and Cesar sitting down together in front of the camera; it was shot on 16 millimeter. It was in great condition. We used as much of that as we could.

You're constantly cutting between the past and the present.

And cutting back and forth between past and present, we [wanted] to submerge the audience in the present tense. That was the objective. We tried to make it as cinematic as possible.

Was it difficult to get her children to open up to you?

It took a little while to gain the family trust, but I think once the trust was there, there was a deep rapport and then they just opened their hearts. And I approached it with an open heart. They were crying a lot, and so was I. I was so moved by their story. And I could personally relate to it on some level because I was brought up in the late '60s and '70s, the movement days, and my mother was also an activist and a community leader. My mother's house was the land headquarters during the occupation of Alcatraz in 1969. Native Americans came from all over the country. And then also leaving school and traveling around the country, going to demonstrations. And my mom also went to jail and I just could relate to it on a lot of different levels.

What was your biggest challenge in making this film?

The biggest challenge is the length of the process of doc filmmaking. With narrative [projects], the script is written and then you shoot it in so many weeks and then you're in the cutting room and you have complete control of the narrative. In the doc-making process, you're kind of held prisoner by circumstance and the process of discovery, the archival material, of scheduling interviews around real-life people who have busy lives.

What did you learn about yourself in making this film?

I learned a great deal, but I think probably the thing that sticks in my mind, when I began the film, [is that] I had no idea that we would be living in this political climate today. I got very discouraged at the result of the election. And sometimes I just want to give up. What's the use? But having hung out with Dolores and going around with her, you reflect on her life and what she's been through. She's seen people killed around her and almost dying herself, and then she gets right back up, always looking forward. It was staggering to me and it affected me on a deep level. It kind of renewed my own spiritual and emotional fortitude. And I realized, I'm not going to give up. And I needed that injection of inspiration. And I also love that she's such an authentic person and voice. She speaks without filters. And that was just a great joy making the film.

Darianna Cardilli is a Los Angeles-based documentary filmmaker and editor. Her work has aired on Bravo, A&E, AMC and The History Channel. Her articles have been published in Documentary, Dox and VivilCinema. She can be reached through www.darianna.com.