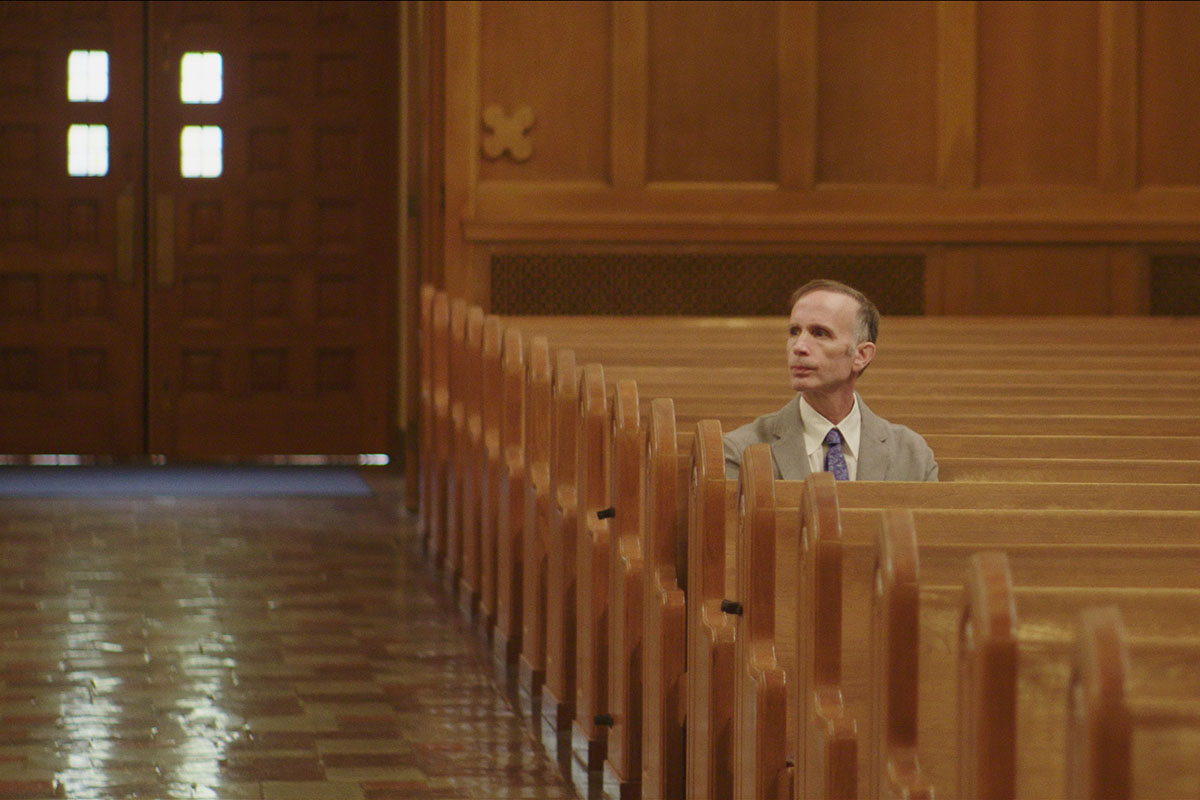 “I think every film, fiction and nonfiction, should have a drama therapist as part of the team.” That’s a bold declaration from documentary filmmaker Robert Greene, whose latest film, Procession, has a simple but daring premise: He collaborates with six men, who were sexually abused by Catholic priests as children, to dramatize scenes from their past and, in doing so, help them come to terms with their trauma. That is fraught, potentially re-traumatizing territory, so Greene and the victims worked with a registered drama therapist named Monica Phinney throughout the resulting film, and that partnership not only allowed Procession to reach the heights it does, but also illuminates a path to more ethical, inclusive and expansive filmmaking.

That path is one that Greene has walked over his past three films, and looking back, it is possible to retrace the footsteps. Kate Plays Christine (2016), an investigation of newscaster Christine Chubbuck’s on-air suicide, and an examination of actress Kate Lyn Sheil as she attempts to play the role for scenes included in the film, was the polar opposite of Procession. It ends with the actress struggling to pull the trigger in a recreation of the fateful telecast before telling off Greene and carrying through with the performance, as if to analogize the exploitation of such a dramatization with the exploitation that so unsettled Chubbock. Its value resides in the effectiveness with which it refutes a desire to “understand” fundamentally incomprehensible acts, and in how effectively it deploys genre tropes—not just of investigative films but, thanks to a fantastic score by Keegan DeWitt, even horror films—to demonstrate how exploitative such attempts can be. “It was a very destructive film,” Greene reminisces. “It was like, ‘Storytelling shouldn’t exist, filmmaking shouldn’t exist, I shouldn’t exist.’ It was obliterating.”

Greene’s next film, Bisbee ’17 (2018), was a response to that destructiveness, an attempt to make a film in a way that could help people. It is a centenary recreation, staged with Bisbee, Arizona’s present-day residents, of a mass kidnapping and deportation in the mining town. Bisbee ’17 was made and released amid a crescendo of concern over the treatment of undocumented immigrants in the United States, but it is Greene’s keen awareness of the ways in which popular culture can tell—and, yes, exploit—stories, as well as his collaborative and creative approach, that make the film. In one scene with a woman who is playing the mother of one of the strike’s organizers, Greene films a conversation between mother and son with the techniques and lighting of the telenovelas the woman enjoys. Other times, with other people, he opts for the syntax of westerns or some other genre. He refrains from judgment, even as some residents express political views antithetical to his own. Bisbee ‘17, too, ends with the recreation of a traumatic incident, but the follow-up interviews with the cast suggest catharsis rather than negation.

But despite their divergences, Kate Plays Christine and Bisbee ’17 are both investigative in nature. Their revelations are for viewers at least as much as they are for the participants. Greene even admits he came up short in looking after the mental health of his cast. At a Q&A for Bisbee ’17, “Someone asked why there wasn’t a therapist there at the end,” he recalls. “And my answer to that was completely inadequate.” So Greene began another investigation—this time off-camera—into the field of drama therapy, and he began questioning what such a process could look like on the screen, and if it were even possible. Greene cites two significant stepping stones on this journey: reading Bessel van der Kolk’s book The Body Keeps the Score and attending the 2018 North American Drama Therapy Association conference, which took place in Kansas City, about two hours west of Greene’s home in Columbia, Missouri. Shortly thereafter, he saw the abuse survivors’ press conference that opens Procession and initiated the process that resulted in a film that is not investigative, but therapeutic.

The goal was not to educate the viewer or instigate political change, but to aid survivors. Although some of the participants discuss the ways the church has long protected pedophile priests, there is no Spotlight-style investigation taking place in Procession. “The awareness of this creative thinking and these guys just converged,” Greene explains. “It was like, ‘Maybe I can help them.’ And maybe that’s a crazy thing to think, but once you ask yourself if you can help someone, it’s very difficult to shake it. It becomes a duty.” So, with his intentions clear, he contacted Rebecca Randles, the lawyer for all the victims in the Kansas City area, and told her about his project.

Randles admits in the film she was leery—she spoke to a clinical psychologist just to determine what questions to ask Greene—and there is palpable discomfort and uncertainty the first time all the parties meet. The camera captures in close-up the fidgety fingers, nervous tics and shifty eyes of all the players. One survivor, Ed Gavagan, is afraid it will look like he’s exploiting what happened to him; another, Michael Sandridge, does not want to look pathetic or pitiable. Most of the meeting consists of everyone wondering if the project was a good idea.

Despite the shaky start, the outcome of the film is rarely in doubt—the second scene, just after the press conference, is one of the dramatizations, which includes survivor Tom Viviano, just moments before seen in the press conference footage, playing the role of the priest. That allows the viewer to discard questions of suspense and instead bear witness as men of tremendous courage, silenced for as much as a half-century by one of the most powerful institutions on earth, tell their stories and process what happened to them. It also allows the film to depict more straightforwardly how the crew and their protagonists—soon to be collaborators—established trust with one another. The question is not if they would participate in the film, but how they got to that point.

“Trust comes from, I think, giving as much leeway to walk away as possible,” Greene posits. “That first day was really like, ‘Maybe we just don’t do this.’ They knew every single day they could just stop, so every step forward was met with, ‘Well, do we continue to take these steps?’” It wasn’t until Gavagan provided Greene with a storyboard and said he wanted to go back to his childhood church in Wyoming for the first time in 35 years, that momentum began to build: other survivors saw that it helped Ed, so one-by-one, with each other’s support, they began to follow suit.

At each step, however, it’s clear that the participants, rather than the filmmakers, are spurring things forward. “The moment that you [take control away], that is re-traumatization,” Greene responds when I ask him if it was difficult, as a director, to relinquish control. “The last thing I want to do is try to be the person who’s exerting all this control. That’s not why I’m in documentary.” His role was instead to assist them with the creative aspects of their work and bring their scenes to life.

Yet without Phinney’s expertise as a licensed drama therapist, Procession never could have been made. To take her at her word, Phinney is “just letting the art do its job and providing a containment so we can do that safely.” But Greene notes her role was bigger. “[She] was there to listen, to talk, to come up with ideas…to talk through ideas.” Far from just a safety rail, Phinney was an active collaborator. The scene created by Mike Foreman, one of the abuse survivors, could not have happened without her. Phinney helped Foreman—the most visibly angered member of the cast—turn his recreation of a prior meeting with an independent review board that failed to take him seriously, into a wish-fulfillment fantasy. In other words, she was instrumental in providing the film with its most righteous, cathartic and furious indictment of the Church and its collaborators and for helping a man heal at the same time.

Foreman’s scene sticks out for its fantastical approach, but no two in the film are alike. Some are realistic, others stylized with melodrama or even horror flourishes, recalling the recreations in Greene’s two previous features. This time, however, their resemblance to movies we have seen before, as well as the emotional heft they concentrate in such a short period of time, is testament not merely to Greene’s prowess as a filmmaker but also to artistic expression as a means of helping people.

“The history of movies is littered with people being lost in either their fictional persona and doing shitty things or being traumatized by filming their story with a documentary filmmaker,” Greene notes. “But a drama therapist can really help set these really understandable processes that help do the creative work…I think a drama therapist is a great idea for all kinds of sets.” If Procession is anything to go by, it would be great for the movies, too.

Forrest Cardamenis is a film critic based in Astoria, New York. He received an M.A. in Cinema Studies from NYU, and his writing has featured in a variety of publications, including Reverse Shot, MUBI and Filmmaker.

END_OF_DOCUMENT_TOKEN_TO_BE_REPLACED

Bad Religion: 'The Education of Shelby Knox' and 'Twist of Faith'

'On The Record' Investigates Sexual Misconduct in the Music Industry