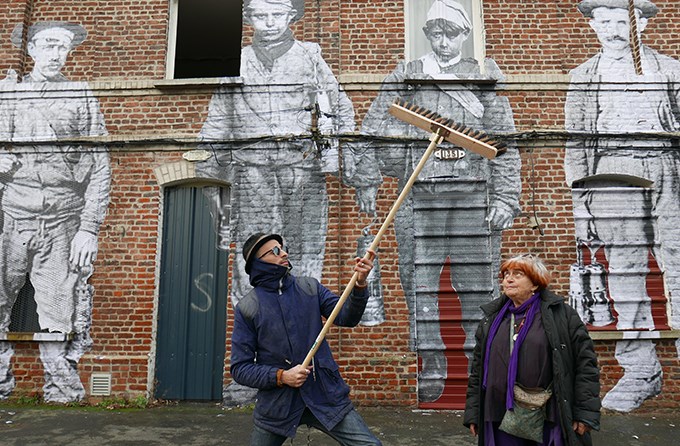 The Belgian-born filmmaker Agnès Varda was the only female director associated with the French New Wave, and for decades she has been referred to as "the grandmother" of the movement. It's a condescending if well-meaning title, and though Varda is universally beloved, she is still more of a adventurer than a traditionalist. The semi-autobiographical documentaries she's made in the past two decades, The Gleaners and I (2000) and The Beaches of Agnes (2008), are works of restless ingenuity that pose consistently intriguing questions about form and process.

For her newest film—and potential swan song—Varda takes another creative leap, teaming up with renowned 34-year-old street artist JR for a humanistic tribute to everyday people, the wonders of the aging human body and the varieties of representational portraiture—which is also to say, selfies.

In Faces Places, the duo takes a road trip through the French countryside in JR's custom truck, equipped with a photo booth that instantly prints large-scale posters. The filmmakers paste these portraits on all kinds of structures throughout these communities, creating wall-size murals that turn the townspeople into temporary icons. During this process, the filmmakers invite them to share their stories, while following their own tangents into the past.

At age 89, Varda still moves and thinks nimbly, adapting to new platforms (her Instagram is worth a follow), turning setbacks (like her failing eyesight) into excuses for creativity, and setting new challenges (Faces Places is her first collaborative project). She will be awarded an honorary Academy Award this year. She's called it "the Oscar of the poor," but will still likely show up to accept the trophy.

Documentary spoke to Varda and JR on a breezy afternoon outside the Blum & Poe gallery in Los Angeles, which is currently displaying work by both artists.

Agnès, you used to live in Los Angeles, and made several films here. What has changed most in the landscape of the city?

Agnès Varda: Things have been built, but it still has what I love so much: A huge city crossed by very long streets. I love Pico. You can go from downtown, crossing very different neighborhoods, ending up at the ocean. For me, it's a very mysterious city. It combines so many things that I love: villages, city, beach. It contains so many subjects of society, urbanism, sociology. And I have good memories here. I stayed here with Jacques Demy right after his huge success with Umbrellas of Cherbourg, so we were welcomed as gods and goddesses of French New Wave for a while.

You've said that fiction filmmaking allows for mastery, and documentary teaches you a kind of modesty.

I say that it's a school of modesty, yes. You are at the service of the subject, these people towards whom we have empathy. JR made a documentary called Women Are Heroes, and went all over the world. We were not so far apart when we met, and we decided to make a documentary.

Your film humorously tells us all the different ways you didn't meet, so I won't ask how you actually met. But I am curious, JR, about your previous experience with Varda's work.

JR: I saw Beaches of Agnès first. When I saw it in theaters in 2007, it really marked me. I knew a bit of her artistic work that she had done in galleries and museums, and suddenly it connected all the pieces of the puzzles, all the films and all the journeys that she had made, and it made me want to meet her. But I didn't know how. So the day I got an email from Rosalie, her daughter, who said, "The two of you should meet," I ran to her house, and that's how we started conversing. And we didn't understand why we hadn't met earlier.

You're both distinguished artists in your own right, and have worked for many years on your own.

AV: I never co-wrote or co-directed.

So why, now, was the idea of a collaboration appealing to you?

AV: Maybe because I thought Beaches of Agnès would be my last film in terms of classic movie distribution. I did other things, exhibitions. So, I don't know, we got very excited about doing something together. And when we started, we thought we could do more. What about making a real trip, because of that funny magic truck he has? We could use it. I could have made a documentary on his work. But the way we met, we decided to join our two ways of approaching images. Documentary images don't have to be totally realistic. And in the documentary we made, we tried to reinvent reality. We came from reality, like the dockworkers in the harbor. By building the tribute to their wives, we used their same tools for another project.

JR made a big documentary, Women Are Heroes. He went all over the world filming women, in India, in Africa. It meant, to begin with, that he is interested in women.

How did you push each other creatively? Were you critiquing each other's approach as you worked?

JR: We were looking for bridges to make the images on paper make meaning in the film, and especially to highlighting the people we met. That was the main objective of the film: To highlight people who have no power, who you don't get to hear in the media, and give them a place so you get to know and hear them. So naturally, because that's the common sense of our artworks, we were very naturally directed to do the film this way.

AV: Most of the time, we were doing the interviews together. We were sharing the right to question, the right to listen, to push the ideas somewhere. It's not a newspaper journalist question-and-answer. We tried to have conversations in which people felt at ease. We shared things about our own work. Documentary became a way of sharing life.

You document, but your life exists during the time of the documentary. So we kept the sense of "this is our life," even though we dedicate ourselves to making the people we film more important than us.

You've made several follow-up "sequels" to your documentaries. How do you maintain a connection to the people you film in a documentary, and why is that so important to you?

AV: When I did The Gleaners and I, I would go to festivals, and people would say "beautiful." They would put me in the good hotel. I would get some flowers. But I would think: what you applaud are the people I filmed. Their courage, their way of turning the shame of getting the garbage into a position on life, criticizing society. And yet I'm in a good hotel and they're still outside. Two years after, I went back to the people I had filmed, because it's totally unfair, documentary, most of the time. You get the credit, you get the applause and they're still in the shit. It's an endless problem—how much we wish to share the medium, but how much we get the credit and they don't. Documentary's always very complex for me.

I say "meetings," people we met, not "subjects." Sometimes people say to me, "I love that character that you did." But they are not "characters"; they are people.

People who write about this film keep calling it "delightful."

But I do think there is a sincerity; it's not a cynical film.

AV: We hate cynicism. Can I [paraphrase Italian Marxist theorist Antonio] Gramsci? When you look at the world, you can only be pessimistic, but when you get into action, you have to be optimistic. And I believe in that. We are not stupid. We have seen the world. The attacks in France. All over the world people hating each other. Migrants all over the world, crossing borders, being beaten one way and then the other way, too. Don't think we don't see that. But should we add comments to that, to what we read and hear every day? We tried to make our film light. But to call it "exquisite" feels like an assault. Maybe it's graceful to give words and power to these people, but it's not charming.

JR: As artists, we need to be utopists. We need to bring this kind of energy because the media is doing the opposite. We didn’t expect our film to be funny. We are just ourselves. That's how we approach the people we meet.

Faces Places is currently screening in theaters across the country through Cohen Media Group.