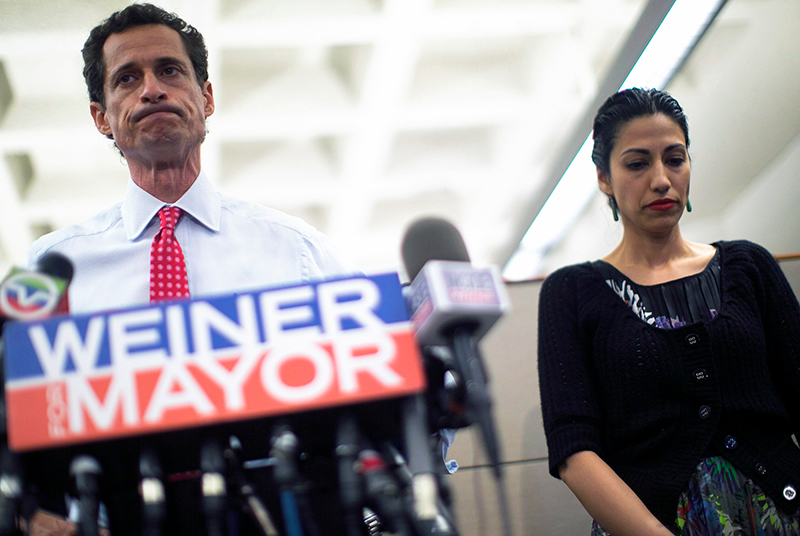 "Man is by nature a political animal," Aristotle famously wrote, but in reality, it takes a special breed of man to be a politician. This is quite evident upon viewing Weiner, a documentary by Josh Kriegman and Elyse Steinberg. The Grand Jury Prize winner at this year's Sundance Film Festival, the film is a captivating roller coaster ride following Anthony Weiner's 2013 New York City mayoral campaign—from his unexpected comeback from political disgrace and rapid ascent as a favorite, to a new round of sexting revelations, leading to his precipitous decline in the polls.

By their very nature, most electoral campaigns are frantic behind the scenes. But Weiner's campaign has to deal with a media frenzy and damage control of a much greater magnitude. Wherever this modern day Icarus goes, the camera is there, capturing the team effort, the arduous hours, the grueling fundraising, the constant handshaking, the hounding by the press—but also the more intimate, private moments of a man who has been mocked so frequently and unabashedly. 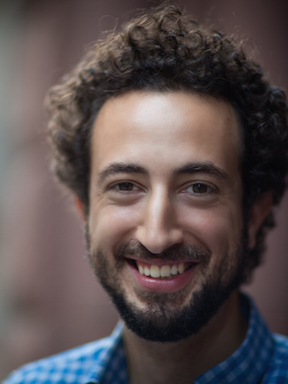 The unprecedented access to the candidate was certainly helped by the fact that one of the filmmakers, Josh Kriegman, had worked for Weiner when he ran for mayor in 2005, and had been his New York-based chief of staff when he served in Congress.

"I got to know him well through that work," Kriegman says. "Then I left politics and started working in filmmaking. When Anthony got caught up in his sexting scandal and ultimately resigned from Congress, I started talking with him about the possibility of doing a documentary about his story. That was a conversation that went on over a couple years, trying to figure out if this was something that he would be comfortable with. And then when he decided to run for mayor of New York City in 2013, he agreed to let us in and allow us to film. So we filmed from the day he announced he was running, all the way through to the end of the primary election. It was about four months. "

What the doc clearly reveals is that Anthony Weiner, despite being loud and brazen and a relentlessly flashy self-promoter, has enormous charisma, abundant energy and a highly colorful personality. "Unlike Josh, I didn't know Anthony prior to working on the film, so in that way I was much like the audience," Stenberg explains. "All I knew was what I had seen in the headlines and news clips, and so I had a very limited view of him. But when I met him and I looked at footage of him, I realized that my preconceived notions of him just did not match the reality of who he was. He's a much more surprisingly human, dynamic character and person."

And most clearly, he is also a natural politician. But that is ultimately his downfall, for, as he admits in the film, "Politicians are wired in a way that needs attention." In fact, Weiner comes across as remarkably insightful, self-reflective and self-aware, conceding at one point in the film that "the same constitution that made me do the dumb thing, made it possible for me to weather the storm without gutting me."

The film frequently intercuts between notorious media clips and how the production of those actual aired segments came about from the campaign's viewpoint, as well as more intimate moments in Weiner's home life, clearly showing the dichotomy between the public and private persona.

As Kriegman points out, "The motivation was for a different version of the story to be documented, to have a camera in the room that shows the more complete version rather than the tabloid story." 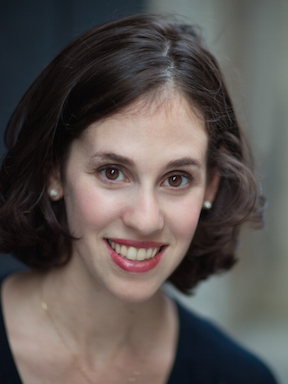 "One of the things that was exciting for us was to show that disparity between what we see in the headlines and in the cable news, and what we see of the human story beyond the headlines," Steinberg adds. "Anthony and his wife had both been reduced to caricature and punch line. Our hope with this film was to show what it really means to be at the center of a media firestorm, and to show them as multi-faceted, complex people who were put in an impossible situation."

Besides his wife, Huma Abedin—who, beneath her sphinxlike demeanor and Mona Lisa smile, is at times a portrait of sadness and frustration—the doc features quite prominently the women in Weiner's campaign, most notably his communications director, Barbara Morgan. Just like Huma, she is unflappable and stoic in the face of disaster. They are the yin to Weiner's yang.

"Huma is a fascinating person and a remarkably talented public servant," Steinberg notes. "She's obviously much more quiet and reserved than Anthony, but her story is really interesting to us in terms of the judgment against her—she had been judged for her decision to stay in the marriage. Shouldn't a woman be able to make her choice without judgment? Why should women be judged for the mistakes made by their flawed husbands?" 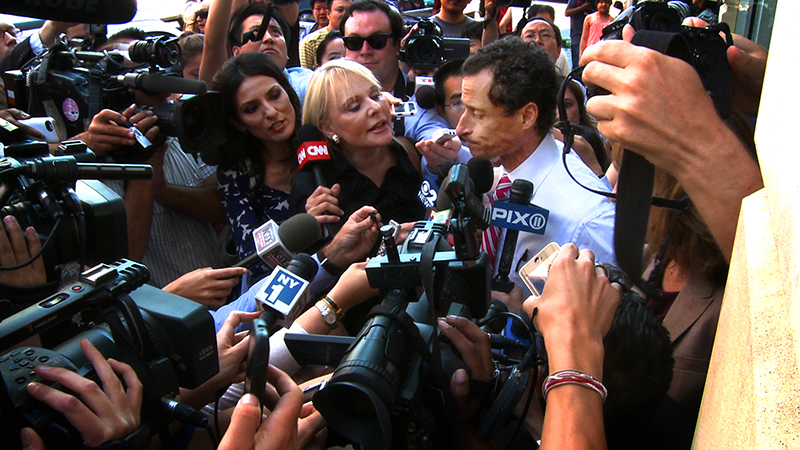 The film is a tragicomedy: Despite some profoundly sad, poignant moments as the campaign and staff morale spirals downward, and Weiner suffers a vertiginous drop in polls, it also has many unforeseen instances of humor and levity. "That was important to us, and from the beginning that was something that we wanted to include," Steinberg admits. "We did this because Anthony is a very funny guy. He has this remarkable wit, such self-awareness and energy, and we really wanted the film to have that sense of humor and [for audiences] to be able to enjoy him."

When the filmmakers first embarked on the project, the future of the candidate seemed rosy: Weiner was having a momentous resurgence, and was seen as a man of the people—a true New Yorker. "As filmmakers just following a story, we had no idea what to expect and how it was all going to unfold," Kriegman recounts. "When we started, things were going really well, and everyone on the campaign was pretty thrilled about that. He was defying expectations and he very quickly rose to the top of the polls. From a filmmaking perspective we were excited about the possibility of capturing what really was shaping up to be this really remarkable comeback story. And of course, things took a turn…[Anthony] mentions in the film that ‘we're whistling past the graveyard.' There was a sense that he knew there was a possibility that he wasn't going to be able to get past the conversation about the scandal, which of course is ultimately what happened."

To observe career disappointment and defeat and capture them so intimately can be uncomfortable even for the viewer, let alone the filmmaker. "I obviously knew Anthony well, so I definitely was feeling the intensity of what was going on," Kriegman admits. "At the same time, you kind of have to cultivate a distance from your subjects when you're filming documentaries because you have a job to do and you have to focus on just capturing what you can through the camera. So, it's definitely a balancing act."

Following any campaign, let alone one in full meltdown, poses its own set of challenges. "Campaigns inherently are hectic, chaotic and incredibly demanding environments," Kriegman maintains. "For the vast majority of the shoot, it was just myself with a camera. When we initially started, we had a cameraperson for a couple of days, but it quickly became clear that there really just wasn't room for more than myself. So I ended up doing the bulk of the shooting on my own. It was such an extraordinary kind of labor to be filming all day, every day, through the course of the campaign. To be there, filming through to the end of long days over and over again was definitely challenging. Then—as often is the case, especially with documentaries—working through 400 hours of footage to tease out the story is always a heavy lift." 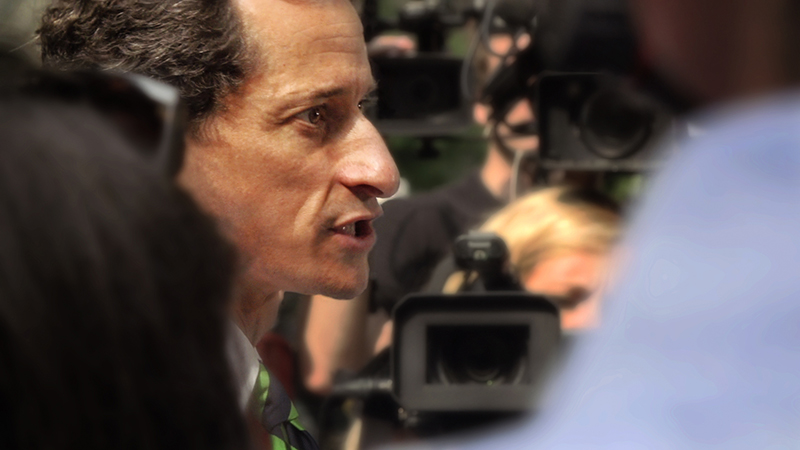 In true vérité style, Weiner never passes judgment on the candidate or his peccadillos— which ultimately amount to no more than a handful of non-physical marital indiscretions and emotional betrayals—nor does it allow him to dodge some very pointed questions about responsibility.

Refreshingly, Weiner never once plays the victim or blames the media. He is fully cognizant of what he calls "the laws of entertainment gravity," and deftly summarizes his obstacles: "I lied to them, I got a funny name and they don't do nuance." Ultimately, the doc is a gloomy commentary on current political reporting: The media circus, focused on scandal and humiliation, does a great disservice to an electorate more interested in issues.

"For us this film is about more than just Anthony or a campaign," Steinberg explains. "It's about how our politics today are just driven by this insatiable appetite for entertainment and spectacle. Political coverage is increasingly designed by tweets and one-liners. And you don't have to look very far, at our current presidential race, to see this spectacle played out, especially with Donald Drumpf. Anthony and Drumpf are obviously very different people, politically and personally. They're on the opposite sides of our politics, but they both understand that in order to have a voice, and be a successful politician in today's 24-hour news cycle, you need to put on a show. And by being brash and having an air of authenticity, you can get votes and you can get attention."

Weiner opens in theaters May 20 through IFC/Sundance Selects.

Darianna Cardilli is a Los Angeles-based documentary filmmaker and editor. Her work has aired on Bravo, A&E, AMC and The History Channel. Her articles have been published in Documentary, Dox and VivilCinema. She can be reached through www.darianna.com.

END_OF_DOCUMENT_TOKEN_TO_BE_REPLACED

Getting Down with the 'Boogie Man': A Nonpartisan Look at Lee Atwater