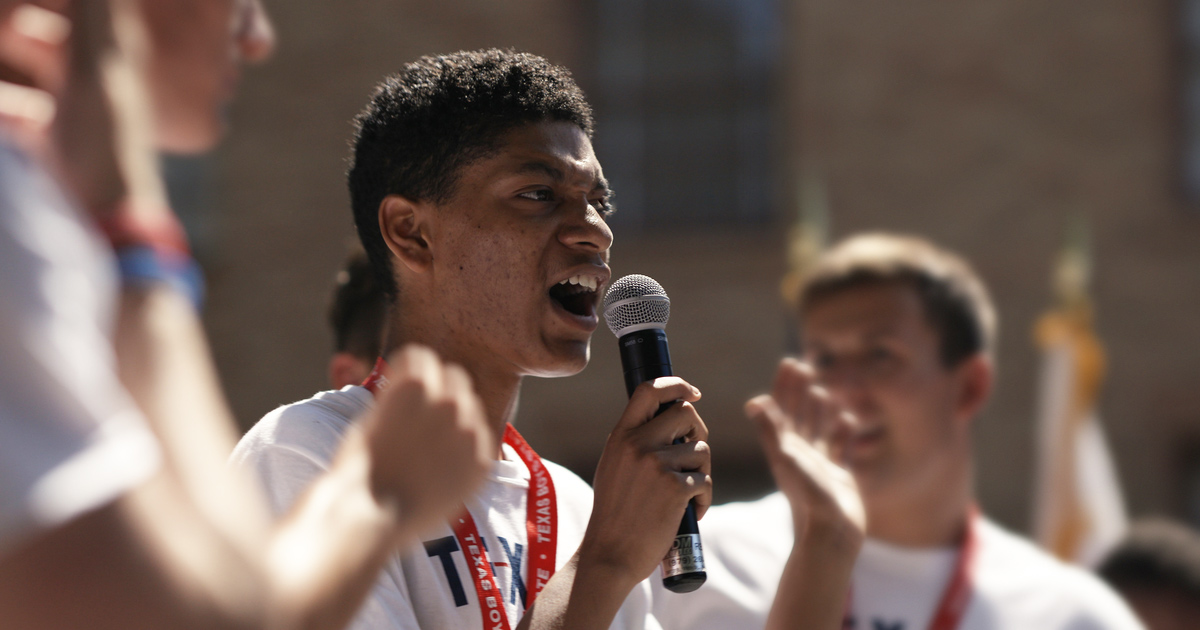 René Otero, one of the protagonists featured in Amanda McBaine and Jesse Moss’ Boys State, reflects on his experiences in the Texas-based program for teenage political aspirants in an Op-Ed in The New York Times.

Boys State immersed me in a culture that refuses to criticize America, confusing praise with patriotism while ignoring the fact that with love comes accountability. I believe that to love America is to be as cynical about our political system as necessary until real change is made, because faith in what worked in the past won’t get us through.

I’m excited that we get to have a festival that is going to give a platform to these filmmakers and is going to connect audiences to them in a different way. In some ways, we’ll miss things about the regular experience of Toronto, but in some ways I’m excited for viewers across Canada who might not otherwise get to experience the Toronto Film Festival to get to experience it from their homes. I do not take it for granted that we get to have this festival this year. There are many film festivals that could not take place this year.

Reporting on the virtual edition of the Edinburgh International Television Festival, Realscreen’s Barry Walsh discusses the panels and lectures that addressed racial equity.

“It is not just the broadcasters who need to be held accountable,” he maintained. “The part of our industry in which most people are employed is independent production. The independent sector need to do better, and needs to want to do better. All companies but particularly the larger ones need to champion careers and spot talent. They need to recognize that many of the young Black and Brown people who have got a foot in the door of our industry have already climbed mountains of disadvantage that their more privileged peers have never encountered and know little about.”

Writing for the Film Independent Blog, Lisa Hasko, Film Independent's Director of Artist Development, explains the process of putting together a recent FIND Forum panel, “Collective Building + Social Change,” and shares what it taught her about thoughtful collaboration around issues of social change.

This panel was selfishly motivated, too. I wanted to know how to be a better collaborator in amplifying the efforts of these collectives (made up of individual filmmakers whom I know personally and professionally) and use my own position of privilege as Director of Artist Development to move the needle of change in our field—one so clearly broken when it comes to equity and inclusion, of which I’m a part. Film Independent has a strong track record of supporting underrepresented filmmakers. However, like most organizations reconciling with how they have harmed or helped our BIPOC, disability and LGBTQI+ colleagues, we know we need to do better.

Black Journal was a landmark public broadcasting program that aired from 1968-1977; staffed by such documentary pioneers as Williams Greves, St. Claire Bourne and Madeline Anderson, the program explored issues about Black Americans that the mainstream media avoided. Last month, American Archive of Public Broadcasting made available 59 episodes of Black Journal; The New Yorker’s Doreen St. Felix examines its relevance then and now.

As I revelled in the archive, my sense of what constitutes the unit of the television hour was seriously upended; “Black Journal” is defined by an oracular, anti-colonial time. Hard reports were gorgeously, patiently rendered, frequently trailing off onto a sensual plane. Watching segments on Compton and Chicago, I was reminded of the rigorously subjective work of the contemporary filmmakers RaMell Ross, Yance Ford, Ja’Tovia Gary, and Garrett Bradley. A profile of the inhabitants and the detractors of Soul City, a planned community in North Carolina, founded by the civil-rights figure Floyd McKissick, segues into a visit with Alice Coltrane, three years a widow after John’s death, at the family estate, and that flows into footage—knowingly titled “a black commercial”—shot at Morehouse College, in which Nina Simone performs “To Be Young, Gifted and Black.” The art pieces were as urgent as the documentaries; after all, “Black Journal” was tracking a revolution.

The venerable publication Film Comment was put on hiatus earlier in the pandemic by its publisher, Film at Lincoln Center. IndieWire’s Anne Thompson polls filmmakers and critics about the importance of this longtime leading authority on cinema.

“Today there is as much great writing on film as there ever was — possibly more — but most of it is online, thus harder to get hold of, more ephemeral,” Haskell said in an email. “The cinema, to its greater glory, is far more inclusive, with the marginal and the overlooked getting their due. But this makes for a massive amount of films competing for our attention. If anything, we need a magazine like Film Comment more than ever, to help us make sense of it all.”

Let me begin by stating the obvious: images in U.S. media—not just images of Blacks, but all images—are highly influenced by the political conditions of the times. Moreover, Black images have not been and still are not controlled by Black producers, and, therefore, these images were created to serve the psychic purposes of those that do control them. Because Europeans originally brought Africans here as slaves to provide service and labor and nothing more, the representations of these slaves were used to rationalize and reinforce their intended place in society. Thus, racial stereotypes came to symbolize the mental restructuring of the African presence in America.